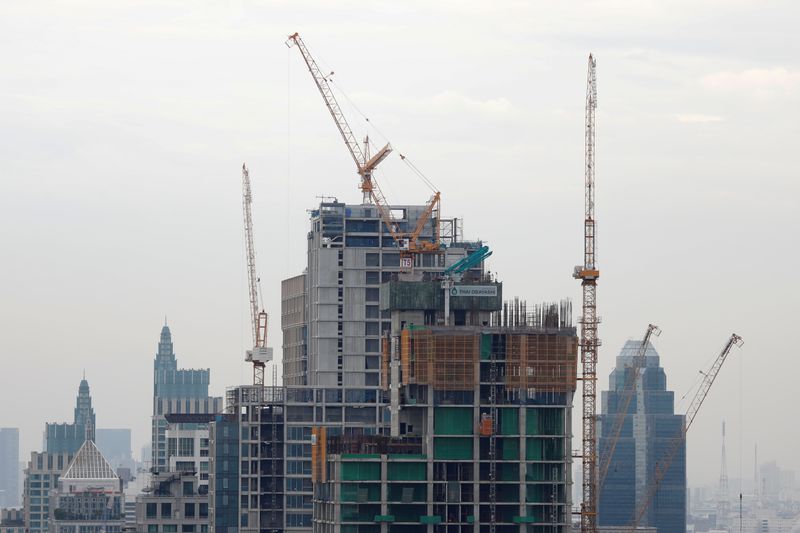 © Reuters. Luxury apartment buildings under construction are seen in Bangkok

By Orathai Sriring and Kitiphong Thaichareon

BANGKOK (Reuters) – Thailand’s economy shrank more slowly in the third quarter, with the contraction limited to 6.4% thanks to a recovery in domestic activity after coronavirus restrictions were eased but an ongoing travel ban has kept most foreign tourists away.

The data released on Monday by the National Economic and Social Development Council (NESDB) showed a marked improvement from the June quarter, when the economy suffered a 12.1% decline, the sharpest fall in over two decades.

On a quarterly basis, the economy expanded a seasonally adjusted 6.5% in the September quarter, the fastest pace in more than eight years, after a record contraction of 9.9% in the prior quarter.

Economists in a Reuters poll had forecast the economy would shrink 8.6% year-on-year and grow 3.8% quarter-on-quarter.

The upgrade came in amid a slump in tourism, tepid global demand, a strong baht

“The Q3 data was quite a surprise but the economic picture has not changed and we expect a decline until the first quarter,” said Thammarat Kittisiripat, economist of Tisco group.

While Thailand has removed most restrictions as local infections slow, its economy continues to suffer from soft global demand and the absence of foreign tourists. It started last month to let some foreign visitors return.

“A rising trend in the number of COVID-19 cases globally during the Northern Hemisphere winter will subdue the economy for the next two quarters,” said Kobsidthi Silpachai, head of capital markets research of Kasikornbank.

On Monday, the NESDC said it expected 6.7 million foreign tourists to come to Thailand this year – between April and early October there were none – after last year’s record 39.8 million with their spending accounting for 11.4% of GDP.

It predicts only 5 million foreign visitors in 2021.

The government has supported the economy with a 1.9 trillion baht ($63 billion) stimulus package, while the central bank has slashed interest rates by 75 basis points this year to a record low of 0.50%.