The Bulls Are Focused On Bitcoin


was clinging to $13,700 on Monday morning but due to increased turbulence in traditional markets, it began to give up positions. The monthly candle closed above $13K for the first time since December 2017 and at the end of last week, crypto market participants witnessed Bitcoin approaching $14K.

This level was too strong a resistance, and sellers entered the game. However, they didn’t have enough strength to put significant pressure on the price.

The U.S. stock indices did not perform well in the pre-election week, which is not the case for Bitcoin. The first crypto coin took market share away from the altcoin sector, with Bitcoin’s dominance index rising by more than 2 points to 63% over the week. The market is now frozen in anticipation of any certainty regarding the U.S. elections. This factor may not only be a growth constraint but it also has potential for correction of the first cryptocurrency. 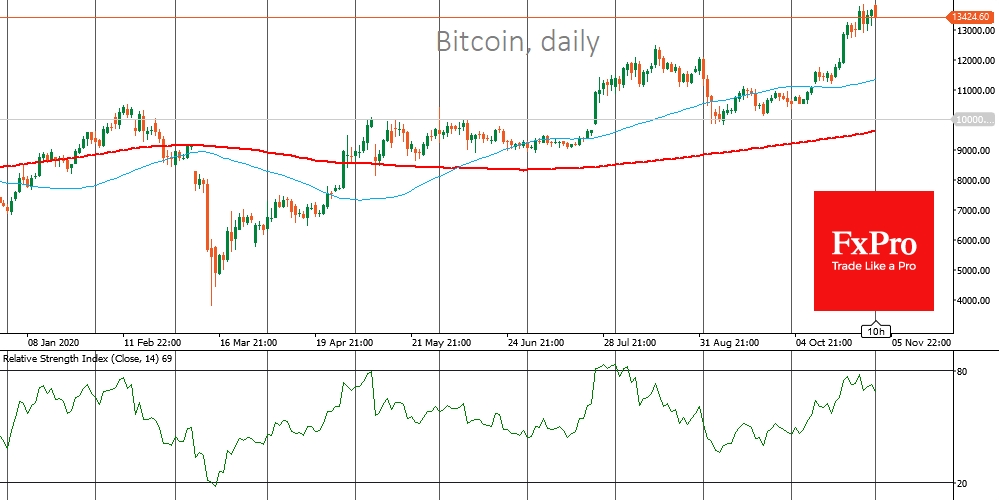 Bitcoin is trading above 10K for almost 100 days

There are several potentially dangerous scenarios: election results will be challenged by one of the candidates for some reason and/or mass protests will start in the country. In case investors start heavy selling the stock market, which is already being kept afloat only through incentives, we may well see a sharp sale of Bitcoin.

In March 2020, against the backdrop of the pandemic, Bitcoin dropped several times, but the coin quickly attracted buyers and is now more than 200% more expensive than the lows of the year.

Another positive factor for Bitcoin is the fact that the cryptocurrency is one step away from setting a new record: 100 days above $10,000. The fact is that, based on statistics, after passing this stage, the coin can show really impressive bullish dynamics.

According to CoinMetrics, when Bitcoin has been trading above a round threshold for more than 100 days ($10, $100, $1000), the coin has serious growth prospects, although the period from $1K to $10K was quite long, taking 150 days. Nevertheless, combined with the probable unfolding of the halving potential and high interest from large capital, we could well see impressive growth in a shorter time.

There is no point in predicting the outcome of the election, while it is obvious that in case of a sharp decline of Bitcoin, a large number of buyers will enter the market, as they have long been waiting for the opportunity to buy at a reduced price. Whatever shocks the global economy may experience this week, one thing is clear: increased turbulence offers huge opportunities for profit, and investors are now facing somewhat of a “holiday season”.