Time To Bet On These 3 Cyclical Stocks After Positive COVID-19 Vaccine News?


Is now the right time to start snapping up stocks whose momentum is closely tied to the health of the national and global economy? On Monday, equity investors were given what could be a major buying signal when drugmaker Pfizer (NYSE:) announced that its experimental COVID-19 vaccine was more than 90% effective in a study of tens of thousands of volunteers.

Investors see a successful vaccine trial, followed by regulatory approval as the only path to normalcy for the global economy which has been battered by months of coronavirus lockdowns and travel bans. The pandemic has so far killed 1.2 million people globally, with more than 50 million people infected.

The prospects of a successful vaccine sometime in the next few months prompted investors to shift their money from the mega-cap FAANG group, which includes Apple (NASDAQ:) and Amazon (NASDAQ:), to cyclical stocks which will benefit from the full re-opening of the economy.

As a result, the , the and the indices all rose to new records. Below, we’ve shortlisted three stocks, from the energy, financial and travel sectors, all cyclicals, to determine which might provide a good buying opportunity if the world begins moving closer to ending this global health crisis.

Shares of energy supermajor ExxonMobil (NYSE:) gained 13% on Monday, after the vaccine news was released, amid brightening prospects for global oil markets. The stock gained another 2.22% on Tuesday, to close at $36.86. 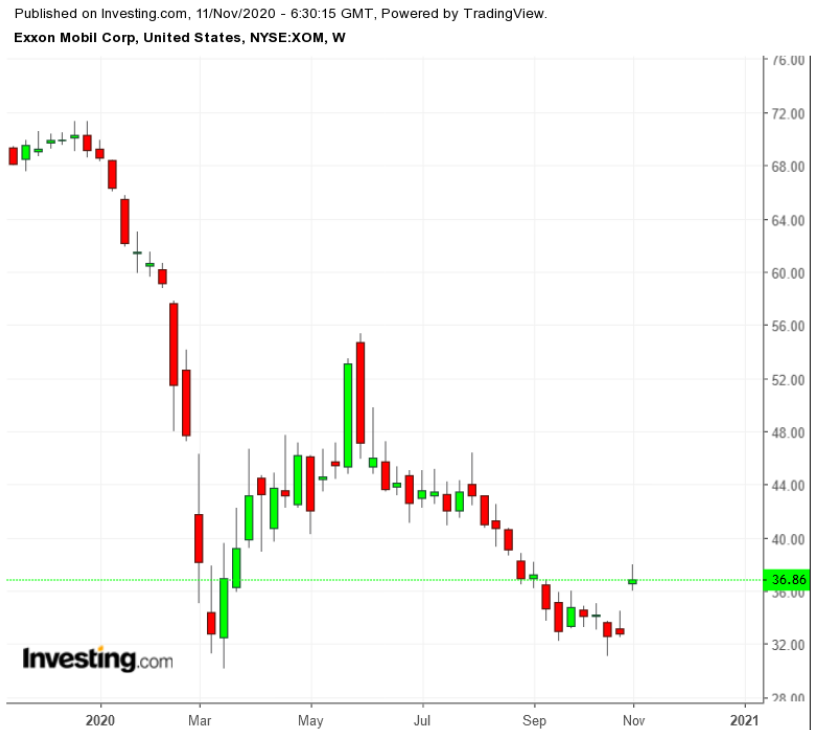 The plunge in prices and fall-off in demand for petroleum products prompted by the pandemic sent shock waves through the world’s energy markets this year. That demand shock was particularly hard for the US oil-and-gas giant Exxon, which was in the middle of a massive expansion of its assets.

But if a vaccine is approved in the next few weeks, it could quickly help revive oil demand, boosting for oil companies. Even after yesterday’s jump in its shares, Exxon stock remains close to its lowest level since 2004.

XOM’s annual dividend yield of 9.65% as of Tuesday’s close shows that investors are extremely anxious about the future sustainability of this payout. In our view, Exxon doesn’t make a compelling investment case over the long-run relative to other opportunities in the energy space.

Among industry peers, the company is the most exposed to negative headwinds, including from oversupply in oil, and liquefied natural gas. That situation is unlikely to change as the energy industry goes through a seismic shift away from fossil fuels.

Banks are purely a cyclical trade, as they’re tied very closely with the direction of the economy. That’s the reason they rallied strongly after the vaccine news.

Among the top banks, JPMorgan Chase (NYSE:), the largest US-based lender, surged more than 13% on Monday, though it closed down 0.33% on Tuesday, finishing at $116.52 at yesterday’s close. Despite the boost, shares are still down around 16% for the year. 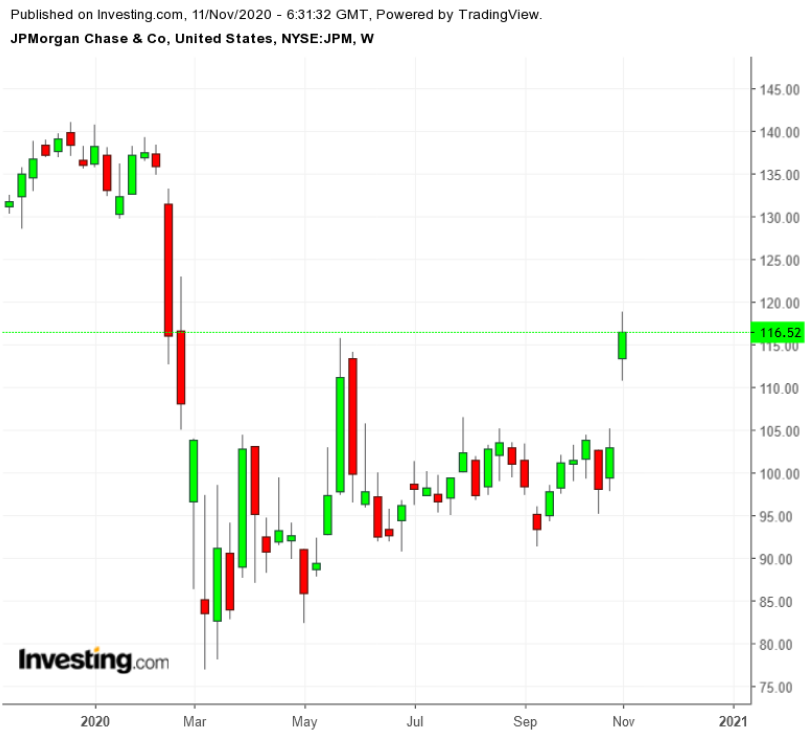 Buying JPM at this level still makes sense, in our view, due to the lender’s balance sheet strength and the quality of its operations. JPMorgan’s diversified business operations are providing cash flows even in this tough operating environment.

During the , JPM’s profit rose 4% even as a recession hammered much of its business for the year. The bank set aside just $611 million for potential future loan losses, far less than expected and the $10.47 billion it booked in the second quarter. The lender’s profit doubled from the second quarter.

With its attractive 3% dividend yield, shares of the financial institution are a good long-term bet for value investors as the economy reopens and government bond yields rise. The earnings potential of banks will improve substantially should the Federal Reserve signal an end to its monetary stimulus in the next few months.

No other sector is as dependent on the successful launch and distribution of the COVID-19 vaccine as is the global airline industry. The pandemic has provided a devastating blow to the segment, as businesses and tourists shunned travel and governments introduced lockdown measures.

The currently depressed situation of airlines could quickly reverse if there’s a vaccine by the end of this year, providing confidence to consumers who might start booking trips once again. No surprise then that shares of American Airlines (NASDAQ:) popped on Monday, gaining 15%, though they were down yesterday, closing 6.21% lower, at $12.38 for the day. The stock is still off by more than 50% for the year. 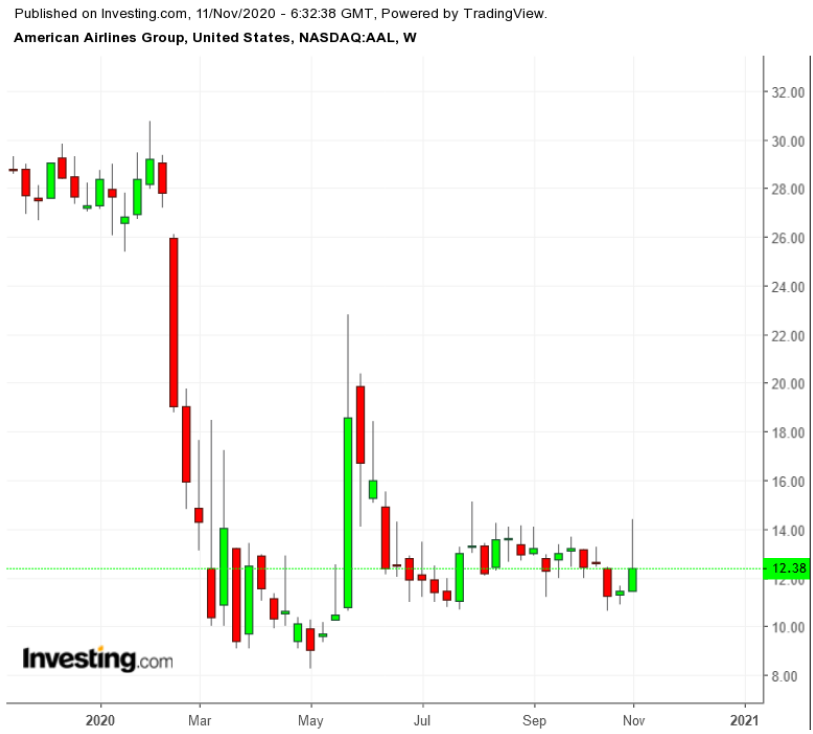 Despite Monday’s powerful move in aviation stocks, we don’t think retail investors should get excited about this industry.  Many analysts expect airlines to face for air travel for the next three to five years, led by corporate travel. This is a big problem for full-service carriers, who garner almost their entire profit via their premium cabins.

Some of the world’s richest investors, including Warren Buffett, have completely bailed out of airline stocks. Berkshire Hathaway (NYSE:), Buffet’s investment firm, announced in May that it had exited its large positions in all four major US carriers—Delta Air Lines (NYSE:), American Airlines, United Airlines (NASDAQ:) and Southwest Airlines (NYSE:).