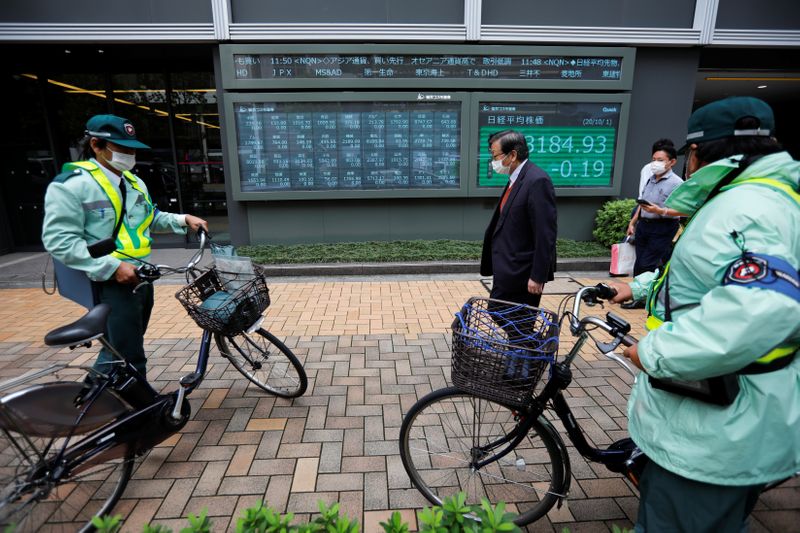 © Reuters. People pass in front of a stock quotation board after the Tokyo Stock Exchange (TSE) temporarily suspended all trading due to system problems in Tokyo

By Stanley White and Eimi Yamamitsu

TOKYO (Reuters) – A hardware failure shut down trading on the Tokyo Stock Exchange on Thursday in the worst outage ever suffered by the world’s third-largest stock market, which said it aimed to reopen on Friday.

The TSE’s first full-day suspension since it began all-electronic trading in 1999 left investors searching in vain to buy back shares after the first U.S. presidential debate.

“I feel painfully responsible for all the confusion this incident has caused for investors and market participants,” TSE Chief Executive Officer Koichiro Miyahara told a news briefing.

It also raises questions over the exchange’s credibility just as Japan’s new Prime Minister Yoshihide Suga makes digitalisation a top priority and could dent Tokyo’s hopes of attracting more banks and fund managers from Hong Kong amid concerns over a new security law imposed by China.

TSE said the outage was the result of a hardware problem at its “Arrowhead” trading system, and a subsequent failure to switch over to a backup device.

Tokyo Governor Yuriko Koike said a quick fix was crucial to ensure trust in the roughly $6 trillion market, which ranks behind New York and Shanghai, data from the World Federation of Exchanges shows.

Many market participants had hoped to buy back stocks or increase holdings after an overnight rise on Wall Street, but were unable to do so, traders and analysts told Reuters.

Smaller regional bourses in Nagoya, Fukuoka and Sapporo were also forced to suspend trade because they use the TSE system, leaving derivatives-focused Osaka Exchange as the only equity market still running in Japan on Thursday

“There will be a huge surge in trading volumes around the U.S. presidential election, and this does raise some concerns about the TSE’s ability to process a large increase in orders,” Hideyuki Ishiguro, senior strategist at Daiwa Securities, said.

“We have to make sure this kind of situation is never repeated,” Japan’s top government spokesman, Katsunobu Kato, told a news briefing, calling it “extremely regrettable”.

While Tokyo has been eclipsed by Shanghai’s market in recent years, it is still a global hub for foreign investors. The volume of shares traded on the TSE’s main board () was an average of 1.13 billion in the past 30 days.

The TSE was prone to technical troubles in the past and was notorious for sluggish trading, although there have been fewer glitches since a new system was adopted in 2010.

Fujitsu Ltd (T:), which developed the trading system, said it was investigating the problem.

The Nikkei () fell 1.5% on Wednesday, its biggest drop in two months, as an acrimonious debate between U.S. President Donald Trump and Democrat Joe Biden highlighted the risk of an inconclusive outcome to the presidential election.