When a central bank announces a formal policy change to lift inflation it’s reasonable to expect that the government bond market would notice. But so far there are few signs that US Treasuries are reacting to last month’s roll out of the Fed’s average inflation targeting (AIT) policy, which is designed to “moderately overshoot” the 2% target for “some time,” the bank’s chair, Jerome Powell, last month.

Since Powell outlined the policy change on Aug. 27 the benchmark Treasury yield has traded in a tight range, slipping slightly to 0.68% on Monday (Sep. 14), based on daily data. In other words, the sharp drop triggered by the coronavirus in the spring continues to hold and the Fed’s efforts to persuade the crowd that a new regime’s in town have so far fallen on deaf ears.

trends, of course, require time to unfold and so the Fed’s dovish policy may eventually be successful. “You’ve got to forecast five and 10 years ahead if you want to talk about average inflation targeting,” says Andrew Levin, a former Fed economist Levin who’s current a professor at Dartmouth. He added:

“Professional forecasters think we’re going to be short of the target for the next few years, which really raises the question, what’s the Fed’s longer-run plan?”

The main focus is whether AIT can shift the long-running disinflation trend that’s been in force in the US and around the world. For many investors and analysts, they’ll believe it when they see the evidence. For now, the coronavirus-triggered headwinds weighing on the economic recovery suggest that regime change for inflation is a low-probability event. Or so it appears via the Treasury market’s implied inflation forecast, based on the yield spread for nominal less inflation-indexed notes.

The implied estimates for the and 10-year maturities, for example, after rebounding in recent months, have stalled above the 1.5% mark – roughly in line with the pre-pandemic forecasts. The market, in other words, seems to be saying that while the sharply lower forecasts triggered by the initial coronavirus shock in March are too extreme, the low-flation trend that prevailed previously still applies. 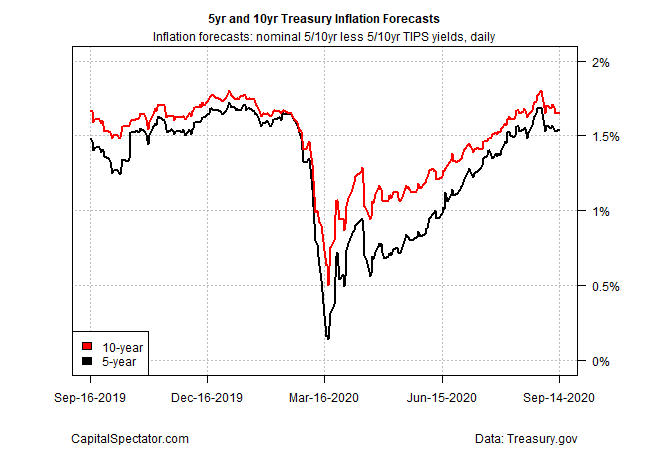 What does the Fed think? Tomorrow’s policy and press (Sep. 16) offer an opportunity to clarify and elaborate, although a number of analysts expect few new details will emerge.

According to Tim Duy, an economics professor at the University of Oregon who pens the widely read Fed Watch blog:

“The Fed meets this week, but don’t get your hopes up for big changes in policy or additional details about the Fed’s new ‘average inflation targeting’ strategy. For the moment, the Fed remains content to simply entrench expectations that the policy path is locked down at zero for the foreseeable future.”

What could change this trend? Dramatic increases in government spending in response to the economic fallout from the coronavirus is a possibility. By some accounts, it’s just a matter of time before the huge upward shift in fiscal stimulus brings higher inflation and higher interest rates. Perhaps, but as long as the economic recovery remains precarious, it’s not obvious that inflation is about to turn sharply higher.

The US economy continues to recover but there are risks that the rebound may falter. Will tomorrow’s retail sales for August suggest otherwise? Economists expect that spending will rise 1.0% vs. July, marking the fourth straight month of growth. Encouraging but the bounce is slowing and the ongoing risk of labor market stress is lurking.

New filings for unemployment benefits have declined and are now far below the peak surge, which lifted claims to nearly 6.9 million for the week through Mar. 28. The latest increase – 884,000 for the week ended Sep. 5 – reflects progress by comparison. But the gain, which matched the previous week’s increase, still reveals a labor market that’s suffering. Prior to the pandemic, a near-900,000 rise in newly unemployed workers was unprecedented since 1967 (the start of the claims data set). No more.

The huge gains in , week after week, suggest that disinflation’s momentum will endure. The political gridlock in Congress offers no hope that a new fiscal response will arrive before the election. That leaves the Fed to explain how AIT will suffice to end or reverse a decades-long slide in inflation.

The stakes, in short, are high for Powell’s press conference on Wednesday. Can the Fed chair change expectations? He’ll try.

“We expect Chair Powell to spend a significant amount of time during the press conference discussing the Fed’s conclusion of the strategy review announced in August,” Nomura economists predicted in a research note last week.

Mr. Powell, you have the floor.