Yields on US Treasuries bounced around on Monday as hopes of fiscal stimulus increased, then just as quickly faded, while Congress and the White House continued to wrangle over the scope of COVID-19 relief.

On Sunday, House Speaker Nancy Pelosi set a deadline of 48 hours to agree on a relief package if it was to get passed by the Nov. 3 presidential election. This powered the yield on the benchmark Treasury above 0.78%, before reports of continued stalemate trimmed the gains to about 0.76%. 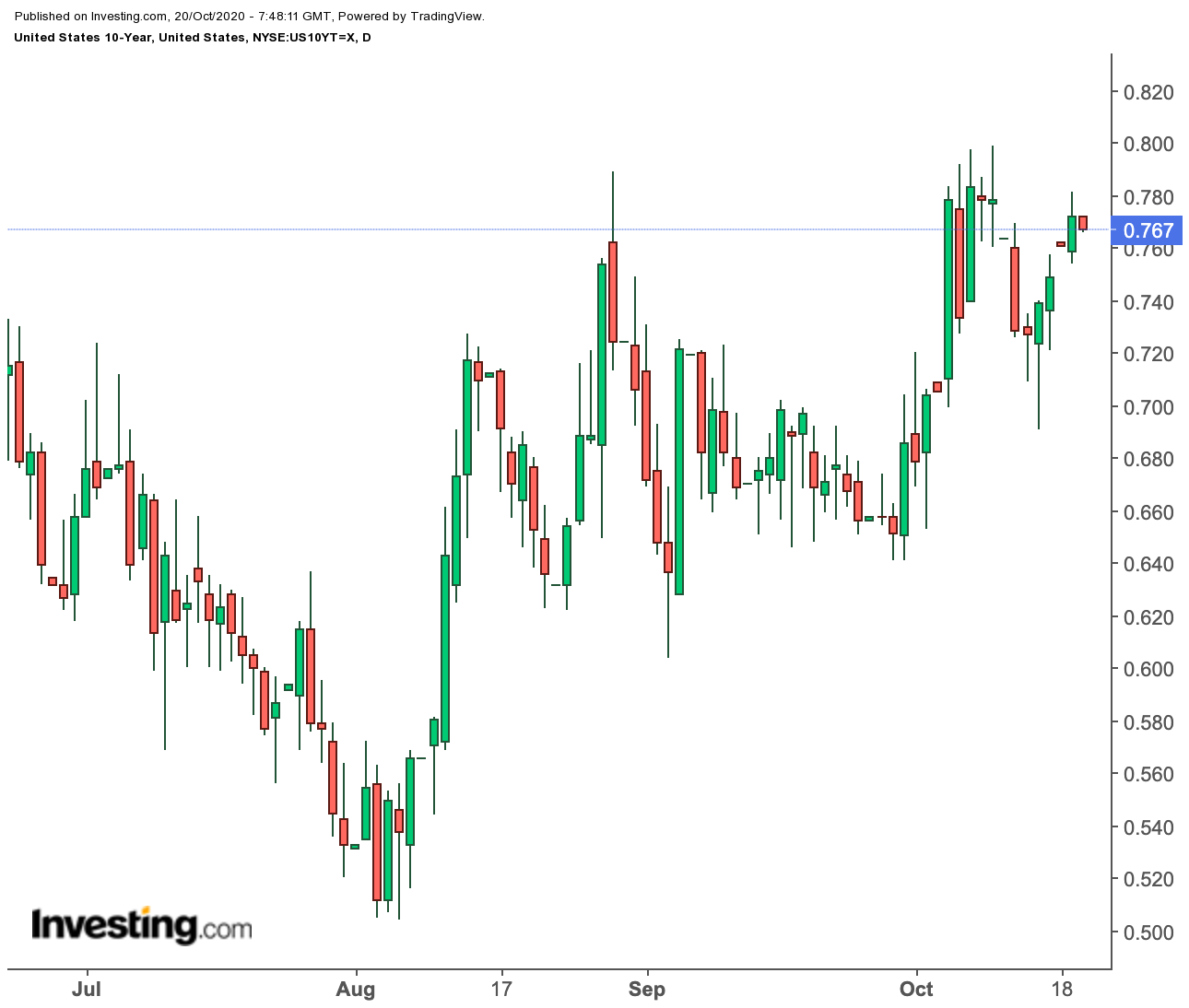 New spending of the order that Democrat Pelosi is seeking—more than $2 trillion—would lead to a flood of new Treasury issues, bringing down prices and boosting yields (yields on bonds move inversely to price).

Looming in the background is the election itself. Polls are showing a comfortable lead for the Democratic presidential candidate, former Vice President Joe Biden, and also suggesting the possibility of a Democratic sweep of both houses of Congress, retaining a majority in the House of Representatives and gaining control of the Senate.

This could also lead to more spending and lower bond prices. But the experience of 2016, when polls showed Democrat Hillary Clinton also comfortably in the lead before she suffered an Electoral College loss to President Donald Trump, is making investors and pundits cautious.

What would be a volatile election under any circumstances is taking place under the shadow of the coronavirus pandemic, and opinion is divided as to the outcome. If Trump gets re-elected or the Republicans retain control of the Senate, there would be legislative gridlock on stimulus or any other form of government spending.

The 10-year Treasury yields have mostly stayed in a narrow range—between 0.50% and 0.80%—since lockdowns went into effect in April, except for a brief spike of optimism in June.

Meanwhile, remarks by Randal , Federal Reserve vice chairman for supervision, suggested that the Fed may have to continue its purchases of Treasuries for a long time, because the government is issuing so much new debt it could overwhelm private markets. The national debt has grown to more than $27 trillion from $23 trillion at the beginning of the fiscal year. Quarles said:

“It may be that there is a simple macro fact that the Treasury market being so much larger than it was even a few years ago, that the sheer volume there may have outpaced the ability of the private market infrastructure to support stress of any sort there.”

For Quarles, it is an open question, he asked:

Quarles subsequently “clarified” his remarks to the effect that he was not suggesting the Fed is providing a permanent backstop to government borrowing. But his musing about an indefinite need gave voice to a suspicion held by many investors that it will be difficult for the Fed and other central banks to wean markets off their bond purchases. The famous taper tantrum in 2013 when investors panicked on the news that the Fed was easing out of its quantitative easing purchases is still fresh in people’s minds.

For now, Fed policymakers are lobbying for more fiscal stimulus but at some point—perhaps if there is a vaccine and the virus infections ebb—the central bank will have to provide some guidance about its intentions in the Treasury market.