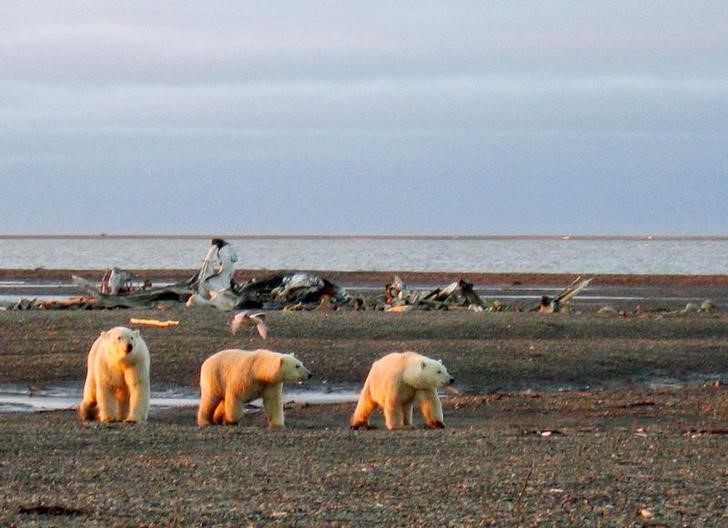 © Reuters. Polar bears are seen within the 1002 Area of the Arctic National Wildlife Refuge

(Reuters) – The Trump Administration will take key steps to finalize a sale of oil drilling leases in the sensitive Arctic National Wildlife Refuge (ANWR) in Alaska just before Democrat Joseph Biden, who opposes drilling there, becomes president, a government spokeswoman said on Friday.

The White House will be sending out a call for nominations in coming days, according to a spokeswoman for the U.S. Bureau of Land Management in Anchorage, Alaska. The call is a request to energy companies on what specific land areas should be offered for sale.

That would start the clock on a 60-day period before sales could take place in ANWR, where drilling had been banned for decades before a Republican-led tax legislation signed in 2017 removed that ban. Biden opposes drilling in ANWR, while lawmakers in Alaska have long pushed to open up the ecologically sensitive area for oil and gas exploration.

“Development in ANWR is long overdue and will create good-paying jobs and provide a new revenue stream for the state – which is why a majority of Alaskans support it,” said Frank Macchiarola, senior vice president of policy, economics and regulatory affairs at the American Petroleum Institute, an industry group.

Following a 30-day period after the call for nominations, the government would have to issue a notice for an impending sale of leases. Thirty days after that, the sale would take place, just before Biden’s inauguration on Jan. 20.

“This lease sale is one more box the Trump administration is trying to check off for its oil industry allies before vacating the White House in January,” said Adam Kolton, executive director at the Alaska Wilderness League, which opposes drilling in ANWR.

The White House finalized a plan to allow drilling earlier this year. The 19 million acre (7.7 million hectares) refuge is home to Native tribes and wildlife populations including caribou and polar bears. In recent months, several big U.S. banks have said they would not finance oil and gas projects in the Arctic region.

“This administration has consistently ignored our voices and dismissed our concerns. Our food security, our land and our way of life is on the verge of being destroyed,” said Bernadette Demientieff, executive director of the Gwich’in Steering Committee. The Gwich’in tribe lives in scattered villages in the reserve and across the national border in Canada.