Trump’s COVID Infects The Market Bounce. Is It Over?

Everything was working according to plan this past week, until Friday morning. As news hit that President Trump and the First Lady contracted COVID-19, so did the market at the open with down roughly 450 points.

Last week’s missive “The Selloff Is Overdone,” noted the decline was orderly and not one of a “panic” induced rout.

“While the sell-off in the market has gotten overdone short-term, we still suggest using rallies back to the 50-dma to rebalance portfolio risks. If the market can break above resistance on Monday, clear the 50- and 20-dma’s, then old highs should not be an issue.“

As shown below, (via SPDR S&P 500 (NYSE:)) did only “some” of the hard work by holding the previous resistance level, making it support, breaking out of the downtrend, but failing to clear the 50-dma. Such is an improvement from our last analysis but keeps downside risk elevated going into next week. 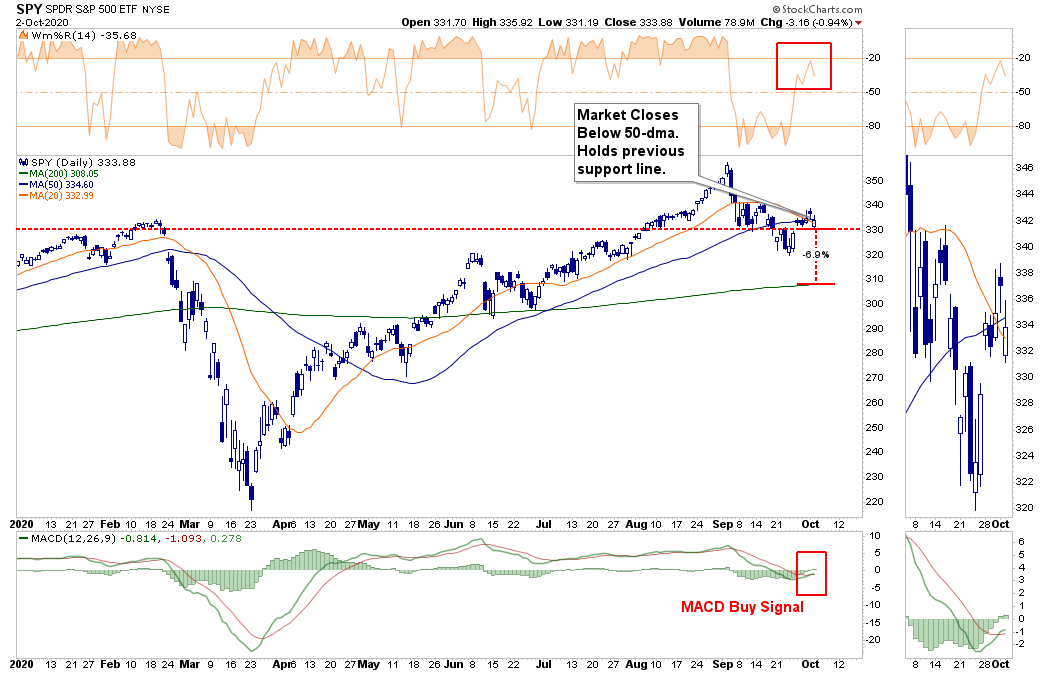 Notably, while the rally that we have witnessed from the recent lows has eaten up a fair bit of the previous oversold condition, the MACD “buy signal” was triggered on Friday.

Such suggests that we could see some additional buying next week. However, again, with the failure at the 50-dma, such means continuing to use rallies to rebalance risks accordingly.

With the election already a concern, no fiscal stimulus on the way, and rising weakness in the economic data, we added a short-market hedge to portfolios on Friday to reduce our equity exposure over the next few days as a precaution.

That is just part of our risk management process.

Does It Matter Who Wins The Election?

I got a lot of emails following our previous discussion on during Presidential election years. The basic premise of these emails was:

“Yes, but if Biden wins the election, the market will crash.”

I understand. But let’s remember that in 2016, the media claimed that if Trump won the Presidential election, the market would crash.

Yes, Biden’s proposed tax changes, green energy plans, and Government takeover of “healthcare” would indeed be bad for the markets. Such policies would weaken corporate profitability, specific sectors (energy and healthcare) would come under stress, and the surge in debt will make the Fed’s programs less effective.

However, the reality is that while Presidential candidates make lots of claims on the campaign trail, it is Wall Street that ultimately dictates the eventual outcomes. Such is why many suggest that our Congressmen wear racing jackets to see who is sponsoring them for office. 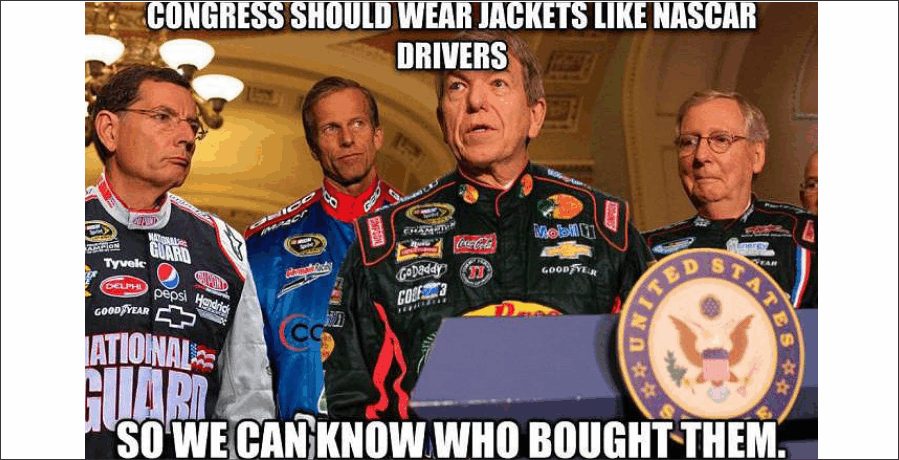 If you think for a moment that Congress comes up with, and writes, bills on their own, you are sadly mistaken. They are not that smart. Such is why whenever bills come to the floor for a vote, they always favor the group or industry whose lobby wrote and promoted the bill in the beginning.

I am not cynical. It is just how the Government works.

From a policy change perspective, assuming Joe Biden wins the November election, Trump remains in office until January 20th of 2021. That gives the market roughly 3-months to begin pricing in what the expected policy impact will be.

Time is always kind to the market. It is still the quick, unexpected, exogenous events, like shutting down the economy, that markets do not take kindly too.

His data is interesting as it shows how stock market performance leading up to an election has been an indicator of the outcome. The performance of the S&P 500 in the three months before an election has predicted 87% of elections since 1928 and 100% since 1984. When returns were positive, the incumbent party wins. If the index suffered losses in the three-month window, the incumbent loses.

For now, the market is favoring a Trump win.

However, 1-year after the election, returns were positive regardless of who won or lost. In other words, the market ultimately doesn’t care who is in office. Finally, markets only care if the economic backdrop is strong enough to support earnings growth and valuation expansion. 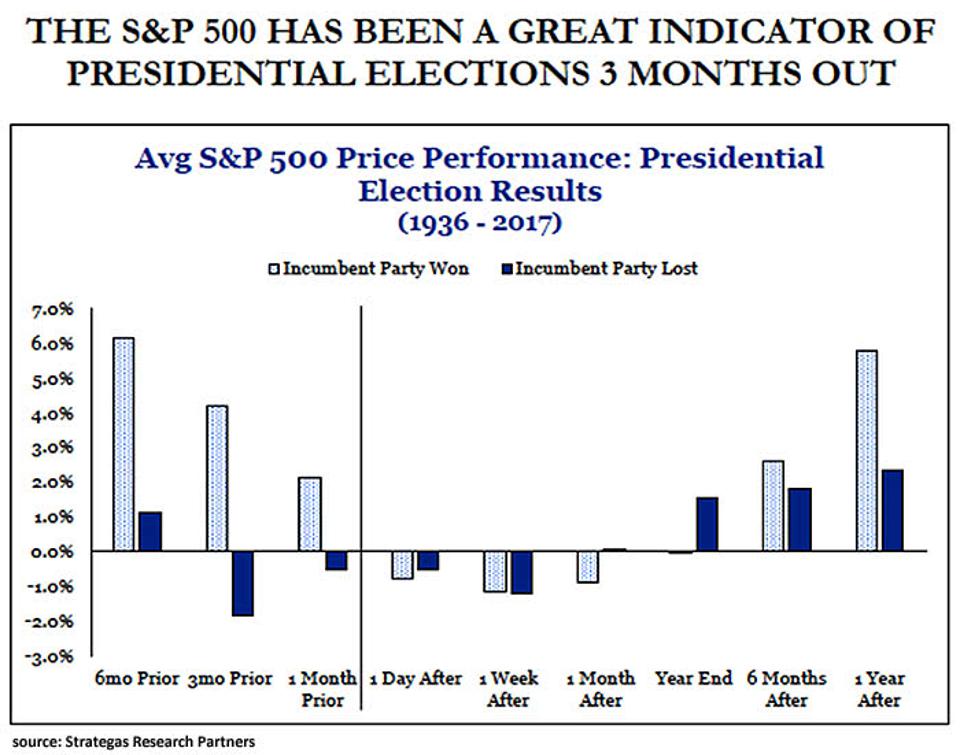 However, it is worth noting that while returns are positive regardless of who is elected, it should be of no surprise the markets performed better during a year when voters re-elect the incumbent. The market hates uncertainty. In this case, Biden presents many unknowns: the potential for increased regulations, higher taxes, and other shifts the market perceives as anti-business. 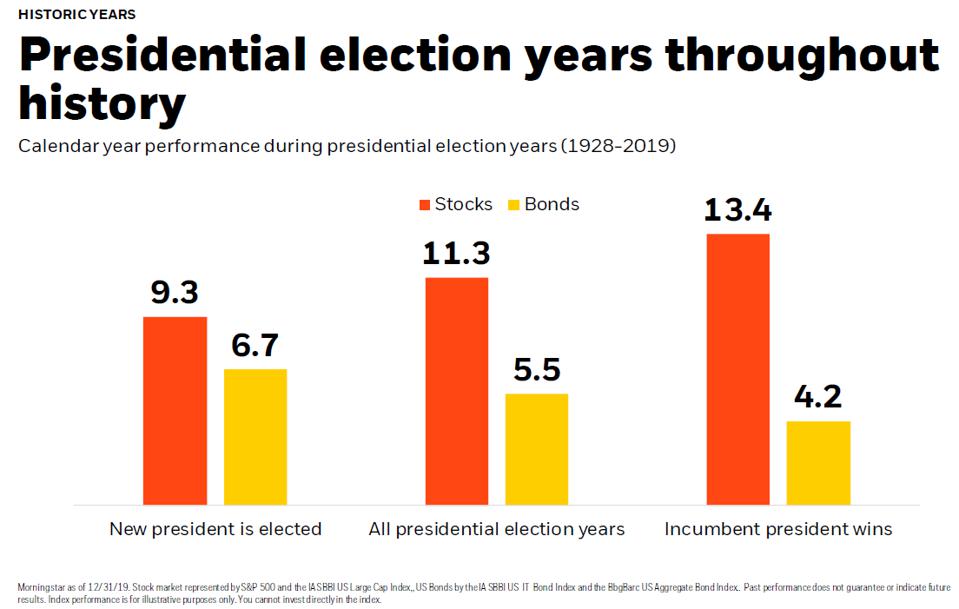 But A Biden Win Could Be Positive Too

While you may not like the title, let me explain.

The one thing holding back the market, the economy, and more importantly, the Federal Reserve, is the lack of another “fiscal stimulus” package from Washington. As my colleague Doug Kass explains:

“A Biden Presidential win (and possible Congressional sweep) could be market-friendly. Before one objects to my interpretation, let me explain.

The government (and by that I mean both the Congress and the White House) has failed our small businesses that have been gutted by Covid-19. As Jim Cramer tweeted, “they failed us,” the big ones won (Amazon (NASDAQ:), Target (NYSE:), Costco (NASDAQ:), Walmart (NYSE:), etc.) and it is growing almost too late for fiscal stimulus that could provide the necessary help to Main Street:

So, most importantly, a Biden win and Democratic sweep of Congress would hasten the imperative and passage of a massive fiscal stimulus program.”

Don’t Get All In A Bunch

Before you get all fired up and start emailing me, this is NOT about politics. (Also, remember I am on drugs.)

I am only discussing the investing outcome.

As I noted last week, the Federal Reserve is trying to plug a hole that fiscal policy was widely expected to fill by now. However, the Fed’s ability to expand on current programs is limited to the Treasury Department’s issuance of additional debt. Without another “fiscal relief” bill, there isn’t enough debt issuance to support another round of interventions by the Fed.

The Fed needs a stimulus program to expand QE, and they need it now. 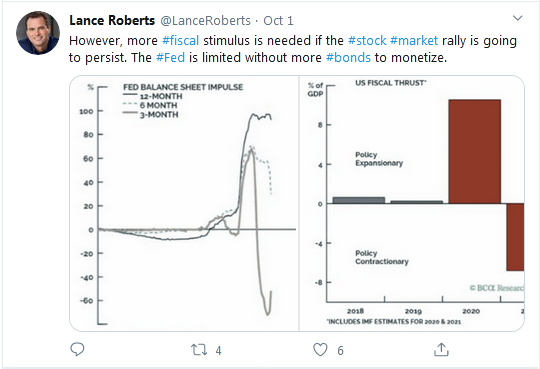 Of course, more debt is also a problem, but that is the story we discussed in our MacroView yesterday.

Projected debt in 2050 is nearly five times higher than the 50-year average of 42 percent of GDP. It will be on track to double the previous record of 106 set just after World War II. In dollar terms, debt will rise from nearly $21 trillion today to $121 trillion by 2050.” – CFRB 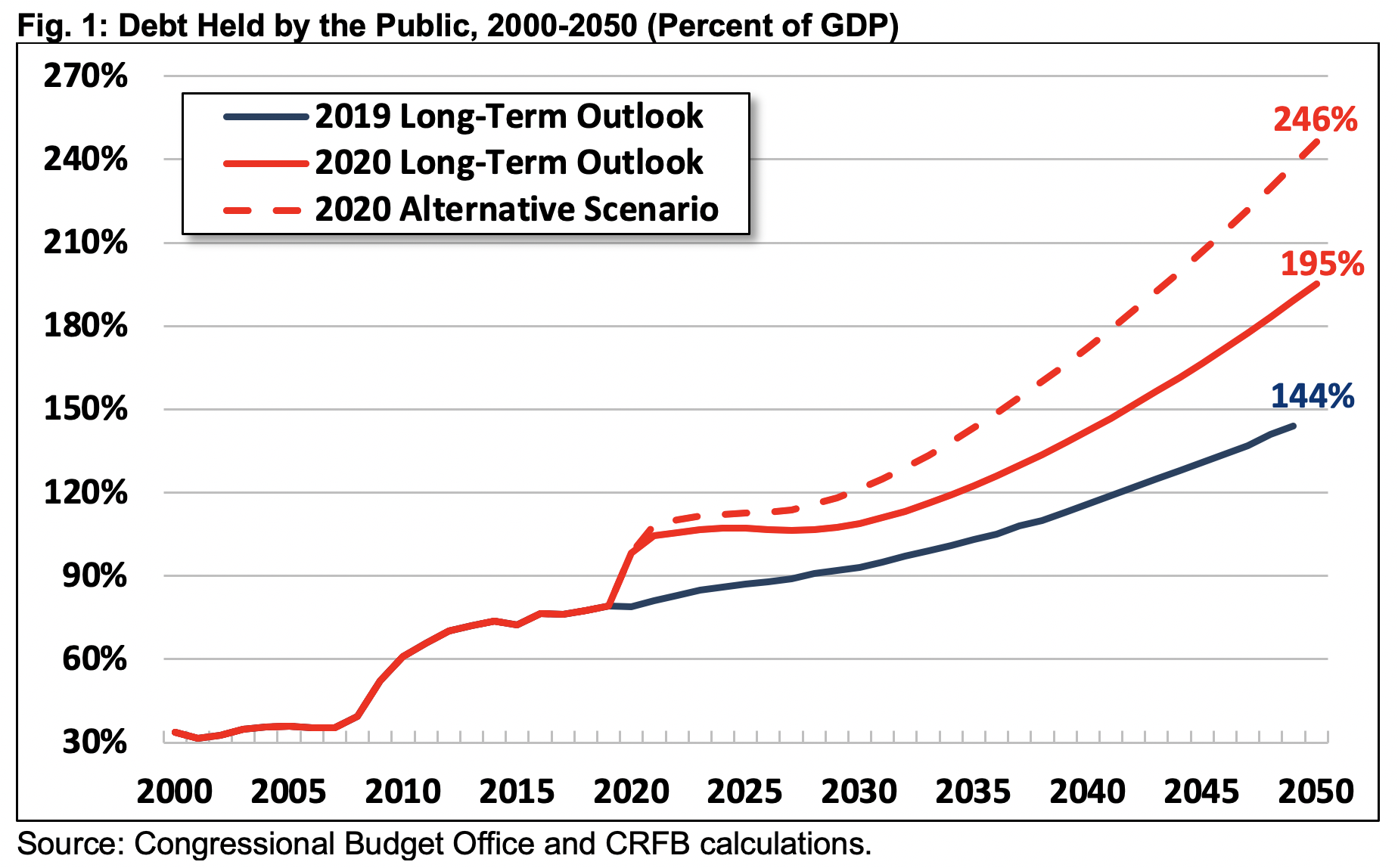 “Actual debt levels could grow significantly faster than CBO forecasts. Under our alternative scenario, debt would reach 246 percent of GDP in 2050.

Even under current law, high and rising debt represents a large fiscal gap. For example, CBO estimates policymakers would need to enact 3.6 percent of GDP in spending cuts and tax increases starting in 2025. Such actions could restore the debt to 2019 levels by 2050. That’s the equivalent of cutting all spending by one-sixth or increasing all revenue by one-fifth.” – CFRB

Neither of those things will happen.

More importantly, those are not market-friendly in the long-term.

So what should you do?

Invest based on what you know. Hedge for what don’t know.

So what do we know?

As noted last week, the short-term “selloff” was overdone. We stated:

“This past week, we continued to look for a ‘tradeable bottom,’ but did not see a reasonable risk/reward set up just yet.

Given the extent of the correction over the last three weeks, and the increase in negative sentiment, we will likely add trading positions to portfolios on Monday. We will primarily focus on the Technology, Communications, Discretionary, and Staples sectors.

Such aligns with our short-term “risk-reward” ranges. 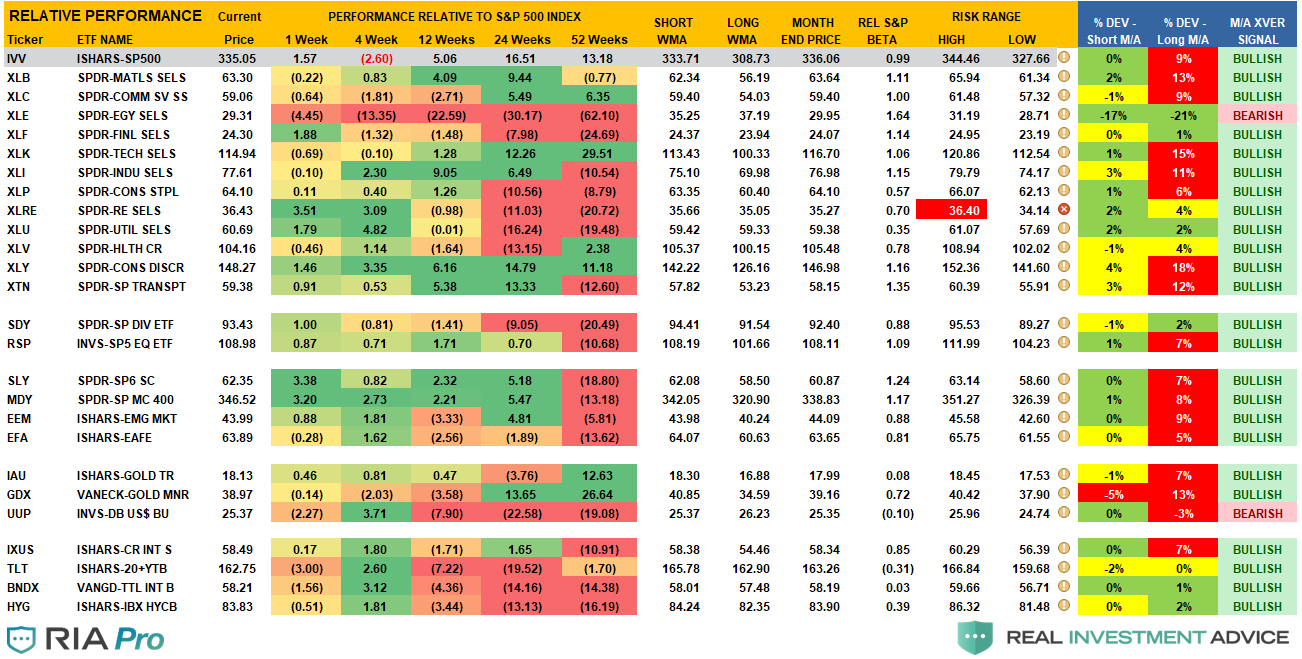 Such is what we did in both our Sector ETF Rotation and Equity Models. We did increase some of our existing holdings; we also sold positions that violated our stop levels.

Importantly, we continue to hold a healthy dose of cash. We also remain exposed to high-quality credit primarily in the areas the Federal Reserve continues to buy (i.e., Treasuries and MBS.) We also added a market-short position on Friday as a risk-hedge for the next few days.

For now, we continue to play the rally for what it is—a sellable one. Over the next few weeks, a retracement back towards previous highs is possible. However, without fiscal support well on its way, another correction is likely. On a longer-term basis, as shown in the chart below, the market remains well deviated from longer-term means. That deviation will get resolved either through price or time. We don’t know which one it will be. 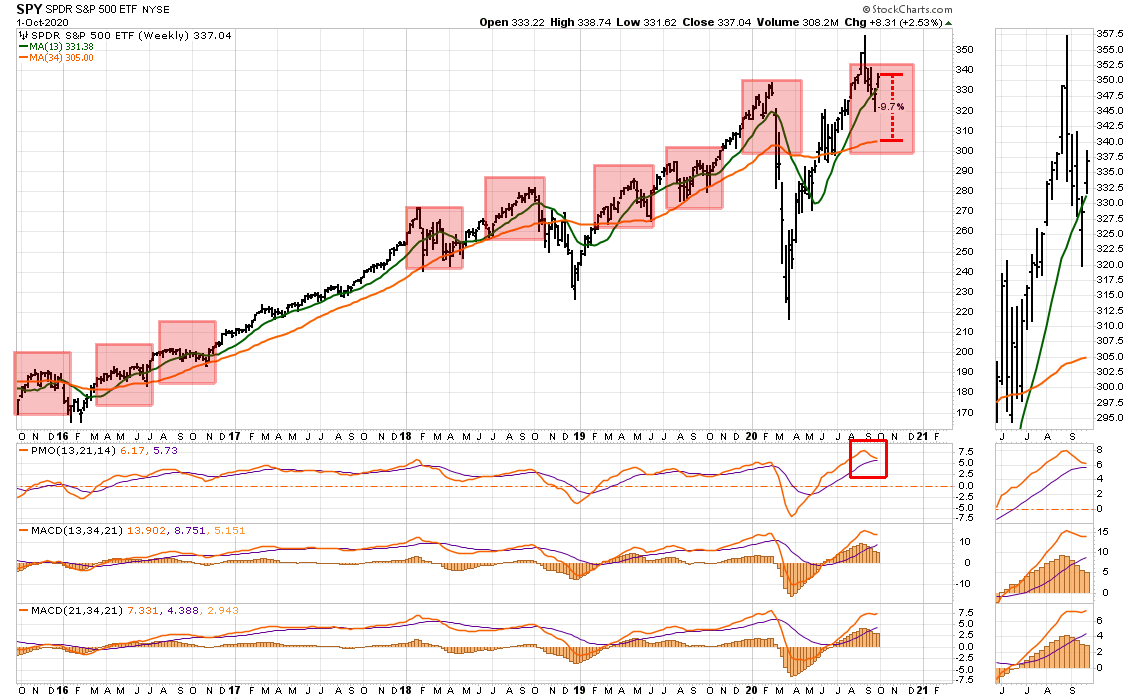 That is why we manage risk.