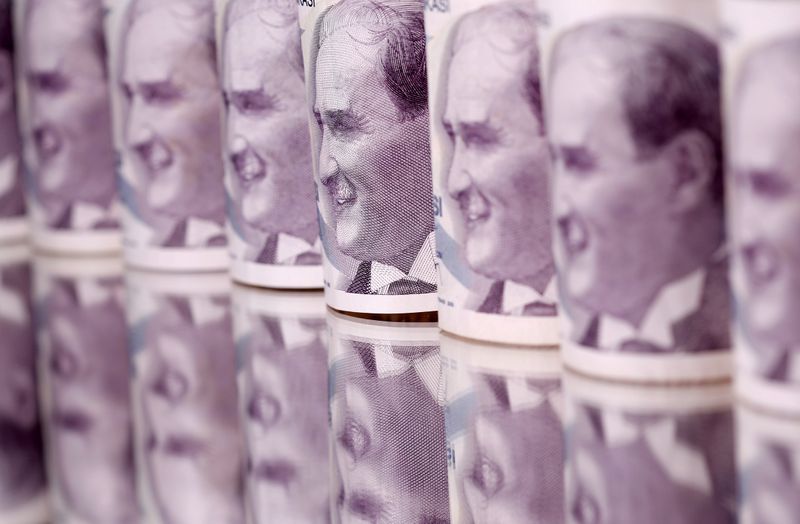 LONDON (Reuters) – The Turkish lira’s rapid decline in recent days has rung echoes of tumbles past such as the 2018 meltdown which pushed the country into an economic crisis and sent ripples through other emerging markets.

After the lira broke through the threshold of 8 to the dollar on Monday, markets are trying to read the runes of how much further policy makers will let the lira slide with the currency having lost nearly 30% since the start of the year.

“It now feels very 2018 and the questions are now how low the lira can sink and when the CBRT will be forced to go, tail between its legs, to ask (President Tayyip) Erdogan for an emergency rate hike,” said Tim Ash at BlueBay Asset Management.

Below are three charts illustrating economic and markets pressure points for Turkey, where the currency is enduring its eighth straight year of losses, having lost more than 80% of its value in the past decade.

Reserves are dwindling fast, and efforts to shore up the pressured lira have torn a sizeable hole in the central bank’s war chest. Goldman Sachs (NYSE:) estimated that policy makers intervened to the tune of $16 billion in August alone.

By traditional rules of thumb, reserves should cover the equivalent of three months of imports – Turkey is forecast to hit 2.6 by year-end.

Syria, Libya, Nagorno Karabakh – Turkey’s geopolitical tangles and affiliations have seen it at odds with one or the other major power at most times.

The latest standoff between Erdogan and French President Emmanuel Macron over the treatment of Muslims has done little to soothe frayed nerves. And with Joe Biden on track to win the race for the White House, fresh sanctions could be adding to the pressure on Turkey’s already strained markets.

“If opinion polls are proved to be incorrect and President (Donald) Trump is re-elected on Nov. 3, this would bring the severely battered lira some respite following its precipitous fall,” said RaboResearch’s global head Jan Lambregts. “However, as things stand, the lira is on the verge of a total meltdown.”