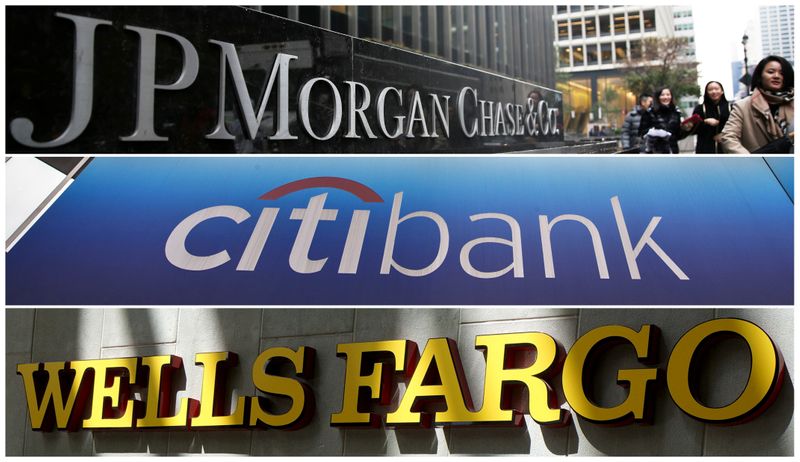 WASHINGTON (Reuters) – The four largest U.S. consumer banks posted another strong quarter this week as the rebounding economy allowed them to release more cash they had set aside for pandemic losses, while sizzling deals, equity financing and trading activity also boosted their bottom lines.

Much of that was driven by the release of a combined $6 billion of funds the banks had put aside for pandemic loan losses which have not materialized thanks to extraordinary government stimulus, aid programs and loan repayment holidays.

With the national vaccination roll-out allowing Americans to get back to work and resume socializing after 19 months of pandemic-related business closures and travel restrictions, consumer spending has boomed, the banks said.

Loan growth, a key metric closely-watched by analysts, was mixed across Wall Street however. Some lenders are still struggling to grow their loan books as consumers and businesses, flush with cash from government aid programs, continue to pay down loans.

Overall, though, executives were cautiously optimistic that the economy is on a healthy trajectory.

“The recovery from the pandemic continues to drive corporate and consumer confidence,” Citigroup CEO Jane Fraser said in a statement. “And while strong consumer balance sheets have impacted lending, we are seeing higher consumer spending across our cards products.”

Investment banking giant Morgan Stanley (NYSE:) Inc crushed estimates on Thursday, reporting a $3.58 billion profit, up nearly 38% on the year-ago-quarter. That was thanks in large part to a record $1.27 billion in revenues from advising from advising on deals.

“The investment bank, itself, and M&A, is on fire,” Gorman said in an interview with CNBC after the results. “We’ve got global GDP growth, enormous fiscal stimulus, record low interest rates. People want to transact.”

The highlight for JPMorgan’s third quarter was also its Corporate & Investment Bank division, where advisory fees almost tripled due to strong M&A and equity underwriting. All told, that division reported a 6% rise in net revenue to $12.4 billion.

At Bank of America, revenue from its equities division rose 33% year-on-year, driven by growth in client financing activities and strong trading performance, while Citigroup said revenues for its equity markets business had jumped 40%.

JPMorgan said on Wednesday that, on average, loans were up 5% across the bank compared with last year, while Bank of America, Citi and Wells Fargo (NYSE:) reported declines in loan growth year-on-year.