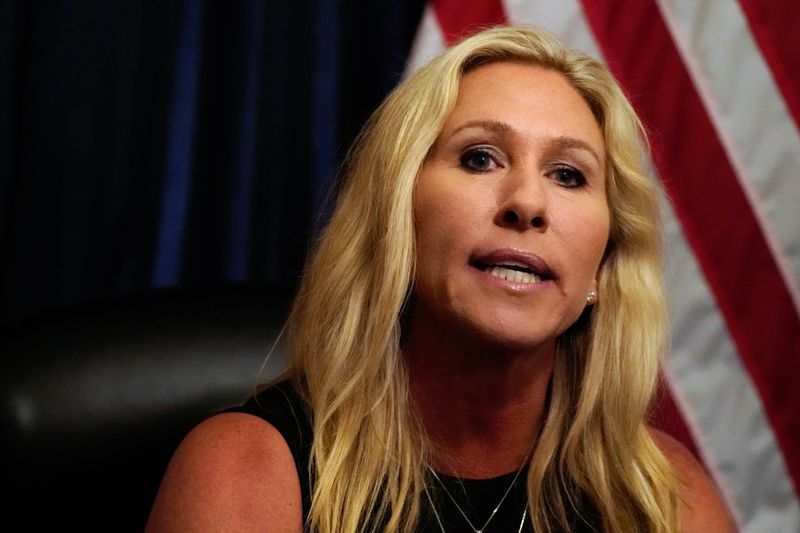 © Reuters. FILE PHOTO: U.S. Rep. Marjorie Taylor Greene (R-GA) speaks to reporters about being temporarily suspended from Twitter for tweets which violated the social media’s misinformation policy on COVID-19 from her office in Longworth House Office Building in Was

(Reuters) – U.S. Representative Marjorie Taylor Greene, an ally of Donald Trump, bought as much as $50,000 worth of shares in the special purpose acquisition company (SPAC) that has agreed to merge with the former President’s new social media venture.

Greene bought shares worth between $15,001 and $50,000 on Oct. 22, the day they rose in value by as much as 1,650% from what they were worth before the deal, as amateur traders and Trump supporters snapped them up, according to a regulatory filing published on Wednesday.

The shares of the SPAC, Digital World Acquisition Corp, have given up most of their gains since Greene invested on Friday. Greene’s representatives did not respond to a request for comment on how her investment has fared so far.

There is no suggestion that Greene broke any rules with her investment. Members of Congress are allowed to trade shares as long as they are not using non-public information.

A firebrand Republican, Greene has often been criticized for provocative comments and Twitter Inc (NYSE:) has on occasions blocked her social media account. In June, the 47-year-old congresswoman from Georgia publicly apologized for comparing COVID-19 mask requirements and vaccinations to the Nazi Holocaust that killed 6 million Jews.

Digital World shares were up 73% on Thursday afternoon since the deal announcement, giving Trump’s company, Trump Media & Technology Group, a valuation of about $6.3 billion. The company’s social media app has not yet launched even on a trial basis, yet it has big ambitions given Trump’s previous social media following.

He had 89 million followers on Twitter, 33 million on Facebook (NASDAQ:) and 24.5 million on Instagram, before he was banned for encouraging his supporters to participate in the U.S. Capital attack on Jan. 6.

Trump and other Trump Media & Technology Group shareholders will initially own 69% of the combined company after the merger with the SPAC, a regulatory filing showed this week. Their ownership could reach 77% if the company’s stock meets certain price milestones.