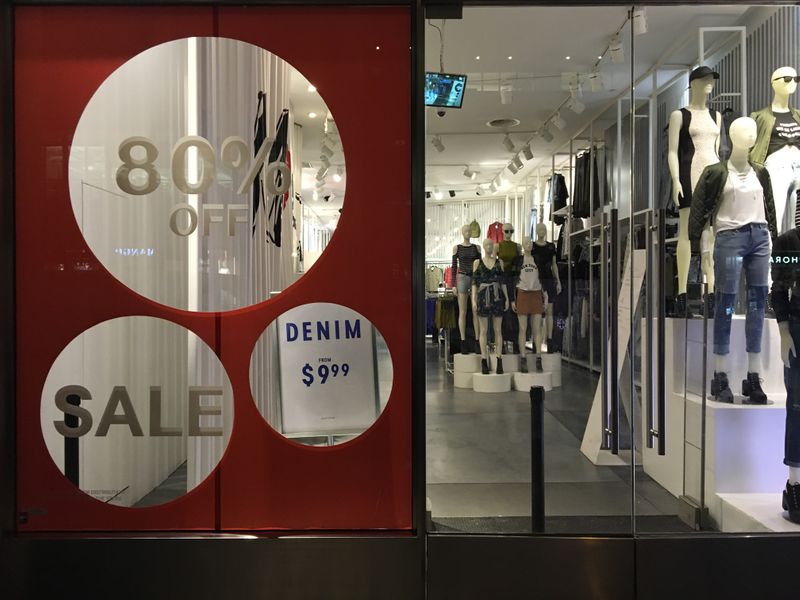 © Reuters. An H&M store has sale signs in the window in New York City

WASHINGTON (Reuters) – U.S. consumer spending rose more than expected in September, but decreasing benefits for millions of unemployed Americans, cooling temperatures and a resurgence in COVID-19 cases across the nation could crimp spending in the fourth quarter.

The report from the Commerce Department on Friday also showed inflation remaining muted last month, which could allow the Federal Reserve to keep interest rates near zero for a while to aid the recovery from the COVID-19 recession as fiscal stimulus runs out. More than $3 trillion in government pandemic relief, which included a weekly unemployment benefits subsidy, spurred record economic growth in the third quarter.

“This recovery could be at risk without additional stimulus, as households with unemployed workers find themselves stretched financially heading into the holiday shopping season,” said Gus Faucher, chief economist at PNC Financial (NYSE:) in Pittsburgh, Pennsylvania. “Personal income and consumer spending could also take a big hit if the pandemic continues to spread and states re-impose restrictions on economic activity in response.”

Consumers boosted purchases of goods like new motor vehicles, clothing and footwear. They also lifted spending on healthcare, membership clubs, as well as outlays at sports centers, parks, theaters and museums. Still, consumer spending remains below its level at the start of the year, held back by outlays on services like air travel and hotel accommodation.

Spending has shifted towards goods, indicating the services-driven economy’s recovery from the recession, which started in February, would be slower than previous downturns.

Consumer sentiment was little changed at the end of October from earlier in the month amid fears over rising COVID-19 cases, other data showed on Friday.

The spending data was included in Thursday’s advance gross domestic product report for the third quarter, which showed the economy rebounding at a historic 33.1% annualized rate. That followed a 31.4% pace of contraction the second quarter, the deepest since the government started keeping records in 1947.

A jaw-dropping 40.7% pace of growth in consumer spending accounted for 76.3% to the bounce back in GDP. The economy remains 3.5% below its level at the end of 2019 and analysts expect the gap to be closed in the fourth quarter of 2021.

Much of the spending last quarter was driven by billions of dollars in government transfers, including a $600 weekly unemployment subsidy and a one-off $1,200 check to households.

Unemployment insurance payments tumbled 42.2% to $364.8 billion last month. The government attributed the plunge to the expiration of the $600 weekly unemployment supplement in July. The decrease was partially offset by a 34.6% increase in other government transfers, including an additional weekly $300 unemployment benefit, which replaced the $600 subsidy.

Funding for the $300 weekly subsidy mostly ran out in September and there is no deal in sight for another rescue package. The smaller supplement, together with gains in wages and rental income boosted personal income, which rebounded 0.9% in September after falling 2.5% in August.

“There is clear evidence some people are being left behind,” said Chris Low, chief economist at FHN Financial in New York. “Congress has dropped the ball and income will fall bigly in the next income and consumption report. Couple that with a COVID resurgence and the fourth quarter will be challenging.”

Americans are also dipping into savings to fund spending. The saving rate slipped to a still high 14.3% from 14.8% in August. It peaked at record 33.6% in April.

The personal consumption expenditures (PCE) price index excluding the volatile food and energy components rose 0.2% after climbing 0.3% in August. In the 12 months through September, the so-called core PCE price index increased 1.5% after advancing 1.4% in August.

The core PCE index is the preferred inflation measure for the Fed’s 2% target, a flexible average.

The tame inflation environment was underscored by a third report from the Labor Department on Friday showing the Employment Cost Index, the broadest measure of labor costs, rose 0.5% in the third quarter, matching the second quarter’s gain.

That lowered the year-on-year rate of increase to 2.4%, the smallest rise since the second quarter of 2017, from 2.7% in the April-June period. The ECI is widely viewed by policymakers and economists as one of the better measures of labor market slack and a predictor of core inflation as it adjusts for composition and job quality changes.

“The easing trend in compensation costs suggest that inflation should not rise to a threatening pace anytime soon,” said Sarah House, a senior economist at Wells Fargo (NYSE:) Securities in Charlotte, North Carolina.