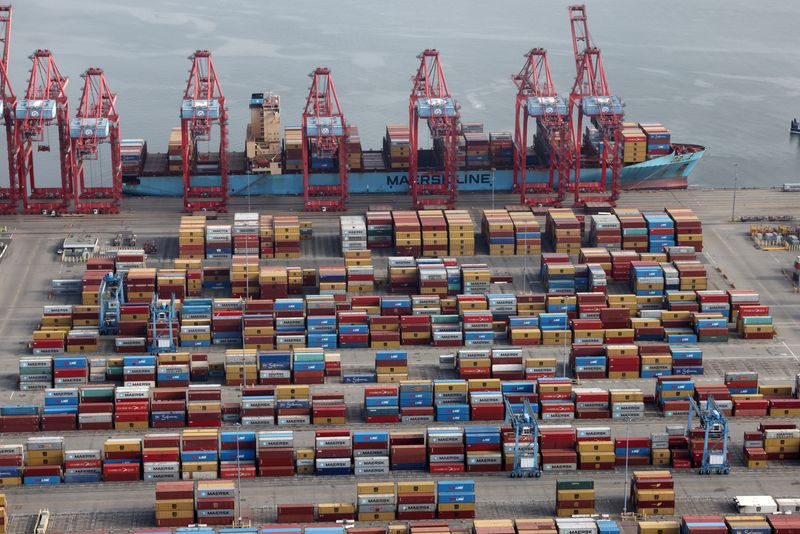 © Reuters. FILE PHOTO: Shipping containers are unloaded from a ship at a container terminal at the Port of Long Beach-Port of Los Angeles complex, amid the coronavirus disease (COVID-19) pandemic, in Los Angeles, California, U.S., April 7, 2021. REUTERS/Lucy Nichols

WASHINGTON (Reuters) – The U.S. current account deficit narrowed sharply in the second quarter amid a surge in goods exports, data showed on Thursday.

The Commerce Department said that the current account deficit, which measures the flow of goods, services and investments into and out of the country, contracted 11.1% to $251.1 billion last quarter.

The current account gap represented 4.0% of gross domestic product, down from 4.6% in the January-March quarter. The deficit peaked at 6.3% of GDP in the fourth quarter of 2005.

The United States is now a net exporter of and fuel. While the deficit remains wide, it has no impact on the dollar given its status as the reserve currency.

Exports of goods jumped $52.0 billion to $539.9 billion. They were boosted by shipments of industrial supplies and materials, mostly petroleum and products.

Exports were one of the few bright spots in the economy last quarter, helping to limit the drag on gross domestic product from a sharp slowdown in the pace of inventory accumulation. GDP contracted at a 0.6% annualized pace in the second quarter after declining at a 1.6% rate in the January-March quarter.

Imports of goods increased $20.8 billion to $850.4 billion, reflecting petroleum products. Import growth has slowed as businesses assess their inventory needs amid cooling domestic demand against the backdrop of aggressive interest rate increases from the Federal Reserve.

(This story refiles to delete extraneous word in headline, no change to content of story)