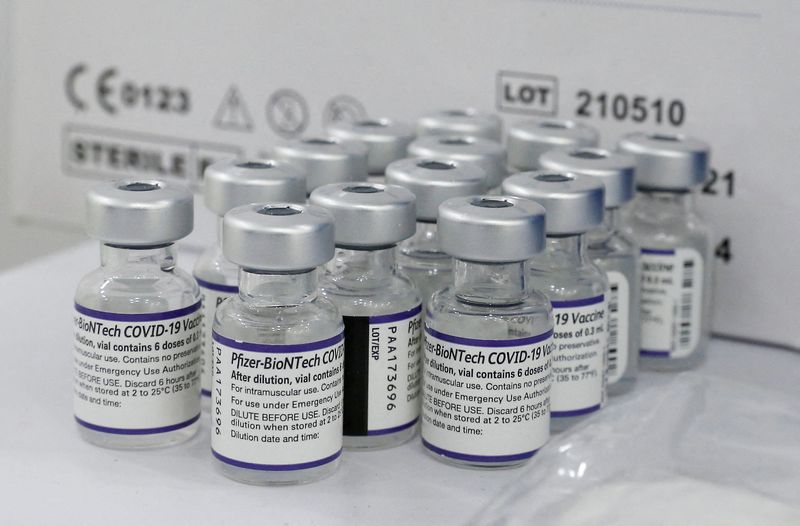 © Reuters. FILE PHOTO: Vials containing the Pfizer/BioNtech vaccine against the coronavirus disease (COVID-19) are displayed before being used at a mobile vaccine clinic, in Valparaiso, Chile, January 3, 2022. REUTERS/Rodrigo Garrido

NEW YORK (Reuters) – The United States is significantly cutting back the number of Pfizer/BioNTech COVID-19 vaccine doses it will buy for donation to poorer nations this year, Pfizer (NYSE:) said on Thursday, citing diminished demand for the shots in those countries.

Pfizer said it agreed to reduce the number of doses it will deliver by year end to 600 million, down from the billion-dose commitment the U.S. government made a year ago.

The United States will have an option to buy up to an additional 400 million shots for the program after this year.

The drugmaker said it would have sufficient supply to deliver the full billion doses under the U.S. commitment, but “we are seeing reduced demand in some low- and lower-middle-income countries due to barriers in administration and vaccine hesitancy.”

The U.S. Department of Health and Human Services did not immediately respond to a request for comment. The revised terms of the contract were previously reported by Bloomberg.

Pfizer said it had already delivered 400 million vaccine doses in 79 countries under the U.S. government contract.

The vaccine doses were donated through the COVAX program, run by the World Health Organization and GAVI global vaccine alliance, which was intended to deliver COVID-19 shots to the world’s poorer countries.

The program initially struggled to acquire enough vaccine to fulfill its mission, but improved output from manufacturers has led to a glut of doses in 2022.

COVAX has been negotiating since June with vaccine manufacturers to cut or slow deliveries of 400 million to 600 million vaccine doses from its own contracts.