This week’s delayed fourth-quarter report on U.S. gross domestic product () remains on track to confirm that U.S. economic growth continued to slow. The Bureau of Economic Analysis is expected to report (on Thursday, Feb. 28) that the expansion moderated for a second straight quarter, based on a set of nowcasts. The release will also reveal that recession risk remained low for the U.S. at the close of 2018, although preliminary data for 2019 suggests that growth will continue to decelerate.

U.S. GDP for Q4 is on track to rise 2.4% (seasonally adjusted annual rate), based on the median estimate via several nowcasts compiled by The Capital Spectator. If correct, the expansion in last year’s October-through-December period will reflect a downshift from Q3’s 3.4% and Q2’s 4.2%. 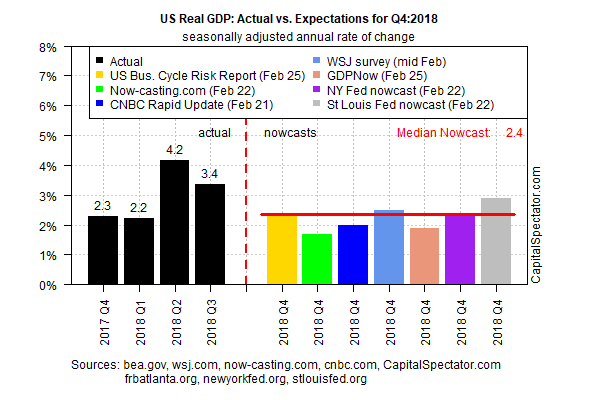 US Real GDP Actual Vs Expectations For Q4 2018

The Chicago Fed National Activity Index (CFNAI) for January suggests that the slowdown in U.S. economic activity will continue in early 2019. CFNAI’s three month-average fell to 0.0, which indicates that growth was running at the historical trend last month. Note, however, that the latest update also shows that the pace of the expansion eased for a fifth straight month and dropped to a 16-month low. 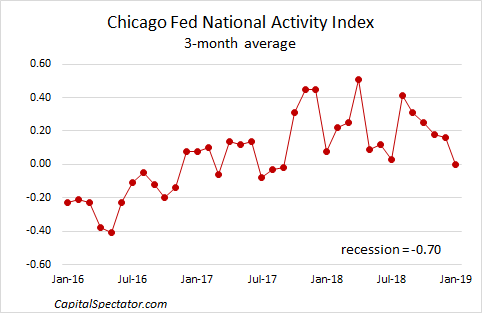 The Chicago Fed’s hard-data benchmark suggests that output will continue to ease in the new year. Looking at GDP projections through a year-over-year lens supports that analysis, although the downshift is expected to be gradual. Using a set a combination forecasts indicates that the point forecast for this year’s annual Q1 increase will more or less hold steady relative to Q4 before easing later in the year. 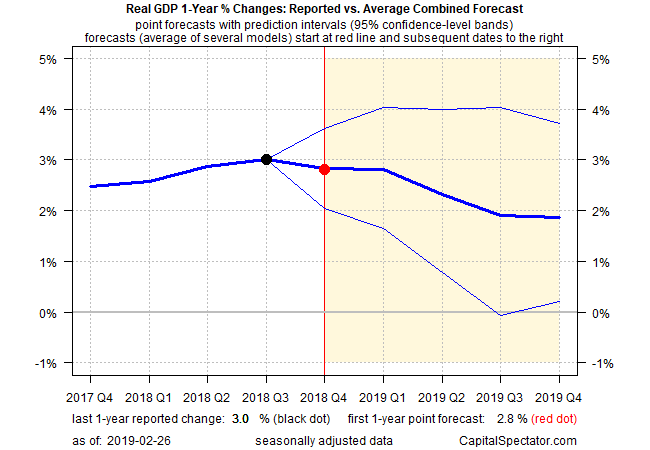 Survey data also suggests that the U.S. slowdown will stabilize in early 2019. The preliminary estimate of the U.S. Composite Output Index for February ticked up to 55.8, an eight-month high (and well above the neutral 50 mark that separates expansion from contraction). This GDP proxy is “indicative of an underlying economic growth rate of around 2.5% annualized,” says Tim Moore, associate director at IHS Markit. If accurate, this estimate points to a relatively stable pace of growth in the first quarter relative to the expected gain for Q4.

Until incoming data suggests otherwise, the relatively upbeat outlook via the U.S. Composite Output Index should be interpreted as the best-case scenario. In other words, cautious optimism is still reasonable for expecting that the U.S. economy will continue to expand, albeit at a softer rate compared with last year.

“The probability of strong expansion [for the U.S.] has fallen sharply in recent months,” writes Gavyn Davies, chairman of Fulcrum Asset Management, in the FT this week. Citing the firm’s nowcasting model, he advises that recession risk is low for the U.S. – analysis that finds support in The Capital Spectator’s recent profile of the business cycle. “There is, therefore, a high probability that Goldilocks [modest growth] remains intact,” Davies concludes. 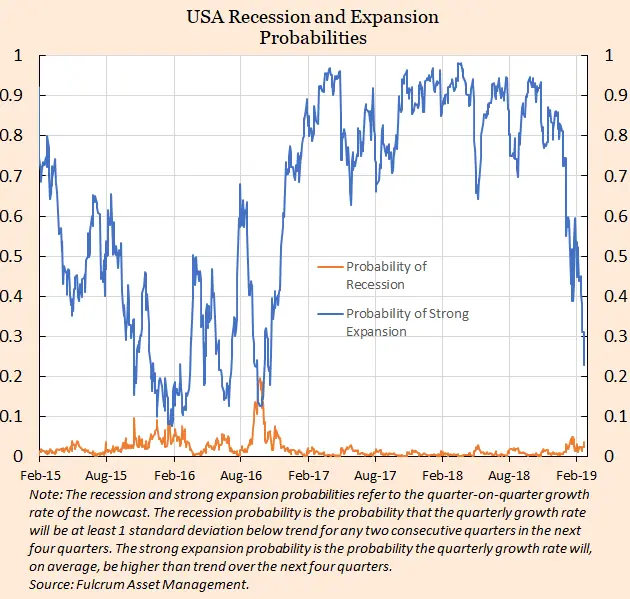 But there’s always something to worry about. On the short list: a slowdown in the global economy, which will likely create headwinds for the U.S. as the year unfolds. “Growth in the advanced economies slowed from 2.3% in November to 0.8% now — too far below trend for comfort,” Davies reports. “Furthermore, there is no sign yet that the downward momentum is beginning to improve.”