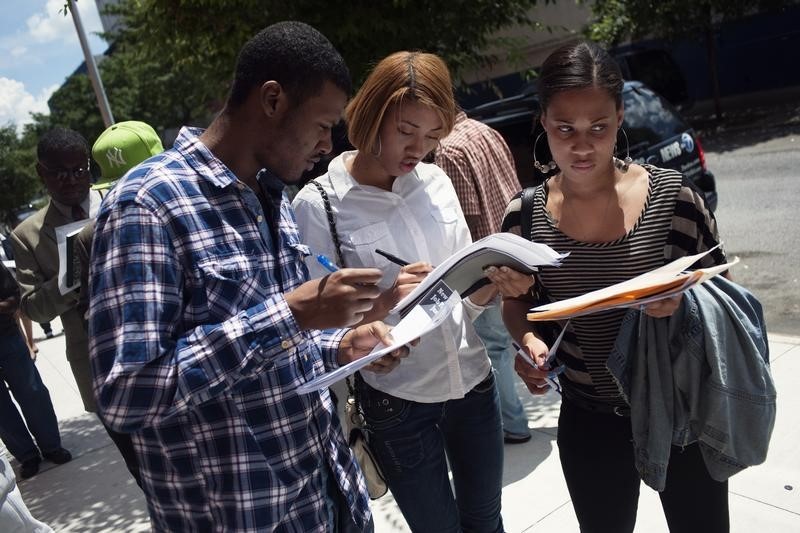 Investing.com — The U.S. labor market’s recovery weakened in September, with the economy adding only 661,000 new through the middle of the month, less than half of what it created in the month through mid-August.

Kit Juckes, a macro strategist for Societe Generale (OTC:), said via Twtter that the data “suggest (the) jobs recovery is ongoing but slowing a bit.”

The unemployment rate fell more than expected to 7.9% of the workforce, from 8.4% in August. Analysts had expected a rate of 8.2% ahead of time. The broader ‘U6’ measure of underemployment also fell, but stayed at the historically high level of 12.8% of the labor force. Participation in the workforce fell again, to 61.4% from 61.7% in August.

The shortfall in job gains was accounted for entirely by government employment, which fell by 216,000 in the month. Private payrolls expanded by 877,000, even more than expected after ADP flagged a gain of just under 750,000 earlier in the week.

Financial markets were nonetheless disappointed by the news, which followed only hours after President Donald Trump’s positive test for the Covid-19 virus for once upstaged what is normally the world’s most important economic data release of the month. By 8:55 AM ET (1455 GMT), were down 1.6% after being down only 1.2% immediately before the release, while were down 1.7%.

The last two months’ data have been distorted to a degree by hiring for the 2020 census. On a slightly longer view, it now appears that the economy has clawed back just over half of the jobs that it lost in first wave of the pandemic in spring.

However, the pace of improvement has slowed markedly from nearly 4.8 million new jobs in June to less than one-fifth of that in September. In addition, there are increasing signs of companies finally resorting to layoffs as the level of government support for the economy ebbs in the absence of a new fiscal support package. Walt Disney  (NYSE:), United Airlines (NASDAQ:) and American Airlines Group (NASDAQ:) between them confirmed some 60,000 job cuts this week alone, while insurer Allstate  (NYSE:) and Goldman Sachs (NYSE:) also announced they would shed positions.