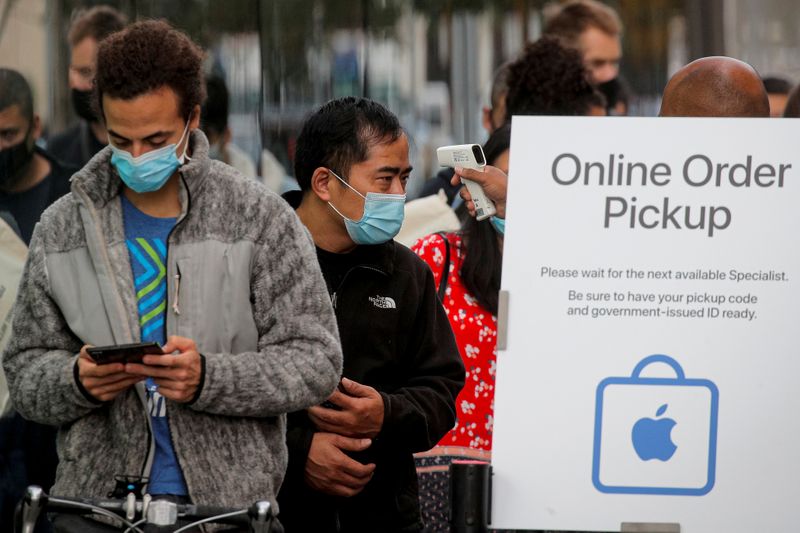 © Reuters. FILE PHOTO: A customer has his temperature taken while in line outside an Apple Store to pick up Apple’s new 5G iPhone 12 in Brooklyn, New York

WASHINGTON (Reuters) – The U.S. economy grew at a historic pace in the third quarter as the government injected more than $3 trillion worth of pandemic relief which fueled consumer spending, but the deep scars from the COVID-19 recession could take a year or more to heal.

The 33.1% annualized growth rate reported by the Commerce Department on Thursday, the last major economic scorecard before next Tuesday’s presidential election, did not ease the human tragedy inflicted by the coronavirus pandemic, with tens of millions of Americans still unemployed and more than 222,000 dead.

The economy remains 3.5% below its level at the end of 2019 and incomes plunged in the third quarter. Nevertheless, with five days remaining to Election Day President Donald Trump, trailing in most national opinion polls, cheered the report.

“Biggest and Best in the History of our Country, and not even close,” Trump wrote on Twitter. “So glad this great GDP number came out before November 3rd.”

“We are in a deep hole and President Trump’s failure to act has meant that third-quarter growth wasn’t nearly enough to get us out of (it),” said Biden. “The recovery that is happening is helping those at the top, but leaving tens of millions of working families and small businesses behind.”

According to Christopher Way, an associate professor of government at Cornell University, the report “will have absolutely zero effect on the election and it is economic performance in the first half of an election year that matters.”

The rebound in gross domestic product followed a 31.4% rate of contraction in the second quarter, the deepest since the government started keeping records in 1947. On a year-on-year basis GDP jumped 7.4% last quarter after sinking 9.0% in the April-June period. The rebound reversed about two-thirds of the 10.1% drop in GDP in the first half. By comparison, the economy contracted 4% peak to trough during the 2007-09 Great Recession.

Economists polled by Reuters had forecast GDP expanding at a 31% rate in the July-September quarter. The economy plunged into recession in February.

The government’s rescue package provided a lifeline for many businesses and the unemployed, juicing up consumer spending, which on its own contributed 76.3% to the surge in GDP.

But government funding has been depleted with no deal in sight for another round of relief. New COVID-19 cases are spiraling across the country, forcing restrictions on businesses like restaurants and bars.

“We still don’t have the level of GDP surpassing the pre-COVID level until fourth-quarter 2021 and closing the output gap will take even more time,” said Kevin Cummins (NYSE:), chief U.S. economist at NatWest Markets in Stamford, Connecticut.

Foreshadowing a slowdown in consumer spending, personal income tumbled at a $540.6 billion rate in the third quarter after surging at a $1.45 trillion pace in the prior period. The drop was attributed to a decline in government transfers related to the pandemic relief programs.

Though savings remain high, the pace at which Americans are stashing away money is moderating. That, together with persistent layoffs and slowing employment growth could restrain consumer spending in the coming months.

Stocks on Wall Street were trading higher. The dollar rose against a basket of currencies. U.S. Treasury prices fell.

Though claims have dropped from a record 6.867 million in March, they remain above their 665,000 peak seen during the 2007-09 Great Recession. About 22.7 million Americans were receiving unemployment benefits in early October, though many have exhausted their eligibility for state aid.

Just over half of the 22.2 million jobs lost during the pandemic have been recouped.

Consumer spending, which accounts for more than two-thirds of the U.S. economy, rebounded at a historic rate of 40.7% in the third quarter, driven by purchases of goods like motor vehicles, clothing and footwear. Americans also boosted spending on recreation, healthcare and dining out. But spending on services remained below its fourth quarter level.

Spending was boosted by billions of dollars in government transfers, including a $600 weekly unemployment subsidy and a one-off $1,200 check to households. Growth estimates for the fourth quarter are below a 5% rate.

“Without further stimulus, the winter may indeed be very painful,” said Jeff Madrick, senior fellow at The Century Foundation in New York.

The shift toward goods spending pulled in imports, resulting in a widening of the trade deficit. Some of the imports, however, ended up in warehouses. The accumulation of inventory offset the trade hit to GDP growth.

There was also a turnaround in business investment after the second-quarter drubbing, but the bounce could be temporary as demand for goods that do not complement life-style changes brought by COVID-19 remains weak. Boeing Co (N:) reported its fourth straight quarterly loss on Wednesday.

Record low interest rates boosted housing. Government spending fell, pressured by cuts at state and local governments, whose finances have been squeezed by the coronavirus.