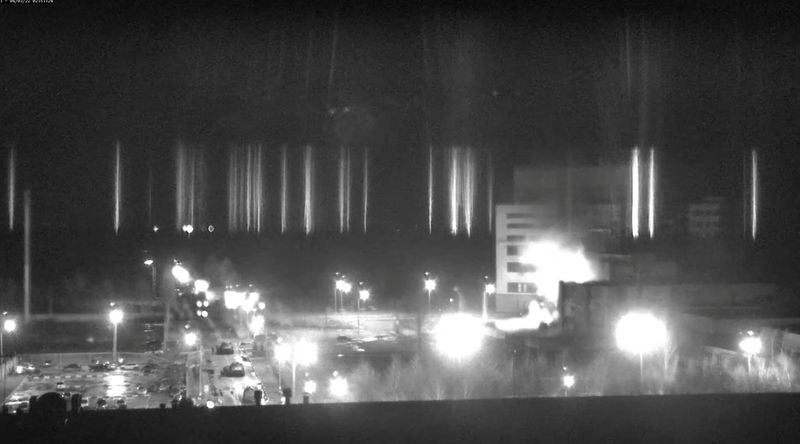 WASHINGTON (Reuters) -The U.S. Embassy in Ukraine said that attacking a nuclear power plant is a war crime, after Russia on Friday seized a Ukrainian nuclear facility that is the biggest in Europe.

The statement on the embassy’s Twitter (NYSE:) account went further than any U.S. characterization of Russia’s actions in Ukraine since it launched its invasion on Feb. 24.

“It is a war crime to attack a nuclear power plant. Putin’s shelling of Europe’s largest nuclear plant takes his reign of terror one step further,” U.S. Embassy Kyiv said in its post.

Russia’s defense ministry blamed a fire at the plant on a “monstrous attack” by Ukrainian saboteurs and said its forces were in control.

The State Department sent a message to all U.S. embassies in Europe telling them not to retweet the Kyiv Embassy’s tweet calling the attack a war crime, according to CNN, which said it reviewed the message.

The State Department did not respond to a request for comment from Reuters asking if the Kyiv Embassy’s tweet reflects the position of the entire U.S. government.

Rights groups have alleged violations of international war crimes law in Ukraine, including the targeting of civilians, as well as indiscriminate attacks on schools and hospitals.

Pentagon spokesman John Kirby (NYSE:) on Friday declined to answer the question, saying he would leave that determination to the International Criminal Court.

“This just underscores how reckless the Russian invasion has been and how indiscriminate their targeting seems to be. It just raises the level of potential catastrophe to a level that nobody wants to see,” Kirby said in an interview with CNN.

“It is certainly not the behavior of a responsible nuclear power.”

The ICC, the world’s top war crimes prosecutor, on the request of 39 member states, is investigating reports of cluster bombs and artillery strikes on Ukrainian cities..

Karim Khan, a British lawyer named as the chief prosecutor of the ICC last year, said the crisis in Ukraine is a chance to demonstrate that those committing war crimes would be held to account.