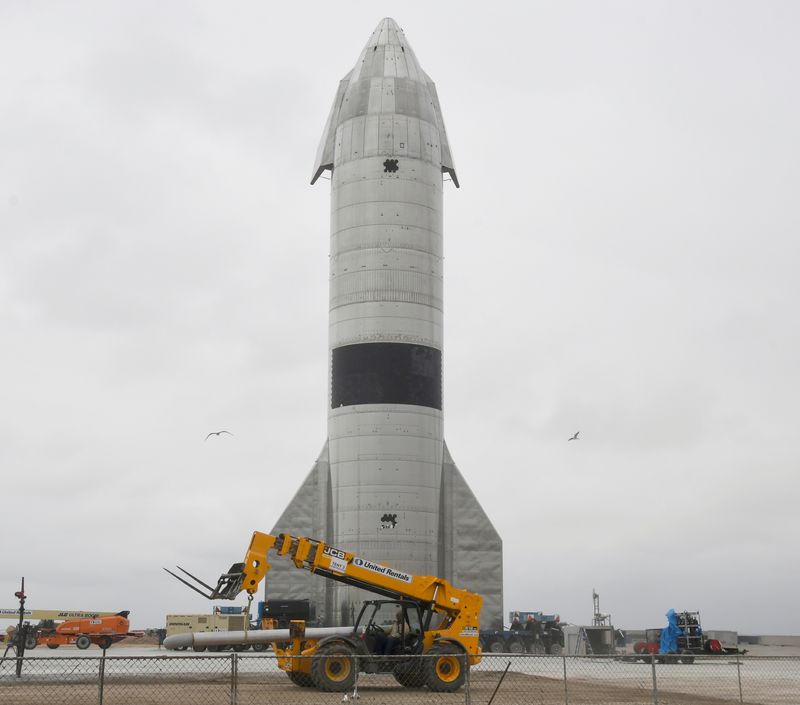 © Reuters. FILE PHOTO: A SpaceX SN15 starship prototype is seen as it sits on a transporter after Wednesday’s successful launch and first landing from the company’s starship facility, in Boca Chica, Texas, U.S. May 6, 2021. REUTERS/Gene Blevins

WASHINGTON (Reuters) -The Federal Aviation Administration (FAA) said on Friday it was again extending its target date to complete an environmental review of the proposed SpaceX Starship spacecraft and Super Heavy rocket program in Boca Chica, Texas, to April 29.

The FAA’s previous target date was March 28. The FAA noted that completing the environmental review does not guarantee a vehicle operator license will be issued, which must also meet FAA safety, risk and financial responsibility requirements.

The FAA said it “is currently reviewing the Final (Programmatic Environmental Assessment) and completing consultation and coordination with agencies at the local, state, and federal level.”

SpaceX founder Elon Musk said last month he was “highly confident” his new SpaceX Starship, designed for voyages to the moon and Mars, will reach Earth orbit for the first time this year.

The FAA is deciding whether the planned build-out in Texas poses a significant environmental impact to the area – including an adjacent wildlife reserve – and must therefore undergo a far more extensive study before expanded operations at SpaceX’s rocket production facility and spaceport in Boca Chica can be licensed.

Even in a “worst-case” scenario, in which a full environmental impact statement were required or legal wrangling over the issue threatened to drag on, Musk said SpaceX has a fall-back plan.

The company would shift its entire Starship program to the Kennedy Space Center in Cape Canaveral, Florida, where SpaceX already has received the environmental approval it needs, Musk said.

Such a move would cause a setback of six to eight months, he added. In any case, SpaceX is still shooting for a 2023 launch of what it calls the world’s first private lunar mission, flying aboard a Starship to loop around the moon and return to Earth.