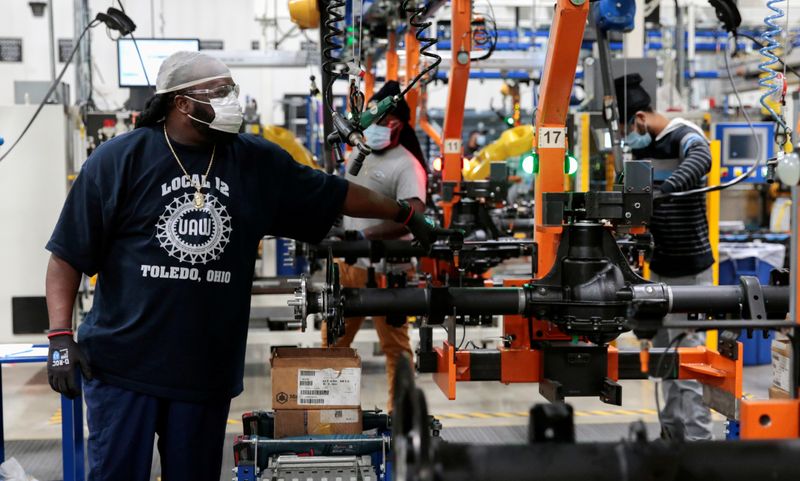 WASHINGTON (Reuters) – New orders for U.S.-made goods increased solidly in September, but further gains could be limited amid an anticipated slowdown in consumer spending as government money for businesses and workers impacted by the COVID-19 pandemic runs out.

The Commerce Department said on Tuesday that factory orders rose 1.1% after climbing 0.6% in August. Orders were boosted by increased demand for primary metals, computers and electronic products as well as motor vehicles and fabricated metal products. But orders for machinery, furniture and electrical equipment, appliances and components fell.

Economists polled by Reuters had forecast factory orders would rise 1.0% in September.

Manufacturing, which accounts for 11.3% of U.S. economic activity, has been boosted by a shift in spending from services toward goods as Americans set up home offices and remote classrooms and avoid public transportation because of the coronavirus.

A survey on Monday from the Institute for Supply Management on Monday showed its measure of national factory activity raced to its highest level in nearly two years in October, with new orders surging to their highest level in almost 17 years.

But the strong manufacturing sentiment likely overstates the health of the sector. A report from the Federal Reserve last month showed production at factories dropped 0.3% in September and remained 6.4% below its pre-pandemic level.

More than $3 trillion in government pandemic relief juiced economic growth last quarter, with nearly all segments rebounding strongly, with the exception of government spending and business investment in intellectual property products and nonresidential structures like gas and oil well drilling.

The economy grew at a historic 33.1% annualized rate in the July-September period. That followed a record 31.4% pace of contraction in the second quarter. Output remains 3.5% below its level at the end of 2019. There is no deal in sight for another round of fiscal stimulus.

Unfilled orders at factories fell 0.2% in September after declining 0.6% in August. Inventories at factories were unchanged for a second straight month, while shipments of manufactured goods rose 0.3%.

The government also reported that orders for non-defense capital goods excluding aircraft, which are seen as a measure of business spending plans on equipment, increased 1.0% in September, as reported last month.

Shipments of core capital goods, which are used to calculate business equipment spending in the GDP report, rose 0.5%. They were previously reported to have gained 0.3%.

Business spending on equipment rebounded at a 70.1% rate in the third quarter, ending five straight quarters of decline.