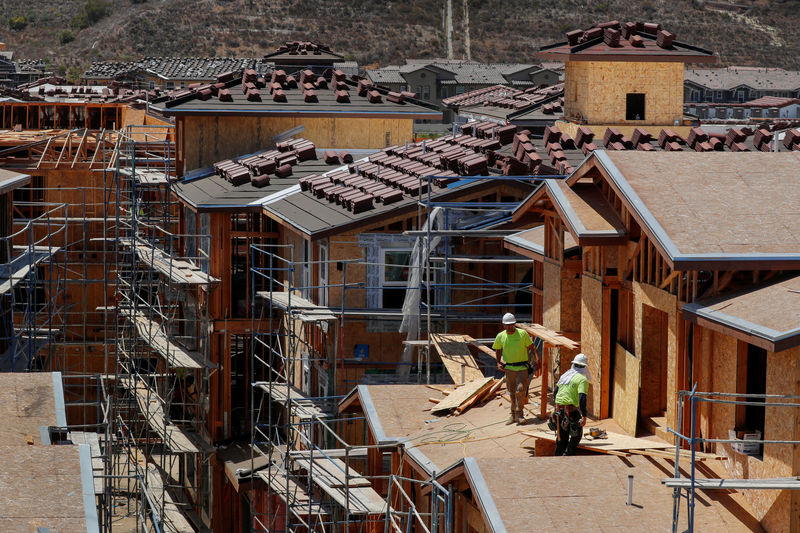 © Reuters. FILE PHOTO: Development and construction continues on a large scale housing project of over 600 homes in Oceanside, California

WASHINGTON (Reuters) – U.S. homebuilding tumbled to a more than two-year low in December as construction of both single and multi-family housing declined, the latest indication that the economy had lost momentum in the fourth quarter.

But there was some good news on the economy, with other data on Tuesday showing a rebound in consumer confidence in February after three straight monthly declines. Still, the economy’s outlook continues to be overshadowed by fears of a slowdown in global growth, fading fiscal stimulus, trade tensions and uncertainty over Britain’s departure from the European Union.

These risks were again highlighted by Federal Reserve Chairman Jerome Powell when he reaffirmed before lawmakers on Tuesday the U.S. central bank’s “patient” stance towards raising interest rates further this year.

“Regardless, the economy is moderating … which means the Fed should be able to maintain its cautious approach to monetary policy,” said Joel Naroff, chief economist at Naroff Economic Advisors in Holland, Pennsylvania.

Housing starts dropped 11.2 percent to a seasonally adjusted annual rate of 1.078 million units in December, the weakest reading since September 2016. Data for November was revised down to show starts at a 1.214 million unit rate instead of the previously reported pace of 1.256 million units.

Other details of the report were also downbeat, suggesting the housing market could remain sluggish for a while despite an easing in mortgage rates. Housing completions hit a more than one-year low in December, and while building permits rose, they were driven by the volatile multi-family housing segment.

Economists polled by Reuters had forecast that housing starts would slip to a pace of 1.250 million units last month.

The release of the December housing starts and building permits report was delayed by a 35-day partial shutdown of the federal government that ended on Jan. 25. No date has been set for the release of January’s report.

The Commerce Department said while delays in data collection could make it more difficult to determine the exact start and completion dates of construction, “processing and data quality were monitored and no significant issues were identified.”

The report joined weak December retail sales and business spending plans on equipment in suggesting that economic growth cooled down significantly at the tail end of 2018. It also implied that residential investment likely contracted in the fourth quarter, extending a decline that began in early 2018.

As a result, the Atlanta Fed trimmed its fourth-quarter gross domestic product estimate by one-tenth of a percentage point to a 1.8 percent annualized rate. The economy grew at a 3.4 percent pace in the third quarter.

A second report from the Conference Board on Tuesday showed its consumer confidence index increased 9.7 points to a reading of 131.4 in February after being held back by financial market volatility and the government shutdown.

Despite the rebound in confidence, the Conference Board said it expected the pace of economic growth to moderate in 2019.

The U.S. dollar fell to a three-week low against a basket of major currencies. U.S. Treasury prices rose, while stocks on Wall Street were little changed in volatile trade.

The housing market hit a soft patch last year amid higher mortgage rates as well as land and labor shortages, which led to tight inventories and more expensive homes.

But there are some glimmers of hope. A third report from S&P/Case-Shiller on Tuesday showed house prices in the 20-metro area increased 4.2 percent from a year ago in December, the smallest gain since November 2014, after rising 4.6 percent in November.

Slowing house price inflation was also corroborated by a fourth report from the Federal Housing Finance Agency showing house prices rose 0.3 percent on a monthly basis in December after advancing 0.4 percent in November.

Moderating house prices together with declining mortgage rates and steadily rising wages could make home buying more affordable, though economists expect the housing market weakness to persist at least through the first half of 2019.

“We do expect the housing data to pick up at some point in response to the recent decline in mortgage rates, but it likely will take some time before we start to see firming across many of the relevant figures,” said Daniel Silver, an economist at JPMorgan (NYSE:) in New York.

A survey last week showed homebuilder confidence increased in February, but builders continued to say costs were being kept high by land and labor shortages, and tariffs on lumber and other key building materials.

It was the fourth straight monthly decline in single-family homebuilding. Single-family starts dropped in the Northeast, Midwest and West, but rose in the South.

Housing completions fell 2.7 percent to 1.097 million units, the fewest since September 2017. Realtors estimate that housing starts and completion rates need to be in a range of 1.5 million to 1.6 million units per month to plug the inventory gap.