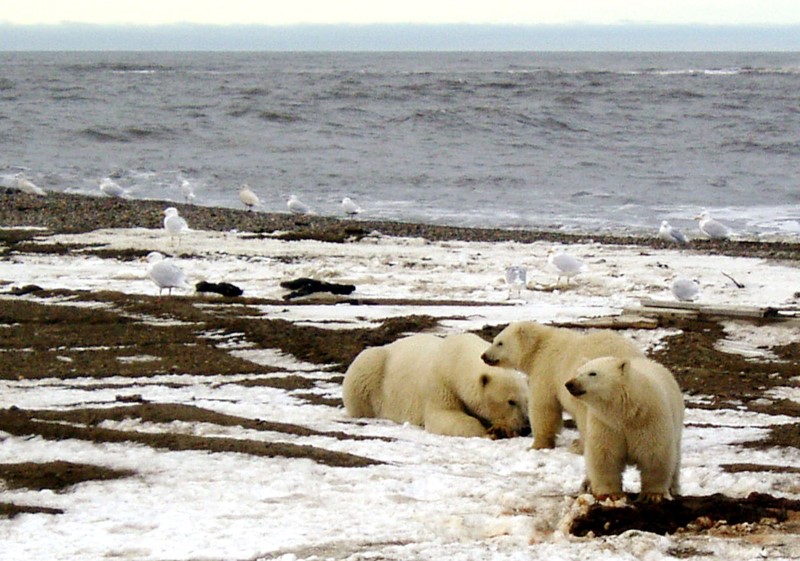 © Reuters. Polar bears are seen within the 1002 Area of the Arctic National Wildlife Refuge

(Reuters) – The Trump administration on Thursday proposed to loosen Obama-era safety regulations for the oil industry in the Arctic Ocean off Alaska to ease the way for petroleum extraction in the region, an effort that President-elect Joe Biden will likely throw out once in office.

The proposal would revise a suite of Obama-era rules crafted to improve safety in the extreme conditions of the Arctic after a Shell (LON:) drilling rig ran aground there in 2012. The company later abandoned oil exploration in the region and there are no active drilling operations there.

Now, much of the U.S. portion of the Arctic Ocean – the Chukchi Sea and part of the Beaufort Sea – is off-limits to new oil and gas leasing under a 2019 judge’s order that overturned President Donald Trump’s effort to open vast areas of the Arctic and Atlantic oceans to oil leasing. Biden has also vowed to ban all new drilling in federal lands and waters once he takes office.

The U.S. Department of Interior, which oversees the government’s offshore oil and gas program, said in a Thursday statement that the revisions would “remove unnecessary, burdensome provisions” in the 2016 rules.

It would specifically eliminate a requirement that oil operators submit a detailed operations plan before filing an exploration request, according to a fact sheet published by the Bureau of Safety and Environmental Enforcement.

The administration would also roll back a rule requiring operators to demonstrate they can quickly deploy containment equipment in case of spills, such as capping stacks or domes.

The changes were welcomed by the top oil industry trade group, which said developing Arctic resources is critical to U.S. national security.

“We look forward to reviewing a proposal that seeks to correct shortsighted restrictions to research and exploration of the world’s largest remaining conventional, undiscovered oil and resources,” American Petroleum Institute Senior Vice President of Policy, Economics and Regulatory Affairs Frank Macchiarola said in a statement.

Alaska Wilderness League, an environmental group, said in a statement that the rollback increases the risk that an oil spill in the region would endanger wildlife and coastal communities.

“There simply are no effective means to respond to or clean up an oil spill in the Arctic’s harsh and remote conditions,” Leah Donahey, legislative director for AWL, said.

Before it can be finalized, the proposal will undergo a 60-day public comment period that will begin once the rules are published in the Federal Register. A spokesman for BSEE could not say when that will happen.

Biden is scheduled to be inaugurated in 61 days, on Jan. 20.