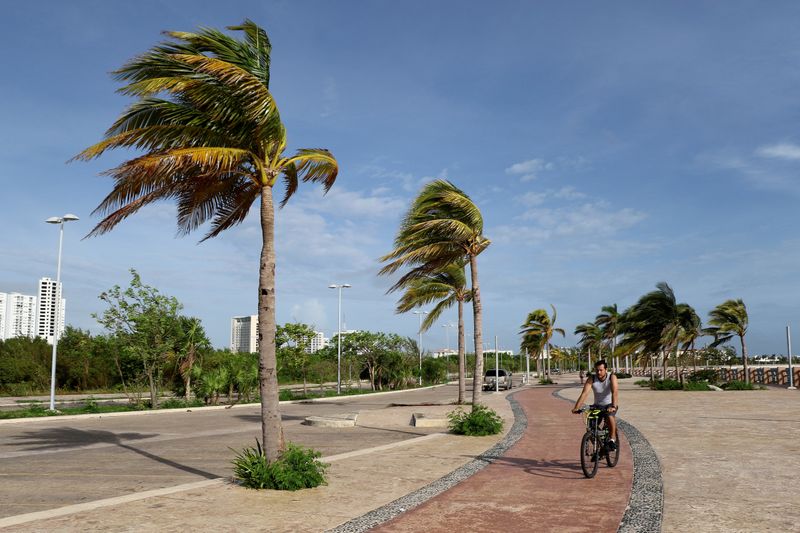 © Reuters. FILE PHOTO: A man rides his bicycle while palm trees sway in the wind as Hurricane Zeta approaches Cancun

HOUSTON (Reuters) – Energy firms and ports along the U.S. Gulf Coast were bracing on Tuesday for another test as Hurricane Zeta, the 11th hurricane of the season, entered the Gulf of Mexico.

Some oil producers were pulling workers for at least the sixth time since June, a process made more difficult by the novel coronavirus pandemic with workers required to be tested for the virus before returning to work.

Zeta was the third named storm this month to hit Mexico’s Quintana Roo state, forecasters said, setting a new record for the month. On Monday, it became the 11th hurricane of the Atlantic season, which on average has six.

A hurricane watch was issued for parts of Louisiana to the Mississippi-Alabama border by the U.S. National Hurricane Center (NHC). Zeta could hit the U.S. coast on Wednesday at or near hurricane strength, the NHC said.

Energy ports from Baton Rouge to Pascagoula were operating under advisories warning of the potential for gale force winds. A Louisiana deep water oil export port said it was implementing its inclement weather plan.

In early Asia trading, U.S. and futures both gained a fraction after falling more than 3% on Monday over fears of rising COVID-19 cases and increased crude supplies.