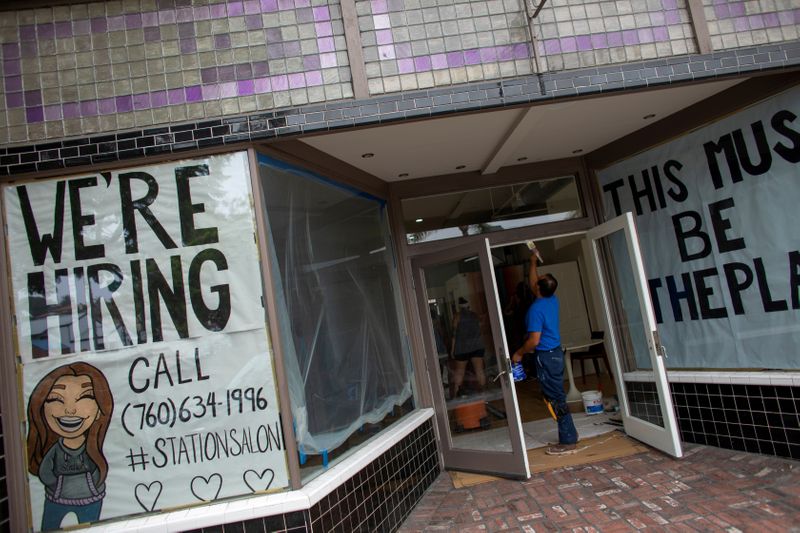 © Reuters. FILE PHOTO: A new business advertises for workers as it prepares to open up during the outbreak of the coronavirus disease in California,

WASHINGTON (Reuters) – U.S. private payrolls increased less than expected in October, providing an early sign of a slowdown in economic activity as fiscal stimulus diminishes and new COVID-19 infections surge across the country.

Private payrolls increased by 365,000 jobs last month, the ADP National Employment Report showed on Wednesday. Data for September was revised up to show 753,000 jobs added instead of the initially reported 749,000. Economists polled by Reuters had forecast private payrolls would rise by 650,000 in October.

The U.S. presidential election hung in the balance on Wednesday, with a handful of states set to decide the outcome in the coming hours or days, even as Donald Trump falsely claimed victory and made unfounded allegations of electoral fraud.

The ADP report is jointly developed with Moody’s (NYSE:) Analytics. Though it has fallen short of the government’s private payrolls count since May because of methodology differences, it is still watched for clues on the labor market’s health.

It was released ahead of the government’s closely watched, and comprehensive, monthly employment report on Friday. According to a Reuters survey of economists, private nonfarm payrolls likely increased by 700,000 jobs in October after rising 877,000 in September.

With government payrolls expected to have dropped again last month as more temporary workers hired for the Census departed and state and local government struggle with tight budgets, overall nonfarm payrolls are forecast increased by 600,000 jobs after rising 661,000 in September.

That would leave employment 10.1 million below its peak in February. Job growth has cooled from a record 4.781 million in June. The labor market recovery was boosted by more than $3 trillion in government pandemic relief for businesses and workers, which is virtually gone.

The resurgence in coronavirus cases across the country could lead to renewed business restrictions to slow the spread of the respiratory illness as winter approaches.

Though new weekly applications for unemployment benefits have been gradually declining they remain at recessionary levels. Data from Homebase, a payroll scheduling and tracking company, showed the number of employees working in October little changed relative to September levels.

The moderation in the labor market recovery is consistent with analysts’ expectations for a sharp slowdown in economic growth in the fourth quarter. The economy grew at a historic 33.1% annualized rate in the third quarter. That followed a

a record 31.4% pace of contraction in the April-June quarter.