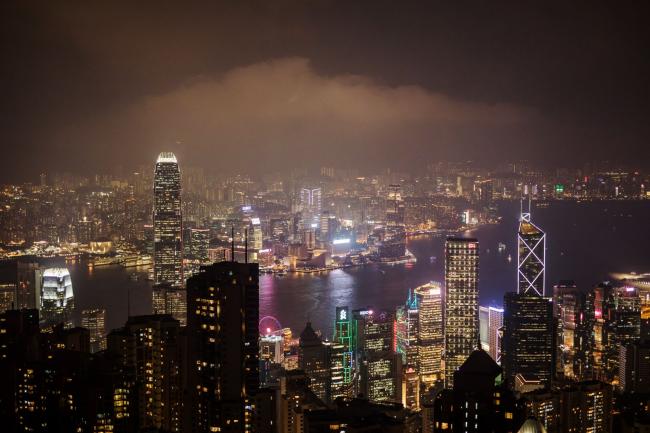 © Bloomberg. Buildings on the Hong Kong skyline are seen from Victoria Peak at night in Hong Kong, China, on Wednesday, Aug. 28, 2019. Anti-government protesters in Hong Kong have sustained their momentum since the first rally on June 9, creating the biggest crisis for Beijings rule over the former British colony since returning to China in 1997. On Monday, Sept. 16, the protests, which show no sign of stopping, will reach the 100-day mark. Photographer: Bloomberg/Bloomberg

(Bloomberg) — The Biden administration warned investors about the risks of doing business in Hong Kong, issuing an advisory that said China’s push to exert more control over the financial hub threatens the rule of law and endangers employees and data.

It said those threats fall into four areas: “risks for businesses following the imposition of the NSL; data privacy risks; risks regarding transparency and access to critical business information; and risks for businesses with exposure to sanctioned Hong Kong or PRC entities or individuals.”

“Business and rule of law risks that were formerly limited to mainland China are now increasingly a concern in Hong Kong,” according to the advisory, which was issued by the Departments of State, Commerce, Treasury and Homeland Security.

The advisory is the latest salvo in a competition that President Joe Biden has called one of the defining challenges of the century, and it signals a remarkable turnaround for a city which over decades became a financial hub on a par with London and New York.

The move underscored how swiftly China’s push for more control over Hong Kong has brought an end to the “one country, two systems” approach that Beijing had promised when it took back control of the former British colony in 1997. That’s proved a death knell for the island’s independent judiciary, pugnacious media and lively protest movements.

“The situation in Hong Kong is deteriorating, and the Chinese government is not keeping its commitment that it made, how it would deal with Hong Kong,” Biden said Thursday, ahead of the advisory’s release.

Shortly before the advisory was issued, Beijing pledged a “firm response” to any action by Washington.

“We urge the U.S. side to stop interfering in the Hong Kong issue and China’s internal affairs in any form,” Chinese Foreign Ministry spokesman Zhao Lijian told a regular news briefing Friday in Beijing.

While the advisory doesn’t order companies to scale back investments or leave Hong Kong, Biden administration officials worry that major banks and other multinational businesses with headquarters in the city haven’t yet come to grips with just how much the landscape there has changed and how much risk they now face.

Specifically, the new advisory warns of the Chinese government’s ability to gain access to data that foreign companies store in Hong Kong.

It comes amid news that China plans to exempt companies going public in Hong Kong from first seeking the approval of the country’s cybersecurity regulator. The exemption, which, according to people familiar with the matter was outlined by officials in recent meetings with bankers, would remove one hurdle for businesses that list in the Asian financial hub instead of the U.S.

The world’s two biggest economies, still so dependent on each other for trade and economic growth, are in confrontations in more and more areas. They are in conflict over the race to develop advanced semiconductor technology, the battle to supply other nations with next-generation telecommunications equipment and the treatment of ethnic minorities in the Xinjiang region.

Despite the turmoil of the past few years, foreign banks and other companies have rushed to build up their presence in Hong Kong, still seen as a gateway to the broader Chinese market.

Citigroup Inc (NYSE:). said in May that it plans to hire more than 1,000 professionals across its wealth franchise in Hong Kong over the next five years, stepping up its expansion amid an increasingly heated grab for talent in the region. Goldman Sachs Group Inc (NYSE:). is hiring 320 staff in China and Hong Kong, as China opens its $54 trillion financial market fully to foreign brokerages and asset managers.

The advisory from the U.S. follows a Trump administration decision last year to roll back special trade privileges granted to Hong Kong in recognition of China’s past promises to ensure a “high degree of autonomy” for the city from Beijing.

The “one country, two systems” approach to Hong Kong had already been under pressure before massive anti-government protests erupted in 2019. Beijing quickly moved to silence independent voices, arresting protest leaders, imposing a national security law that allows for the extradition of people accused of crimes to China and forcing the closing of Apple (NASDAQ:) Daily, a high-profile media outlet critical of corruption and the Communist Party.

U.S.-China ties will struggle to improve given the political land mines facing the two nations’ leaders in the months and years ahead.

The Biden administration’s support for reopening a review of how the Covid-19 pandemic started — and whether it leaked from a lab in Wuhan — infuriated officials in Beijing. China’s leaders were also surprised at the administration’s decision to leave trade tariffs imposed by Trump in place.

Meanwhile, calls are growing for the U.S. to boycott the 2022 Winter Olympics in Beijing, while the midterm elections in the U.S. later that year will only amplify the rhetoric. In China, President Xi Jinping will likely sharpen his own tone as he looks to further cement his power with a third five-year term, a reversal of three decades of policy that limited leaders to two terms.

Biden and Xi were to take part Friday in a virtual call among APEC nations. While they have done other virtual events together, Biden hasn’t met Xi in person as president, and officials are undecided how much interaction the two leaders will have at a Group of 20 meeting in Rome this October.