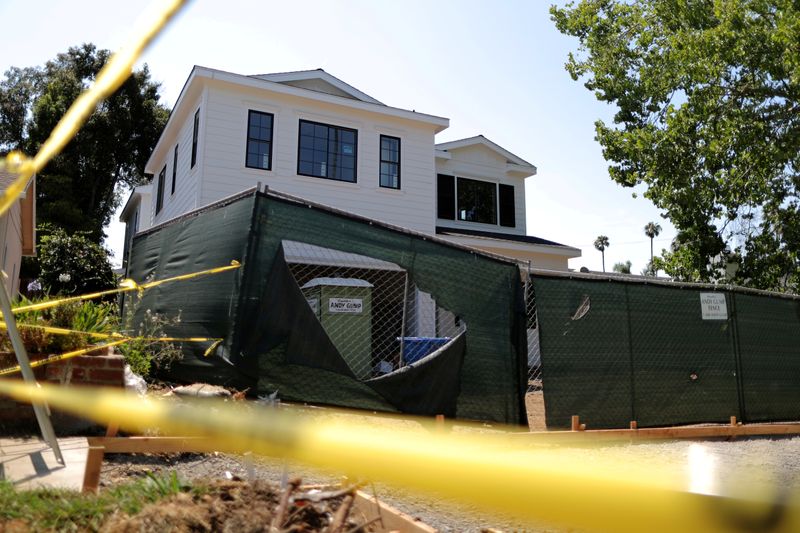 © Reuters. FILE PHOTO: A new home is seen under construction in Los Angeles

WASHINGTON (Reuters) – U.S. single-family homebuilding raced to a more than 13-year high in September, cementing the housing market’s status as the star of the economic recovery amid record-low mortgage rates and a migration to the suburbs and low-density areas in search of more room for home offices and schooling.

The report from the Commerce Department on Tuesday also showed building permits and housing completions scaling levels last seen in 2007. That could help to ease an acute shortage of homes for sale, which has fueled house price inflation.

The data reinforced expectations that the economy rebounded sharply in the third quarter after suffering its deepest contraction in at least 73 years in the second quarter. But the recovery from the COVID-19 recession has entered a period of uncertainty, with fiscal stimulus depleted.

“It appears the strength in housing is being driven by the first-time home buyer coming off the sidelines and taking advantage of historically low mortgage rates along with the opportunity to purchase a home in a location they might not otherwise consider outside of the current work-from-home environment,” said Scott Volling, principal at PwC in Atlanta.

Single-family homebuilding, the largest share of the housing market, jumped 8.5% to a seasonally adjusted annual rate of 1.108 million units last month, the highest level since June 2007. That offset a 16.3% decline in starts for the volatile multi-family segment to a pace of 307,000 units.

Overall, housing starts increased 1.9% to a rate of 1.415 million units last month. Groundbreaking activity rose in the West, South and Northeast, but fell in the Midwest.

Economists polled by Reuters had forecast starts increasing to a rate of 1.457 million units in September.

Homebuilding advanced 11.1% year-on-year, with single-family starts surging 22.3%. Further gains in single-family home construction are likely, with building permits shooting up 7.8% to a rate of 1.119 million units last month, the highest level since March 2007.

Builders are taking advantage of the strong demand, lean inventories and low mortgage rates to ramp-up construction. A survey on Monday showed confidence among single-family homebuilders hit a record high in October.

The housing market has been a bright spot in the economy despite 25.3 million people being on unemployment benefits. Unemployment has disproportionately affected low-wage workers, who are typically young and renters. The 30-year fixed mortgage rate is around an average of 2.81%, according to data from mortgage finance agency Freddie Mac (OTC:).

The Commerce Department report suggested a swift turnaround in the housing market in the third quarter after an unprecedented collapse in the April-June quarter. Data last week showed an acceleration in retail sales in September.

Growth estimates for the July-September quarter are as high as a 35.2% annualized rate, which would recoup roughly two-thirds of the output lost because of the coronavirus.

The economy contracted at a 31.4% pace in the second quarter, the deepest decline since the government started keeping records in 1947. With government money gone, growth estimates for the fourth quarter have been slashed to as low as a 3% rate from above a 10% pace.

“We expect some moderation in the pace of housing starts in the fourth quarter as a resurgence in COVID-19 cases, a slow recovery and a weak labor market take a toll on the resilient housing sector,” said Nancy Vanden Houten, lead economist at Oxford Economics in New York. “However, in the immediate term, the risk may be for further upside surprises.”

Overall permits for future homebuilding increased 5.2% to a rate of 1.553 million units in September, the highest since March 2007. Multi-family building permits slipped 0.9% to a rate of 434,000 units.

“The relative strength of single-family construction compared to multifamily units could partly reflect a shift in housing demand away from multifamily structures in more densely populated cities and towards single-family units in suburbs and less populated areas,” said Veronica Clark, an economist at Citigroup (NYSE:) in New York. “This trend would also be consistent with softer rents but resilient house prices recently.”

Housing completions vaulted 15.3% to a rate of 1.413 million units last month, the highest since August 2007. Realtors estimate that housing starts and completion rates need to be in a range of 1.5 million to 1.6 million units per month to close the inventory gap. The stock of housing under construction was unchanged at a rate of 1.209 million units.

“We expect housing starts for the year to total around 1.4 million units,” said David Berson, chief economist at Nationwide in Columbus, Ohio. “This is one of those very rare periods when starts will rise during a recession year.”