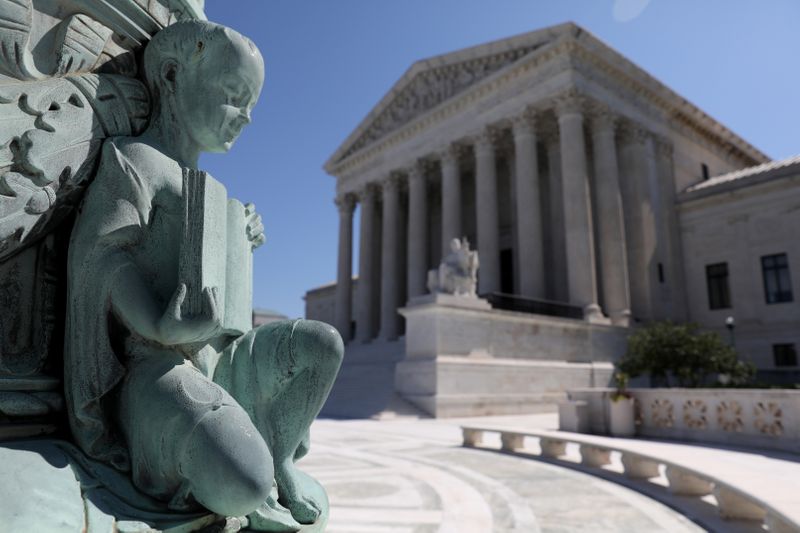 © Reuters. A cherub figure with a book, symbolizing learning, is seen in a general view of the U.S. Supreme Court building in Washington

WASHINGTON (Reuters) – The U.S. Supreme Court on Friday agreed to hear a bid by President Donald Trump’s administration to revive pilot programs adopted by the states of Arkansas and New Hampshire that allow work requirements to be imposed on people who receive healthcare under the Medicaid program for the poor.

The justices took up the administration’s appeals of rulings by a lower court that found the work requirement programs to be unlawful. The case potentially could become moot once Democratic President-elect Joe Biden takes office on Jan. 20. Seventeen other states are pursuing similar policies.

“The Biden administration can certainly change this policy, and we hope that will happen,” said Jane Perkins, legal director of the National Health Law Program, a healthcare advocacy group.

The administration said in court papers that the appeals court rulings cast a legal shadow on the efforts in those other states to adopt work requirements for Medicaid, a state-federal program that provides medical insurance for the poor. New Hampshire and Arkansas filed court papers in support of the administration.

The U.S. Department of Health and Human Services in 2018 approved those projects as part of a push to put a conservative stamp on Medicaid, which was expanded in 37 states and the District of Columbia following the 2010 passage of the Affordable Care Act, also known as Obamacare, to help provide coverage to millions more Americans.

Under the Republican Trump, the department gave the go-ahead for states to carry out test projects requiring able-bodied people on Medicaid to work or do volunteer work.

The approval of the waivers prompted lawsuits by residents enrolled in various states’ Medicaid programs, including ones in Arkansas and New Hampshire.

The U.S. Court of Appeals for the District of Columbia Circuit in February upheld Boasberg’s decision in the Arkansas case, saying HHS failed to adequately consider the extent to which the state’s requirements would cause people to lose healthcare coverage. The D.C. Circuit reached the same conclusion for the New Hampshire program in a May ruling.

In court papers, Trump’s administration argued that a federal law called the Social Security Act specifically allowed HHS to approve any experimental or pilot project that is likely to assist in promoting the objectives of Medicaid.

The D.C. Circuit ruled that Medicaid has “one primary purpose, which is providing healthcare coverage without any restriction geared to healthy outcomes, financial independence or transition to commercial coverage.” The court noted that 18,000 people – about a quarter of those subject to the requirement – lost their coverage in the first five months after Arkansas Works was put in place. The clocks are ticking down By Reuters

Hungary, Poland dig in heels in row with EU over budget, rule of law By Reuters