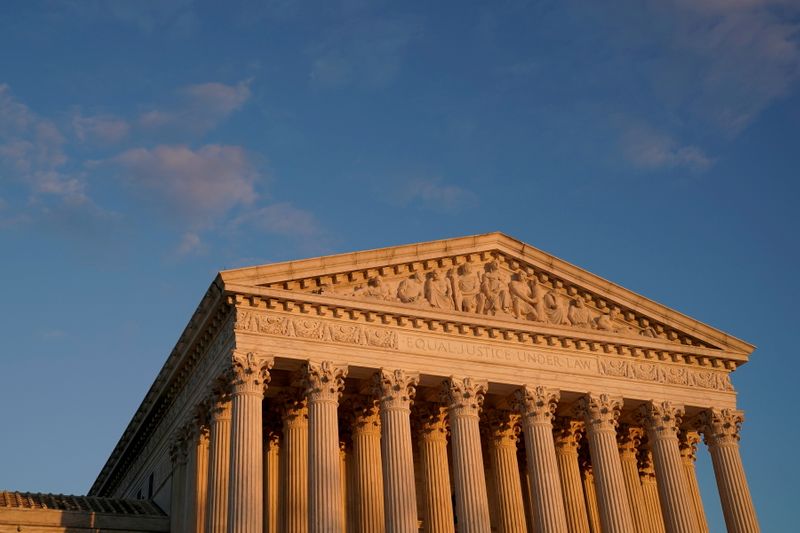 By Lawrence Hurley and Valerie Volcovici

WASHINGTON (Reuters) -The U.S. Supreme Court on Friday agreed to hear a bid by states, including coal producer West Virginia, and industry groups to limit federal power to regulate carbon emissions from power plants under a landmark environmental law.

The court’s decision to take up the case could complicate efforts by President Joe Biden’s administration to issue new and more stringent regulations under the Clean Air Act aimed at reducing emissions linked to global climate change.

The announcement came just two days before Biden arrives in Glasgow, Scotland, for the UN COP26 climate summit where nearly 200 countries are meeting to flesh out details of a new climate pact.

About 20 states and various industry groups, including coal interests, had appealed a lower court’s ruling https://www.reuters.com/article/us-usa-climate-powerplants/u-s-court-deals-final-blow-to-trump-epas-clean-power-rule-replacement-idUSKBN29O2BO striking down a regulation issued by Republican former President Donald Trump’s administration intended to constrain the regulation of carbon emissions from power plants. The ruling was made in January 2021 by the U.S. Court of Appeals for the District of Columbia Circuit.

Those states and groups have opposed regulating carbon emissions under the Clean Air Act. The Trump administration’s Affordable Clean Energy rule was challenged in court by states and groups that support aggressive action to curb such emissions.

Trump’s deregulatory approach stood in contrast to that of his Democratic predecessor Barack Obama, whose Clean Power Plan would have given the U.S. Environmental Protection Agency broad authority to regulate carbon dioxide emissions mainly from coal-fired power plants.

The court will likely hear the four combined cases in its current term, with a ruling due by the end of June.

The Supreme Court in 2016 blocked Obama’s regulation – the centerpiece of his strategy to combat climate change – from taking effect but never ruled on its lawfulness.

Biden’s administration has said it will not seek to resurrect Obama’s Clean Power Plan. Biden has supported efforts in Congress to pass legislation that would regulate power plant carbon emissions.

The president on Thursday had secured a deal with Congressional Democrats around a $555 billion framework for to carry out his climate agenda that he had hoped would boost U.S. credibility ahead of the COP26 talks.