Treasury investors have been bombarded with an array of concerning news over the past few days, but yields surged on Monday as optimism grew with reports that President Donald Trump Monday evening to continue treatment for COVID-19 at the White House.

News of the president’s infection pushed down yields on Friday, but they rose by the end of the day as House Speaker Nancy Pelosi said Trump’s illness “changes the dynamic” of attempts to reach a compromise on fresh fiscal stimulus.

Hopes of a continued to grow on Monday. Pelosi and Treasury Secretary Steven Mnuchin continued their telephone negotiations and White House chief of staff Mark Meadows said the president is eager to get a deal.

The prospect of more borrowing by the government, pushing down prices and raising yields, buoyed Treasury yields. Yields move inversely to bond prices.

A key index for the services sector—the Institute of Supply Management —rose to 57.8 in August from 56.9, a positive economic indicator.

The Treasury note yield rose to 0.772% late Monday from a 0.694% close on Friday. Declining prices are also an indication that investors are willing to take on more risk. 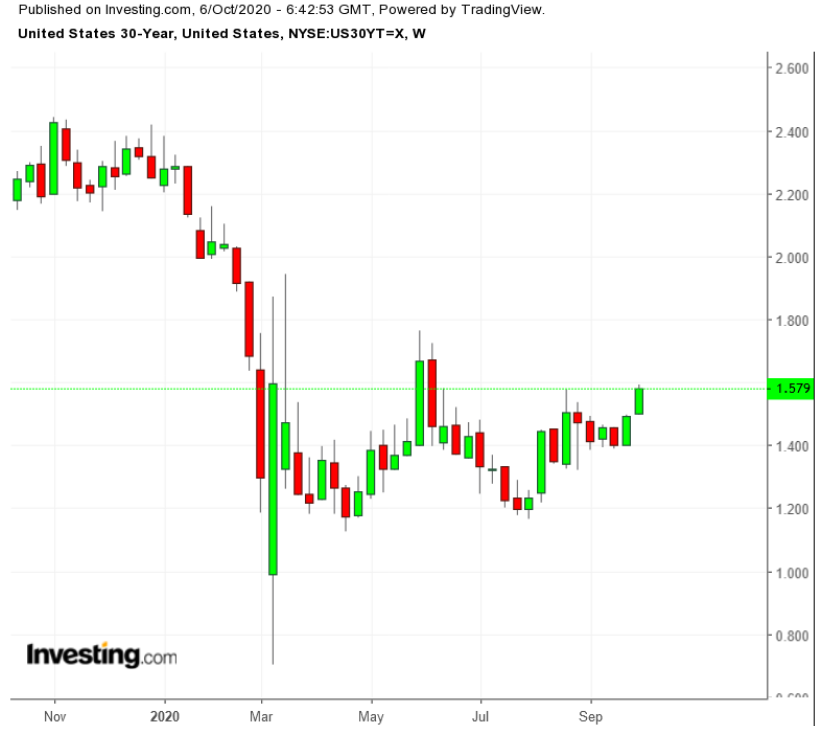 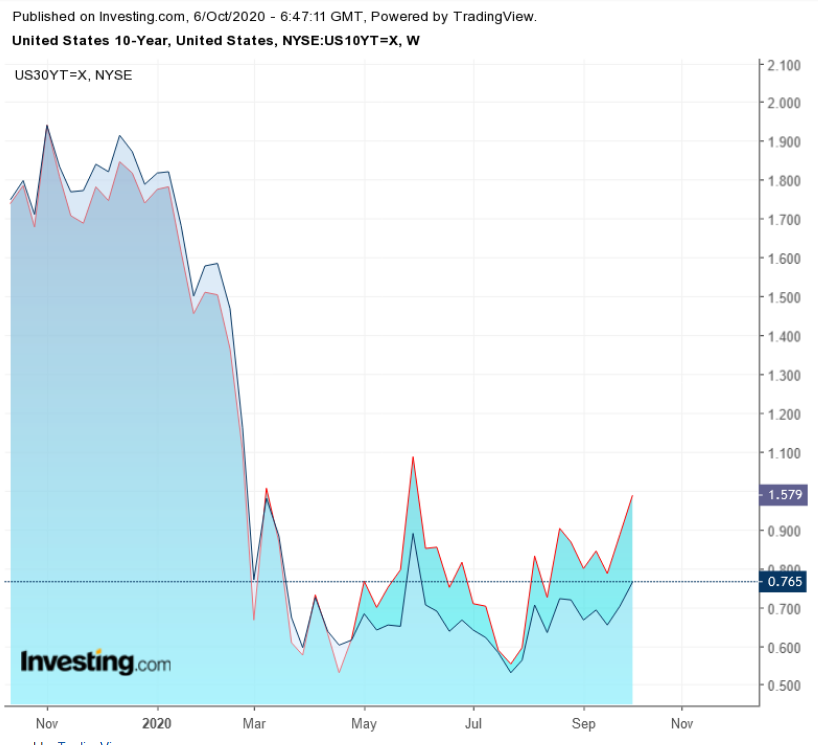 The spread between the 10-year and 30-year widened slightly from a week ago, to 78 basis points from 76 bps.

The Labor Department’s —the last one before the presidential election on November 3—showed employment rising by 661,000 jobs, short of the 800,000 forecast by economists. However, the dropped below 8% for the first time since February, to 7.9%.

More volatility is in store as campaign strategies for the last four weeks have been upended by the wave of COVID infections hitting the White House and Congress. Everything from the two further debates between Trump and Democratic challenger Joe Biden to the rushed confirmation of Judge Amy Coney Barrett to the Supreme Court is now up in the air.

The vice-presidential debate scheduled for Wednesday took on added significance with the possible impairment of the president. Both presidential candidates are in their 70s, with the vulnerability that presents for the coronavirus infection.

In fact, most everything takes on added significance in a year that has seen so many twists and turns in an unprecedented situation. The US Federal Reserve will release of its September meeting on Wednesday, and it may provide details of what policymakers see ahead for the economy and whether they plan to increase monetary accommodation after announcing new flexibility on inflation.

News of Trump’s infection added to the appeal of European government bonds, especially those of Italy. The Italian bonds have a positive yield, unlike those of Germany, and bond purchases by the European Central Bank are supporting prices and the promise of European Union funds in their emergency recovery program boosts the economic outlook.