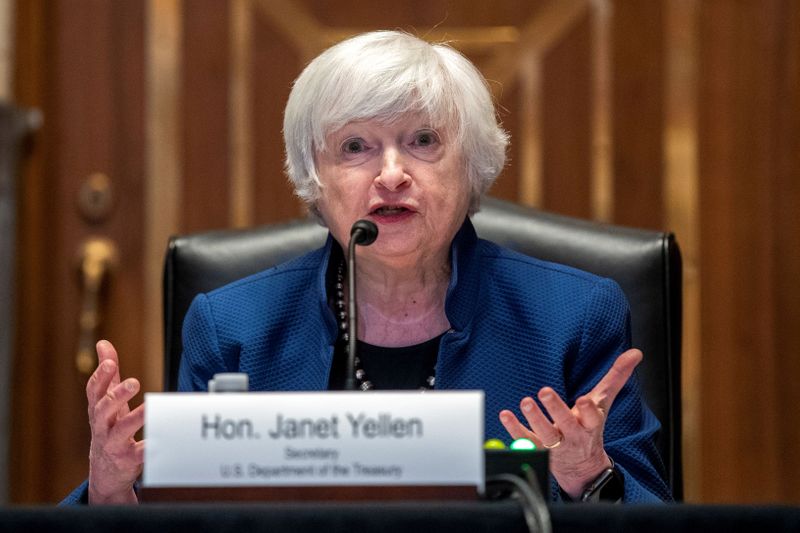 (Reuters) -U.S. Treasury Secretary Janet Yellen announced on Friday that she will meet with regulators next week to discuss “interagency work” on stablecoins, a rapidly growing class of digital currencies that is facing growing scrutiny from policymakers.

The President’s Working Group on Financial Markets will meet on Monday with the Office of the Comptroller of the Currency and the Federal Deposit Insurance Corporation to go over the benefits and risks of stablecoins, a form of cryptocurrencies that are pegged to more traditional assets, including fiat currencies such as the dollar.

“In light of the rapid growth in digital assets, it is important for the agencies to collaborate on the regulation of this sector and the development of any recommendations for new authorities,” Yellen said in a statement, noting it was important for regulators to assess the potential benefits of stablecoins while also “mitigating risks they could pose to users, markets, or the financial system.”

Stablecoins and other digital payments options are receiving more attention from lawmakers, Federal Reserve officials and other policymakers as new options emerge and gain traction.

Fed Chair Jerome Powell told lawmakers during congressional hearings this week that stablecoins are “growing incredibly fast” but pointed to their lack of appropriate regulation as a point of concern.

“If we’re going to have something that looks just like a money-market fund or bank deposit … we really ought to have appropriate regulation and today we don’t,” Powell said.

And last month, Boston Fed president Eric Rosengren called the name stablecoins a “misnomer,” adding that they can be volatile and may pose financial stability risks.

The Fed is in the process of evaluating the digital payments universe to determine if it should issue a central bank digital currency, known for short as CBDCs.

Powell said this week that one of the strongest arguments in favor of a CBDC is that it could lessen the need for multiple stablecoins or cryptocurrencies, but he made it clear it is not certain that the Fed will be moving in that direction.

“I am legitimately undecided on whether the benefits outweigh the costs or vice versa,” Powell said.

IMF chief in spotlight after China rigging report By Reuters