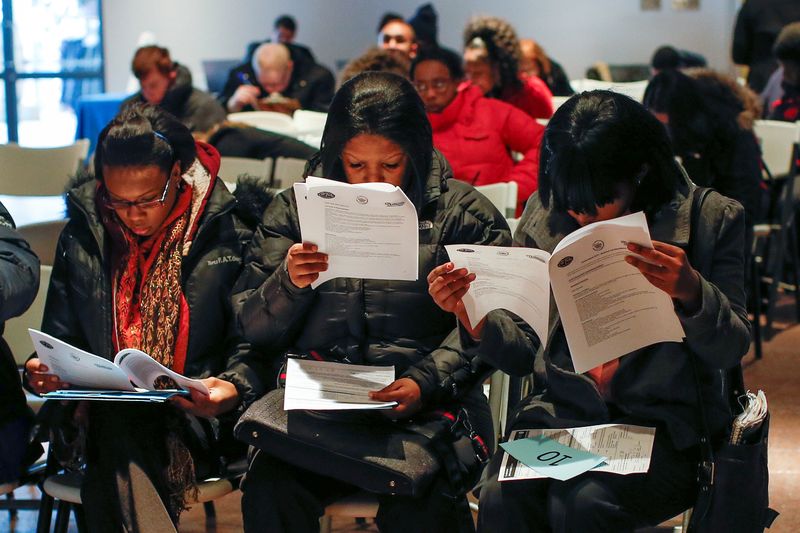 © Reuters. FILE PHOTO: People fill out application forms before a screening session for seasonal jobs at Coney Island in the Brooklyn borough of New York

Initial claims for state unemployment benefits totaled a seasonally adjusted 742,000 for the week ended Nov. 14, compared to 711,000 in the prior week, the Labor Department said on Thursday. Economists polled by Reuters had forecast 707,000 applications in the latest week.

Daily new COVID-19 cases in the United States have been exceeding 100,000 since early this month, pushing the number of infections in the country above 11 million, according to a Reuters tally. Forty-one states have reported daily record increases in coronavirus infections and 20 have registered new all-time highs in coronavirus-related deaths from day to day.

Many jurisdictions have imposed restrictions on businesses as the death toll surpassed 250,000 since the pandemic started in the United States. President-elect Joe Biden will inherit the public health crisis and frail economy when he takes over from President Donald Trump on Jan. 20.

Unemployment claims dropped from a record 6.867 million in March as about 80% of the people temporarily laid off in March and April were rehired. That accounted for most of the rebound in job growth over the last six months.

Raging coronavirus infections and restrictions will weigh heavily on bars and restaurants as well as other businesses in the services sector that attract crowds.

“For the most part, companies in services industries, such as restaurants and bars, have been doing the rehiring as the lifting of lockdown restrictions in the spring and summer enabled them to reopen for business,” said Bob Schwartz, a senior economist at Oxford Economics in New York. “The workers who have been lucky enough to regain their jobs are the very ones most at risk of being furloughed again.”

The resurgence in COVID-19 cases coincides with the end of more than $3 trillion in government pandemic relief for businesses and workers, which helped to preserve jobs and lift the economy of the depths of the worst recession since the Great Depression.

Claims remain above their 665,000 peak during the 2007-09 Great Recession. The claims data covered the period that the government surveyed businesses for the nonfarm payrolls portion of November’s employment report.

The government reported early this month that nonfarm payrolls increased by 638,000 jobs in October, the smallest gain since the jobs recovery started in May. That followed 672,000 jobs added in September. Only 12.1 million of the 22.2 million jobs lost in March and April have been recovered.