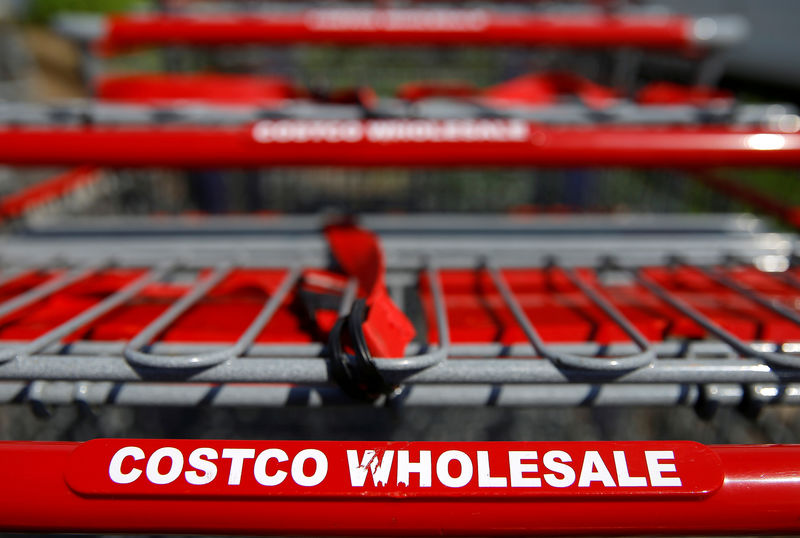 © Reuters. Shopping carts are seen at a Costco Wholesale store in Glenview

WASHINGTON (Reuters) – U.S. wholesale inventories increased by the most in more than five years in December as sales fell for a third straight month, suggesting an unintended piling up of goods at wholesalers that could be flagging a slowdown in demand.

The surge in wholesale stocks reported by the Commerce Department on Monday, however, implied inventories were probably less of a drag on economic growth in the fourth quarter than previously thought. As result, economists boosted their fourth-quarter gross domestic product growth estimates by as much as half a percentage point to as high as a 2.4 percent annualized rate.

“While the jump in inventories in December represents an upside risk to the fourth-quarter GDP report coming out on Thursday, declining wholesale and retail sales in December could be another sign of weaker demand and slow GDP growth in the first quarter,” said Scott Anderson, chief economist at Bank of the West in San Francisco.

Economists polled by Reuters had forecast inventories at wholesalers rising 0.3 percent in December.

The component of wholesale inventories that goes into the calculation of GDP growth rose 1.1 percent in December. The December wholesale inventory report was delayed by a five-week partial shutdown of the federal government that ended on Jan. 25.

Economists at JPMorgan (NYSE:) raised their fourth-quarter GDP estimate to a 1.9 percent rate from a 1.4 percent pace. Data forecasting firm Macroeconomic Advisers lifted its forecast by two-tenths of a percentage point to a 2.4 percent rate.

Reports on December retail sales and business spending plans on equipment have also pointed to a slowdown in growth at the tail end of 2018. The government will publish its delayed fourth-quarter GDP report on Thursday.

Sales at wholesalers dropped 1.0 percent in December after falling 1.2 percent in November. Some of the drop in sales reflected weak prices. Motor vehicles sales decreased 2.2 percent, the biggest fall since February 2017. There were also declines in sales of petroleum, hardware, paper and metals.

At December’s sales pace it would take wholesalers 1.33 months to clear shelves, the most since November 2016, up from 1.30 months in November.