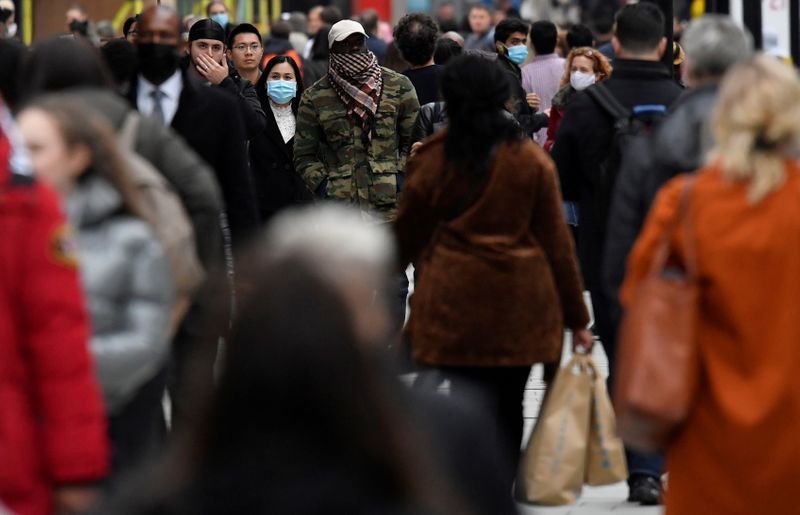 © Reuters. FILE PHOTO: Shoppers walk along Oxford Street, in the centre of London’s retail shopping area, amid the spread of the coronavirus disease

LONDON (Reuters) – Britain’s government borrowed 22.3 billion pounds ($29.6 billion) in October, well below economists’ forecasts for the month though borrowing so far this financial year remains at a record high.

Separate figures released at the same time by the Office for National Statistics showed retail sales rose 1.2% in October, and were 5.8% higher than a year earlier, bucking poll forecasts for growth to slow to 4.2%.

Britain’s government is on course to borrow close to 400 billion pounds this financial year as it battles the social and economic impact of COVID, the highest borrowing relative to the size of the economy since World War Two.

During the first seven months of the financial year it has borrowed 214.9 billion pounds, taking public debt to 2.077 trillion pounds or 100.8% of annual economic output in October.

Stronger growth in the economy in the third quarter meant that as a share of GDP, debt was down slightly from September’s peak of 101.2%, which was the highest level since 1960/61.

The government’s Office for Budget Responsibility will publish its first forecast of borrowing for this year and next on Nov. 25, and finance minister Rishi Sunak will unveil spending plans for the next financial year too.

Britain, like other large economies, is currently able to borrow cheaply to fund its spending to contain the pandemic, much of which is likely to end once the pandemic passes.

But the Bank of England has warned that some long-term economic damage or scarring is likely, and last month the International Monetary Fund said Britain would probably need to raise taxes after the pandemic to fill the gap.