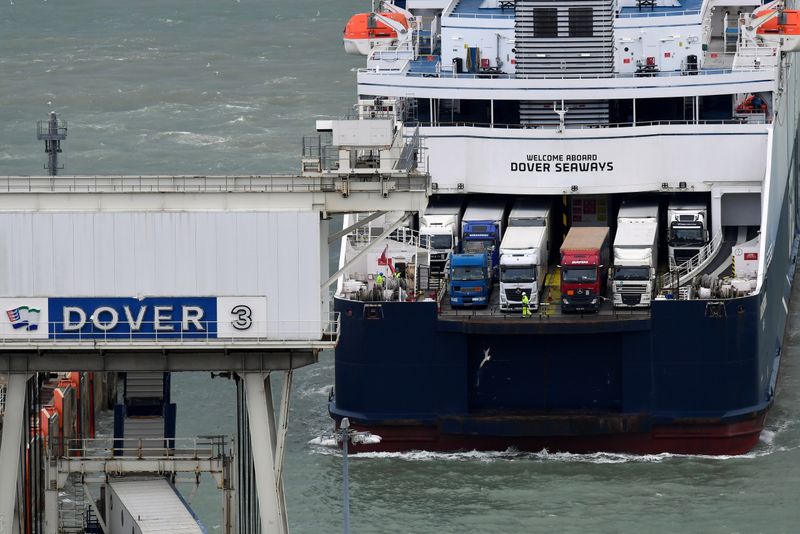 © Reuters. Lorries are seen at the Port of Dover

The frantic activity reflects rising concerns that Britain’s final departure from the world’s biggest trading bloc will bring chaos at its frontiers as companies struggle to navigate a full customs border for the first time since 1993.

Logistics companies told Reuters they have seen a surge in demand to bring goods into the country before any potential disruption in January, and customs agents report being overwhelmed by pleas for help from traders grappling with the rules for the first time.

“We have told our customers that the best thing you can do now is stock up, stockpile, and they’re bringing in as much as they can,” Jon Swallow, director of Jordon Freight, told Reuters of the changing dynamic in the last two weeks.

“The consequence of that is there’s simply not enough capacity and the prices are going through the roof.”

Swallow said the demand had pushed prices up by around 20% in recent weeks and further rises were likely in December.

Fellow freight specialist Tony Shally said his Espace Europe had seen the cost of journeys between Poland and England, and Northern France and England, rise by more than 10%.

Companies had stockpiled goods before previous Brexit deadlines but many held off this time, weakened by the COVID-19 hit to cash flow.

Along with the rush to bring in goods, companies are also having to prepare to deal with customs declarations.

Sam Harris, operations manager at provider Freight UK, said it had become a full-time job just to answer the phone to new customers. “Most know nothing about customs,” he said. “Everyone is panicking.”

“We had a farmer on the phone and he had no idea whatsoever about what needed to be done.”

Britain’s logistics industry estimates that 250 million customs declarations a year will be needed for EU trade.

The Road Haulage Association estimates that will require some 50,000 customs agents, compared with between 5,000 and 10,000 now.

While the government has provided 84 million pounds to train staff, many companies in the small sector have refused to take on workers before they know how the new system will work. Those companies that can provide customs are therefore in huge demand.

Liam Smyth at the British Chambers of Commerce, said the BCC had signed up almost 100 new customers in the last week. A month ago, inquiries were just 10 a week.

Chris Goodfellow, managing director of Locker Freight, has told his staff to stop fielding calls and only process emailed requests, after they struggled to serve existing clients.

“I don’t believe people were burying their heads in the sand — they had just been overwhelmed by what had gone on (with COVID-19) and when they realised that Brexit would still go ahead as planned, panic started to set in,” he said.

Bifa, the trade association representing UK freight providers, said some firms had recruited more staff and others were looking to outsource the work to India and elsewhere. But others have struggled to recruit workers with the right experience, Bifa said.