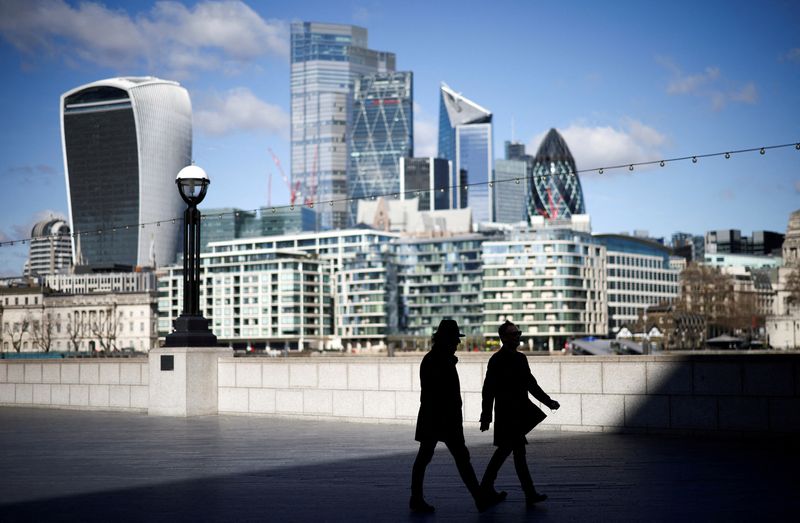 © Reuters. FILE PHOTO: The City of London financial district can be seen as people walk along the south side of the River Thames, London, Britain, March 19, 2021. REUTERS/Henry Nicholls/File Photo

LONDON (Reuters) – The downturn in British businesses steepened this month as they battled soaring costs and faltering demand, according to a survey on Friday that hammered home the rising risk of recession.

Released just as finance minister Kwasi Kwarteng was due to flesh out the economic agenda of new Prime Minister Liz Truss, the S&P Global/CIPS flash Composite Purchasing Managers’ Index (PMI) fell to 48.4 from 49.6 in August.

It marked the lowest reading since the COVID-19 lockdown of January last year. A Reuters poll of economists had pointed to a reading of 49.0. Any reading below 50 marks a contraction in activity.

The PMI is likely to raise new questions about the health of Britain’s economy, after consumer confidence fell this month to the lowest level since records began in 1974, according to a survey published earlier on Friday.

He said the survey’s forward-looking gauges suggested worse is to come in the final months of 2022.

Kwarteng will give more detail about the government’s fiscal plans, which may amount to more than 150 billion pounds ($169.02 billion) of stimulus – something that could put a floor under declining business confidence.

The PMI’s gauge of future output fell to its lowest since May 2020, when Britain was in the grip of its first COVID-19 lockdown.

Activity contracted in both the manufacturing and services industries.

The PMI for the services sector fell to 49.2 in September from 50.9 in August, the weakest reading since January 2021.

While the manufacturing PMI rose to 48.5 from 47.3, much of the improvement reflected a worsening supply chain performance, which in normal times reflects shortages due to strong demand but not this time.

“Firms often mentioned reducing output volumes due to weaker intakes of new business, though there were also reports that input shortages, particularly electronics, had constrained production at some units,” S&P Global said.

Despite the pound falling to 37-year lows against the dollar, export orders contracted in both the manufacturing and service sectors, S&P Global said.