UK, EU will resume trade talks on Monday By Reuters 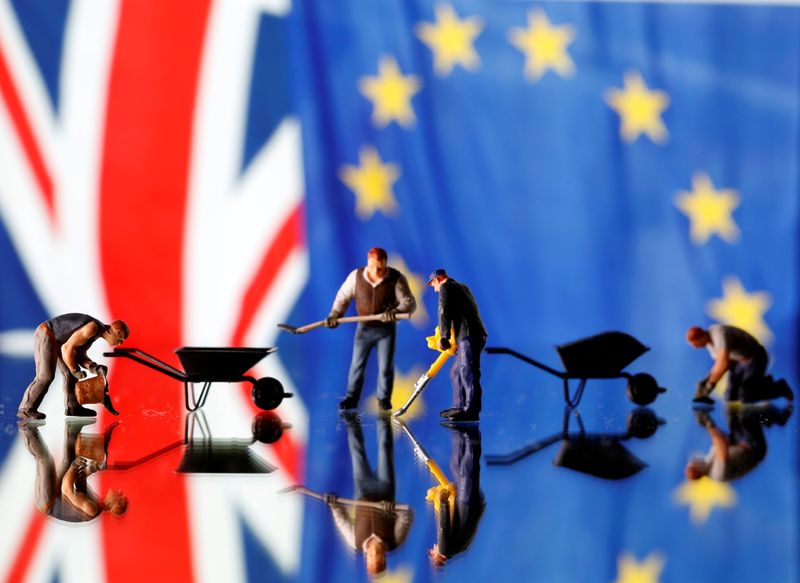 © Reuters. Small toy figures are seen in front of UK and European Union displayed flags in this illustration picture,

LONDON (Reuters) – Britain and the European Union will resume trade talks in Brussels on Monday after so far failing to close gaps between their positions on two of the thorniest issues that have long dogged the negotiations: competition rules and fishing.

With just seven weeks before a status quo transition period ends and Britain completes its Brexit journey out of bloc, both sides have stepped up negotiations on a deal that would protect nearly a trillion dollars of trade from possible disruption.

But after missing a mid-November deadline, British officials say there has been little movement on stubborn differences over fair competition rules and fisheries, with London repeatedly pushing for a deal that would respect the country’s sovereignty.

The EU has urged Britain to compromise, saying its geographic proximity to the bloc means it cannot be handed a deal similar to those Brussels have agreed with countries such as Canada. So far, despite describing some progress, neither side has moved far enough to allow for any breakthrough.

“The talks are continuing in London today, there will be a pause over the weekend and then we are expecting the talks to resume in Brussels on Monday,” a spokesman for British Prime Minister Boris Johnson told reporters on Friday.

“The negotiating teams are working very hard to bridge the significant gaps between us. For our part, we continue to seek solutions that fully respect UK sovereignty but the familiar, difficult issues remain including on the so-called level playing field and fisheries.”

He also moved to deny suggestions that the departure at the end of the year by Johnson’s senior adviser, Dominic Cummings, would mean a softening of position in London, saying: “The government’s position in relation to the future trade agreement negotiations is unchanged.”

While many deadlines have been missed in the years of Brexit talks since Britain voted to leave in 2016, some businesses are getting increasingly twitchy over whether the government is prepared for January without, or even with, a deal.

Many hope that time pressure and a COVID-19 crisis spiralling across much of Europe will focus minds on clinching a deal to avoid chaos in commerce, energy ties and aviation.