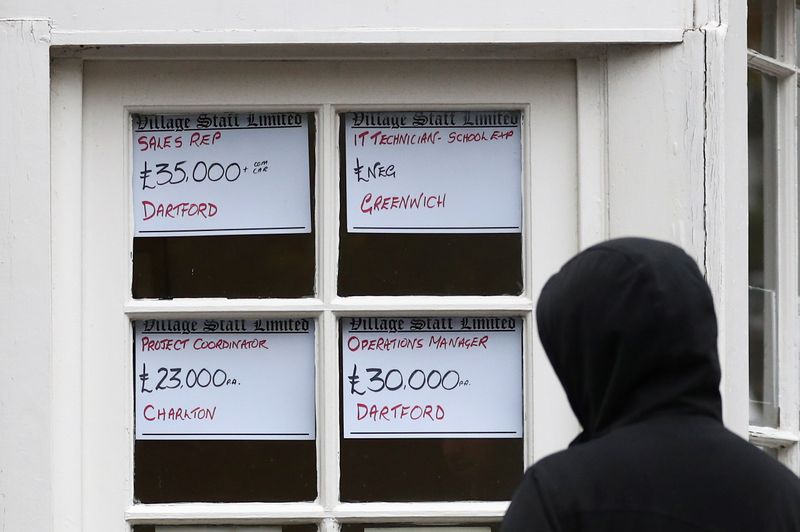 © Reuters. FILE PHOTO: A person looks at adverts in the window of a job agency in London

LONDON (Reuters) – Britain will face a growing skills shortage over the next decade if it does not start retraining and reskilling workers for the shift to a digital-based economy which has been sped up by the COVID-19 pandemic, a McKinsey report said on Monday.

The consultants said their analysis showed 94% of the workforce lacked skills they will require in 2030.

The pandemic had polarised the job market with some skills already in shortage, such as those needed in e-commerce and supply chain analytics, while low-skilled jobs lost during the crisis were unlikely to return, the report showed.

Some of the jobs most at risk include sales roles, retail assistants, receptionists and waiters, traditionally done by part-time staff and often by younger workers.

“Without concerted action by employers, two-thirds of the UK workforce could lack basic digital skills by 2030, while more than 10 million people could be under-skilled in leadership, communication, and decision-making,” the report said.

Britain has long struggled with low productivity levels, with output particularly poor among the lowest-paid jobs, partly due to a lack of training.

The Organisation for Economic Co-operation and Development said in October participation in lifelong learning was higher than the European average but had declined in recent years and in-work training had fallen since the 2008 financial crisis.

Britain’s economy has been hit very hard by the pandemic. Gross domestic product plunged by 20% in the second quarter.

Martin Sorrell, one of Britain’s best-known executives, said last week that Britain could take five to 10 years to properly recover because the financial hit will sap the economy of the firepower that it needs to rebuild for Brexit.