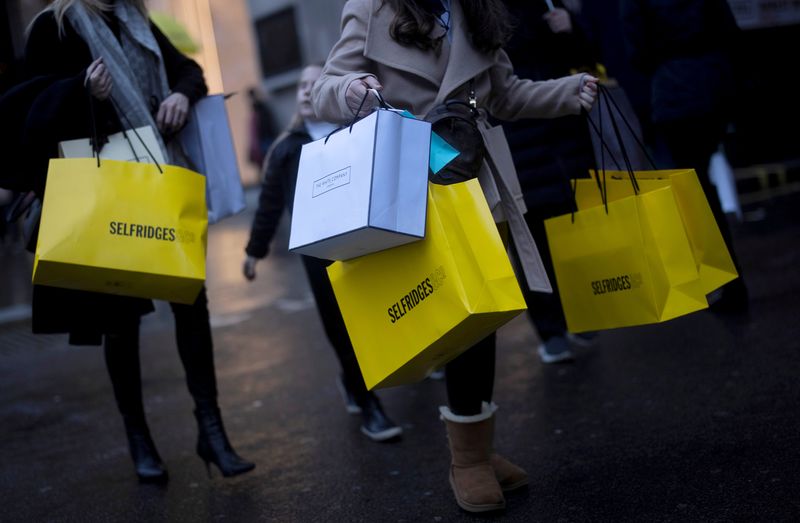 LONDON (Reuters) -Britons cut back on their shopping in February and consumer confidence levels tumbled this month as accelerating inflation cast a shadow over the world’s fifth-biggest economy, data released on Friday showed.

Retail sales volumes unexpectedly fell by 0.3% in February from January. Economists polled by Reuters had on average forecast a 0.6% monthly rise.

Excluding automotive fuel, which rose in price in February as tensions between Russia and Ukraine escalated, sales volumes fell by a sharper 0.7%.

Some of the fall was linked by the Office for National Statistics to stormy weather which kept some shoppers at home while the fading of the Omicron COVID-19 meant people returned to pubs and restaurants at expense of grocery retailers.

But rising prices meant the amount of money spent on food shopping rose, even as volumes fell.

Analysts said the data – combined with a drop in polling firm GfK’s measure of consumer confidence in March to levels last seen in November 2020 – was a taste of things to come as inflation climbs higher.

GfK’s gauge of personal finances for the coming year slumped to a joint record low, matched only by the reading in July 2008 when the global financial crisis was reaching a climax.

Inflation hit a 30-year high of 6.2% in February and the government’s budget watchdog this week forecast it will go close to 9% in late 2022, contributing to the biggest fall in living standards since at least the 1950s.

“Against that backdrop, it seems all but inevitable that households will continue to pare back spending in the coming month,” Bethany Beckett, an economist with Capital Economics, said.

Finance minister Rishi Sunak announced tax cuts this week that he said would help to ease the squeeze on households, but analysts said his plan did little to help those on lowest incomes.

There were some bright spots for retailers.

The easing of the coronavirus crisis, and the subsequent increase in people socialising and returning to workplaces, led to a 13% leap in clothing sales in February from January.

The share of online sales in value terms was its lowest since March 2020 at 27.8% but overall sales were 3.7% above their pre-coronavirus levels of February 2020.

Volumes of fuel bought surpassed their pre-pandemic levels for the first time, although the amount of money spent on fuel grew more quickly, reflecting the higher prices.

Compared with a year earlier, overall sales volumes were up by 7.0%, short of the 7.8% growth expected in the Reuters poll.