UK’s economic recovery fades in October as pandemic flares up 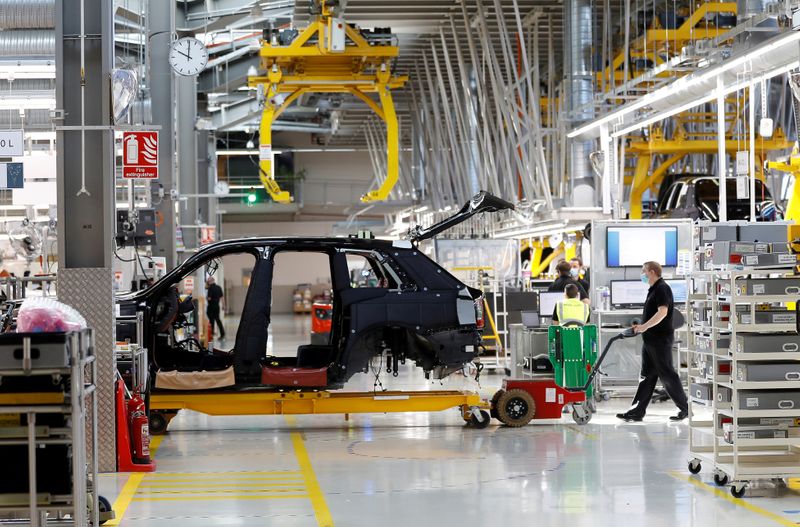 © Reuters. FILE PHOTO: A technician moves the body of a Rolls-Royce Cullinan on the production line of the Rolls-Royce Goodwood factory, near Chichester

LONDON (Reuters) – Britain’s economic recovery has lost more momentum this month as a resurgence of the coronavirus pandemic hit businesses in the hospitality and transport sectors, a survey showed on Friday.

An early “flash” reading of the IHS Markit/CIPS UK Composite Purchasing Managers’ Index (PMI), a gauge of private sector growth, fell to a four-month low of 52.9 in October from 56.5 in September.

A Reuters poll of economists pointed to a smaller decline to 53.9.

“The pace of UK economic growth slowed in October to the weakest since the recovery from the national COVID-19 lockdown began,” IHS Markit economist Chris Williamson said.

“The weakening is most pronounced in the hospitality and transport sectors, as firms reported falling demand due to renewed lockdown measures and customers being deterred by worries over rising case numbers,” he added.

The survey added to signs that the economic recovery is fading as COVID-19 cases surge, prompting some parts of the country to reimpose health restrictions that require pubs and restaurants to close early and limit social gatherings.

Britain’s economy shrank 20% in the second quarter, the largest decline of any major advanced economy, and official data has shown that the initially rapid recovery was already beginning to falter in August.

Since then COVID cases have risen sharply, and on Thursday finance minister Rishi Sunak was forced to expand support for businesses struggling to pay their staff at a time when he had hoped to wean firms off state support.

The services PMI, which covers the bulk of the economy, fell to 52.3 in October from 56.1 in September, its lowest level since June. The survey pointed to a month of heavy job losses.

The performance of the much smaller manufacturing sector was better, although similarly marked by a sharp drop in employment.

The factory PMI fell to 53.3 from 54.1, its lowest since July, though optimism about future output struck a five-year high in October.