When Boris Johnson was challenged last year by a Conservative MP on why he was cutting Britain’s tank force when Russia was massing its army on the Ukraine border, the British prime minister was dismissive.

“The old concepts of fighting big tank battles on the European land mass are over,” Johnson said. Last year’s defence strategy bristled with talk of high-tech weaponry and a “tilt to the Asia-Pacific”.

But Russian armour pouring into Ukraine has sharply refocused Britain’s security policy on Europe, while at the same time opening up the prospect of closer co-operation with a more muscular EU after five years of Brexit strains.

The presence of Liz Truss, Britain’s foreign secretary, as a guest at an emergency EU foreign affairs council in Brussels on Friday was a tentative sign of a broken relationship showing signs of healing.

“Liz has pushed closer UK-EU co-operation during the Ukraine crisis and thinks we need to work more closely together with the EU on security threats full stop,” said one government official.

Truss has argued for an end to the interminable post-Brexit dispute with Brussels over Northern Ireland. “The Russian invasion has focused minds on the big external threats we face as free democracies,” the official said.

Meanwhile, the EU’s rapid and decisive response to the crisis — including a far-reaching sanctions package and Germany’s dramatic U-turn on its post-cold war foreign and defence policy — has won admirers in London.

“The British public has been told for the last five years that the EU is a cumbersome, failing, slow organisation,” said Lord Peter Ricketts, a former UK national security adviser.

“The EU has changed more in the last four weeks that it has in the last 40 years of my career. It’s an absolute transformation of the EU’s thinking about its role in the world. Britain is having to shape it from the outside.”

Johnson’s team insists it was always focused on European security and that Britain was sending troops to the Russian border in Estonia last year even as it was despatching its new aircraft carrier, HMS Queen Elizabeth, to the Pacific.

The UK military budget has increased to 2.2 per cent of gross domestic product and Johnson’s strategic defence review committed Britain “to be the leading European ally within Nato” and to “collective security in the Euro-Atlantic region”.

The emergence of security as the biggest European concern — relegating disputes over trade relations and Northern Ireland to the margins — plays to Britain’s strengths and has helped to restore European relationships.

Tom Tugendhat, chair of the House of Commons foreign affairs committee, said: “The relationship is about democracy and security in Europe — that’s the binding issue.” He said the changed context made it easier to talk about issues such as the so-called Northern Ireland protocol.

Tugendhat argued that with defence — and Nato — at the centre of discussion, Britain felt more comfortable in a debate where nation states — rather than the EU — were coming to the fore. He said: “Fundamentally, defence is national.”

Johnson and Truss’s diplomacy during the crisis has been particularly focused on the Baltic states: Johnson was in Estonia on Wednesday and in central Europe, notably Poland.

Gabrielius Landsbergis, Lithuania’s foreign minister, told the FT: “This is one of the darkest hours in history of the modern day Europe. We feel the strong shoulder of the UK and its contribution to Nato’s eastern flank.”

But Kim Darroch, Britain’s former ambassador to the EU and a former national security adviser, said other European partnerships had been allowed to wither: “All we do is talk to people who agree with us.”

He said relations with France and Germany at leader level remained poor and that not being around the EU table had weakened Britain’s ability to shape the continent’s economic response directly.

However, Truss’s invitation to the EU’s foreign affairs council is a sign of improving UK relations with Brussels. One EU diplomat praised Johnson for showing “leadership” on Ukraine but added that the EU’s priority was to co-ordinate with Washington. “The UK is a small market so it makes much less difference,” they said.

Another said relations had improved markedly in recent weeks. “Close co- operation has moved from the Nato level to the EU level. The UK is part of Europe. It is not a third country like any other and never will be.”

Meanwhile, Ursula von der Leyen, European Commission president, is seen in Downing Street as a key ally in developing a tough response to the Russian invasion.

Another feature of the Ukraine crisis is the relatively low-level of point-scoring by the EU and UK over their respective responses — a modest but important achievement given the fractious state of post-Brexit relations.

Johnson’s government is quietly pleased that it was ahead of the EU in providing weapons to Ukraine and in pushing for Russian banks to be kicked out of the Swift interbank payment system.

Meanwhile, the EU has been ahead of Britain in providing a more generous offer to take in refugees and sanctioning oligarchs linked to Russian president Vladimir Putin. 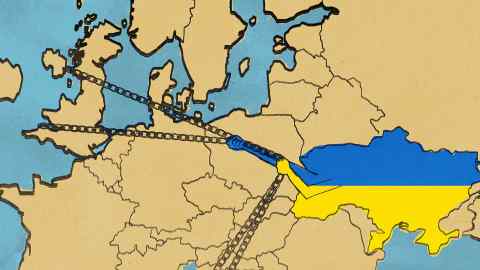 Frans Timmermans, European Commission vice-president, said the UK was “following our lead” on targeting oligarchs, but generally officials in London and Brussels have talked up the strong common response.

Greg Clark, a former cabinet minister who was critical of Johnson over Brexit, said: “It is notable that Britain’s international approach during this crisis has been one of seriousness and leadership.”

Ricketts said: “This crisis has simplified, crystallised and forced choices. The choice is clearly that European security is the number one national security priority for the UK.”

Darroch said the Ukraine crisis might provide a context for a closer UK-EU relationship. “It might have persuaded some people here that Europe can act swiftly and that it is useful, not useless.”