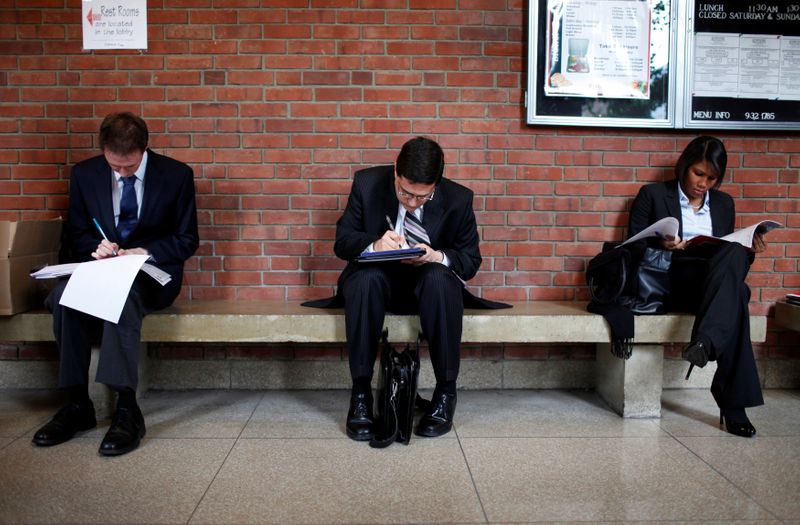 NEW YORK/SAN FRANCISCO (Reuters) – The big decline in the U.S. unemployment rate last month suggests the economy needs less a broad pandemic relief package than targeted support for hard-hit sectors, even as an unprecedented surge in COVID-19 cases raises questions about the durability of the job market rebound.

Overall, more people returned to work in October and the share of people either employed or looking for work increased, data from the U.S. Labor Department showed on Friday. But the report also showed new hiring is slowing, long-term unemployment is on the rise and employment in some struggling industries is still far below pre-pandemic levels.

The sharpening picture of a uneven recovery in the labor market opens a new chapter in what is already a pitched political battle over how much more stimulus is needed, and for what parts of the economy, now that the worst of the crisis appears to be over for the broader economy.

And it came as Democratic presidential nominee Joe Biden appeared on course to clinch a victory over Republican President Donald Trump in Tuesday’s election , even with Republicans poised to maintain control of the Senate – a scenario Wall Street economists say sets the stage for a smaller fiscal package.

U.S. Senate Majority Leader Mitch McConnell told reporters in his home state of Kentucky that the decline in the unemployment rate to 6.9% in October from 7.9% in September shows “that something smaller – rather than throwing another $3 trillion at this issue – is more appropriate.”

McConnell was referring to the amount that Congress has appropriated so far to help the unemployed, millions of other Americans, hard-hit airlines, small businesses, and many other parts of the economy.

The October jobs report suggests the need for more aid is still there, though less like a firehose.

“I think we’ll have a stronger recovery if we can just get at least some more fiscal support, when it’s appropriate… and in the size Congress thinks it’s appropriate,” Federal Reserve Chair Jerome Powell said in a news conference on Thursday after the release of the U.S. central bank’s latest policy statement.

The U.S. economy added 638,000 jobs in October, including 271,000 in the leisure and hospitality industry, which suffered deep job losses earlier this year because of the pandemic.

But employment in that sector was still 21% below the February level, a bigger gap than any other industry and a reminder that consumers are hesitant to crowd into bars and restaurants or to travel as much as they used to. State and local government employment was also down sharply, as lower tax revenues forced budget cuts.

In contrast, hiring in the retail, utilities and finance sectors are nearly back to pre-pandemic levels.

Economists continue to warn that the first jobs gains are the easiest, and that after a partial recovery the labor market may be in for a slow slog. Meanwhile the number of new COVID-19 cases in the United States rose 18% last week to a record 575,000, with deaths up 3% to 5,700, according to a Reuters analysis of state and county reports.

Headwinds from the new COVID-19 surge ahead of the winter could easily derail economic progress, said Daniel Zhao, senior economist with Glassdoor, a jobs and recruiting website. “This puts responsibility in the hands of policymakers and the next president to manage both the health and economic crises.”

The number of people who are permanently unemployed was nearly unchanged at 3.7 million in October, while the number on temporary layoffs dropped, a sign that more of that group may be finding jobs.

But the number of people who are long-term unemployed, or those out of work for at least six months, surged in October to 3.6 million from 2.4 million in September.

“It’s a big jump, and doesn’t bode well for those workers or labor market recovery,” said Kathryn Anne Edwards, a labor economist for the RAND Corporation.

And with much of the pandemic-related unemployment benefit programs depleted by the end of the year, more help may be needed, some economists say. “I think there is clearly a need to provide additional assistance to those displaced from the labor market,” said Richard Moody, chief economist at Regions Financial (NYSE:).