US Data And Ongoing Brexit Disagreements


Change Of Tone In Brexit Deal

Yesterday, the day was filled with data and various news from around the world. One of the main news out of the European political life was surrounding the Brexit deal negotiations. If Monday was full of positive headlines that there is progress in the Brexit talks, on Wednesday it was a different picture. The air was filled with skepticism that a deal could be reached. Boris Johnson reassured that UK’s position on fisheries has not changed and that there won’t be any extension of the transition period.

“Later on, we will get the minutes from the last FOMC meeting. Investors will try to seek clarity on how policymakers are willing to proceed further. During the previous meeting, the Fed decided to take a wait-and-see approach, because of the uncertainty surrounding the US elections. The Committee had state last time that they are ready to use all available tools to support the US economy”.

However, once again, the Irish Prime Minister tried to clear up the tensed air by stating that he believes a deal could be reached, but maybe on a “staged basis”, and that good results can be achieved in extra time. This, of course, suggests that Ireland could consider an extension, if needed.

In our Tuesday’s report we said that the “95%-agreement”, which has been praised in the beginning of this week by both sides, is not something to be very happy about, as it misses out some important topics like fishing, governance and dispute resolution. And as we already know, neither of the sides are willing to back off from their positions. The pound could still remain under slight buying interest, especially against the currently-weaker US dollar, as there are still no big official negative headlines that are hitting the wires.

Looking at the technical picture of this morning, we can see that the rate is already knocking on the door of its key resistance barrier, at 1.3397, which is currently the highest point of November. At the same time the pair continues to balance above a short-term upside support line drawn from the low of Nov. 4. Although everything is pointing towards a continuation move higher, in order to get comfortable with higher areas, at least in the near term, we would prefer to wait for a move above that 1.3397 hurdle first. Until then, we will remain somewhat positive.

If, eventually, the pair does pop above that 1.3397 zone, this move may clear the path for a further uprise, possibly targeting the 1.3482 area, marked by the highest point of September. The rate might stall there for a bit, or even correct back down. That said, if GBP/USD continues to trade above the aforementioned upside line, we could see the bulls stepping in again. If so, another push higher, and this time a break of the 1.3482 obstacle, could send the pair to the highest point of December 2019, at 1.3514.

Alternatively, if the previously-discussed upside line breaks and the rate slides below the 1.3304 hurdle, marked by the low of November 25th, that may scare the bulls from the field temporarily and allow more bears to join in. GBP/USD may then travel to the 1.3263 zone, which is the current low of this week, where the pair could stall temporarily. However, if the sellers are still strong, a break of that zone may result in GBP/USD falling to the 1.3195 hurdle, or the 1.3165 level, marked by the lows of November 19th and 16th respectively.

With the US markets closed today and having a half day on Friday, the country dropped a pile of data yesterday for the market to digest. Also, on the US political side, the new president-elect Joe Biden was in a rush this week to deliver his nominees for different cabinets.

But one of the most important news from all that was the fact that Joe Biden nominated and confirmed Janet Yellen as the next head of the Federal Reserve. Before Jerome Powell was assigned by Donald Trump in 2018, Janet Yellen was already the head of the Federal Reserve and held that position for 4 years, between 2014 and 2018. Investors took the news positively, as Yellen is a key supporter of keeping interest rates low, in order to continue supporting the economy.

On the data front, the US released a bunch of key economic indicators, where some came out as a disappointment. The price index came out slightly lower than expected, at 0.0%, whereas the expectation was for a +0.1% figure. The price index also showed up at 0.0%, however there was no initial forecast available, but the previous number was at +0.2%. declined and dropped, however, increased slightly. Another disappointment was the preliminary QoQ Q3 figure, which came out as previous +33.1%, missing the initial forecast by a tenth of a percent. But, probably, the biggest setbacks were the and jobless claims figures. Initial claims showed up at 778k, which is higher than the forecast of 730k and the previous 748k. Continuing jobless claims were above the forecast, but below the previous, coming out at 6071k. The and the took a slight hit, however the technology sector was still at its best, helping to close slightly in the positive territory. 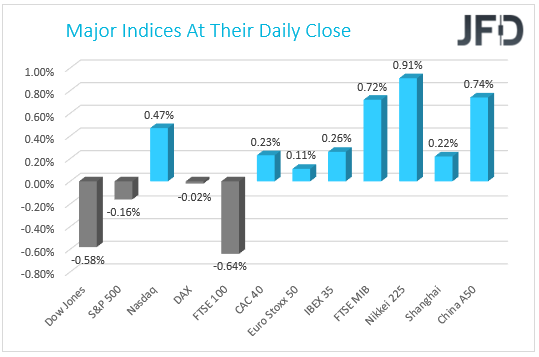 This week, continues to slowly grind higher, trying to get closer to its all-time high on the cash index, at 12465. The index is also trading above a short-term tentative upside support line drawn from the low of Nov.10. For now, the price may continue slowly drifting higher, as long as it continues to trade above 12091 hurdle, which is the high of last week.

A further push north could bring the price closer to the 12257 barrier, marked by the high of Oct. 13 and an intraday swing low of Nov. 9. NASDAQ 100 might get held there temporarily, however, if the buyers are still feeling comfortable, they may overcome that obstacle and target the 12415 barrier, marked by the current highest point of September. Slightly above it lies the all-time high, at 12465, which could get tested as well.

On the downside, if the price breaks the previously discussed upside line and also slides below the 11875 hurdle, marked by the lows of Nov. 20 and 24, that could open the gate for a further slide. NASDAQ 100 might then drift to the 11800 obstacle, or even to the 11705 zone, marked by the current low of this week and an intraday swing high of Nov. 11 respectively. The index may get halted around there for a bit, but if the sellers are still active, the next possible target might be at 11511, which is the low of Nov. 10.

As For The Rest of Today’s Events

During the early hours of the European morning on Thursday, the Swedish central bank will take center stage, as it will deliver its . In the latest monetary policy report delivered by the Riksbank, it states that the Swedish economy has managed to recover somewhat after the sharp decline experienced in spring of this year. The Bank will continue providing support to the economy and it is believed that the repo rate will stay the same, at 0.0%. 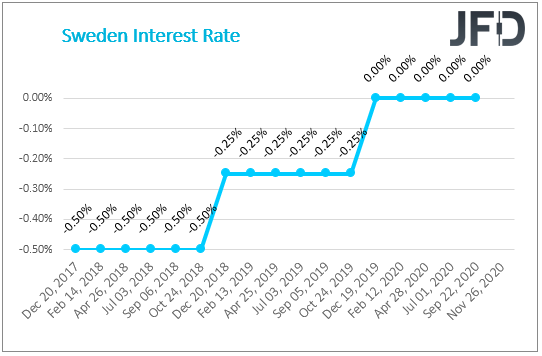 Later on, the ECB will publish its account of monetary policy meeting from its October meeting, which might show further monetary easing, in order to continue supporting the eurozone.