The benchmark S&P 500 fell 2 per cent, its biggest loss since May, as more than 85 per cent of the stocks in the index declined. The tech-heavy Nasdaq Composite slid 2.8 per cent, its largest fall since March, while Europe’s Stoxx 600 index closed 2.2 per cent lower.

The equity market sell-off was fuelled by the continued slide in Treasury prices as investors reposition themselves for the prospect of more hawkish central bank policy.

Yields on government bonds, which move inversely to prices, have risen dramatically since policymakers at the Federal Reserve and Bank of England signalled last week that interest rate hikes may come sooner than expected in the face of persistently higher inflation.

“The last three or four days, the market has been trying to price in a faster Fed,” said Priya Misra, global head of rates strategy at TD Securities. “It’s a more hawkish message that’s making its way into the rates market.”

The five-year Treasury yield, which moves with interest rate forecasts, hit its highest level in over a year on Tuesday, a clear sign investors were beginning to worry about higher inflation and slower growth.

Concerns over rising prices were compounded by a sharp increase in commodity prices, Brent crude, the international oil benchmark, briefly traded above $80 a barrel for the first time since October 2018, driven higher by hurricanes curtailing US production and surging natural gas prices.

The yield on the 10-year US Treasury note, which acts as a benchmark for borrowing costs for companies and households worldwide, rose 0.06 percentage points to 1.55 per cent, a level not seen since June. And the UK 10-year gilt yield briefly breached 1 per cent for the first time since March of last year.

The move in yields has pummelled stocks, with losses centred in the tech sector, many of which have borrowed at cheap rates to fuel growth. An index of non-profitable tech companies run by Goldman Sachs ended the day down 5 per cent.

Tech stocks have been particularly sensitive to moves in interest rates expectations because their valuations are tied to the company’s prospects for growth years into the future. If interest rates and inflation are both rising, investors are likely to mark down their views of how valuable that future growth will be.

“When bond rates go up it makes equities look less attractive, and particularly those whose dividend yields are very small, such as in the technology sector,” said Rebecca Chesworth, senior equities strategist at State Street Global Advisors’ SPDR ETF business.

Last week the Fed said it could easily move ahead with a reduction of its $120bn-a-month of bond purchases. The world’s most influential central bank also revealed that half its monetary policymakers expect the first post-pandemic interest rate rise in 2022.

A day later the Bank of England warned that UK inflation could top 4 per cent into next year, sparking expectations it was moving closer to raising interest rates from record lows. 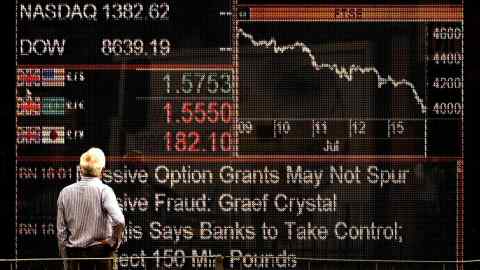 Testifying to Congress on Tuesday, Fed chair Jay Powell said supply-side constraints that have kept headline US inflation above 5 per cent for three consecutive months were “larger and longer lasting than anticipated”.

Market measures of inflation expectations have risen in recent days but on Tuesday the most noteworthy move was in real rates — Treasury yields stripped of the effects of inflation. The 10-year real yield rose 0.03 percentage points to minus 0.86 per cent, its highest level since June, reflecting the shift in how investors perceive shifts in Fed policy will blunt inflation.

The US Conference Board’s consumer confidence index, published on Tuesday, hit a seven-month low in September. The study’s authors cited concerns about the highly infectious Delta variant of the coronavirus for the drop.

The dollar index, which measures the greenback against a basket of six rival currencies, reached its highest level since November. The pound sterling dropped 1.2 per cent against the dollar to purchase $1.354.

Robert Armstrong dissects the most important market trends and discusses how Wall Street’s best minds respond to them. Sign up here to get the newsletter sent straight to your inbox every weekday