Vaccine Gives Markets A Shot In The Arm


News earlier in the week that a vaccine from Pfizer (NYSE:) and Biontech (NASDAQ:) demonstrated more than 90% effectiveness against COVID-19 has helped propel stocks higher as investors apparently are pricing in a faster-than-expected economic recovery. A vaccine could help make social distancing less important, which would help retailers. A rebound in travel would help airlines.

As part of the expectations for an economic reopening, investors have been dumping some of the stocks that have benefited from the stay-at-home trade and favoring those of the so-called re-opening trade.

They’ve also been rotating out of growth stocks, such as tech-related shares, and into value stocks. That has caused tech shares to lag. But this morning technology companies seem to be getting their mojo back, as evidenced by a strong outperformance in futures tied to the tech-heavy .

All of the FAANG stocks are up this morning. Having borne a big chunk of the selling, these names are now seeing investment flow back in. Despite the rotation into value stocks, it seems like the FAANGS might regain some of their leadership as the economic recovery isn’t going to happen overnight, even with a vaccine.

The vaccine gains are coming on the heels of U.S. elections, which also helped to boost stocks. Many investors have been thinking that a split Congress will preclude any sweeping legislation on taxes or healthcare, and Wall Street seems to like the status quo. But keep in mind that runoffs in Georgia will determine whether Republicans maintain control of the Senate. As that deadline approaches in January, investor unease could ratchet up.

But for now, tensions have eased back, with Wall Street’s main fear gauge, the Cboe Volatility Index () falling to around 24 this morning.

The Energy sector has by far been the worst performer of the this year, losing nearly 44% year to date through yesterday’s close. So it was quite interesting to see Energy as the best performing sector yesterday by a good margin even after huge gains the day before (see chart below).

Energy’s outperformance Tuesday, which came as prices also rose, seems to be a marker of much-increased hopes about a vaccine. Apparently, the idea is that a vaccine will allow an economic revival where travel will increase and boost demand for oil, benefitting the companies that produce it. But expectations of future oil demand are only half of the equation—supply remains something to keep an eye on. To that end, consider keeping an eye on the monthly report from OPEC, expected later today.

Still, the re-ignited Energy sector is part of the so-called “reopening” trade that includes companies such as airlines, hotels, cruise lines, and Uber (NYSE:)—which took out its all-time high this week—that would benefit from an economy where people are traveling again. Under this scenario, the Industrials sector (), which includes airlines and road and rail transportation companies, also did well yesterday.

Does Stay-At-Home Trade Have Staying Power?

As investors rotate into reopening stocks, they’ve been coming out of stocks in the “stay-at-home” trade—such as Peloton (NASDAQ:), Zoom Video (NASDAQ:), and Netflix (NASDAQ:)—that have benefited from more people working, learning, and entertaining themselves at home.

But as Tuesday’s trade shows, this rotation isn’t going to be a straight line. NFLX and PTON had decent gains on Tuesday, perhaps as investors figured they’d gotten oversold earlier in the week. Meanwhile, Zoom lost another 9% after getting pummeled on Monday.

It seems that the realization is continuing to sink in that a vaccine won’t be widely available for some time even in the best case scenario. Meanwhile, COVID-19 cases—and more importantly, hospitalizations—are on the rise across the U.S. Also, we don’t have a stimulus package from Congress, and a split among lawmakers on Capitol Hill could mean that only a smaller package gets approved.

So there could still be substantial economic pain that keeps companies that would benefit from reopening down for a while some of the stay-at-home names continue to have some life to them.

Markets have been in “sprint” mode since the election. But the challenges of 2020 were always going to be a marathon. 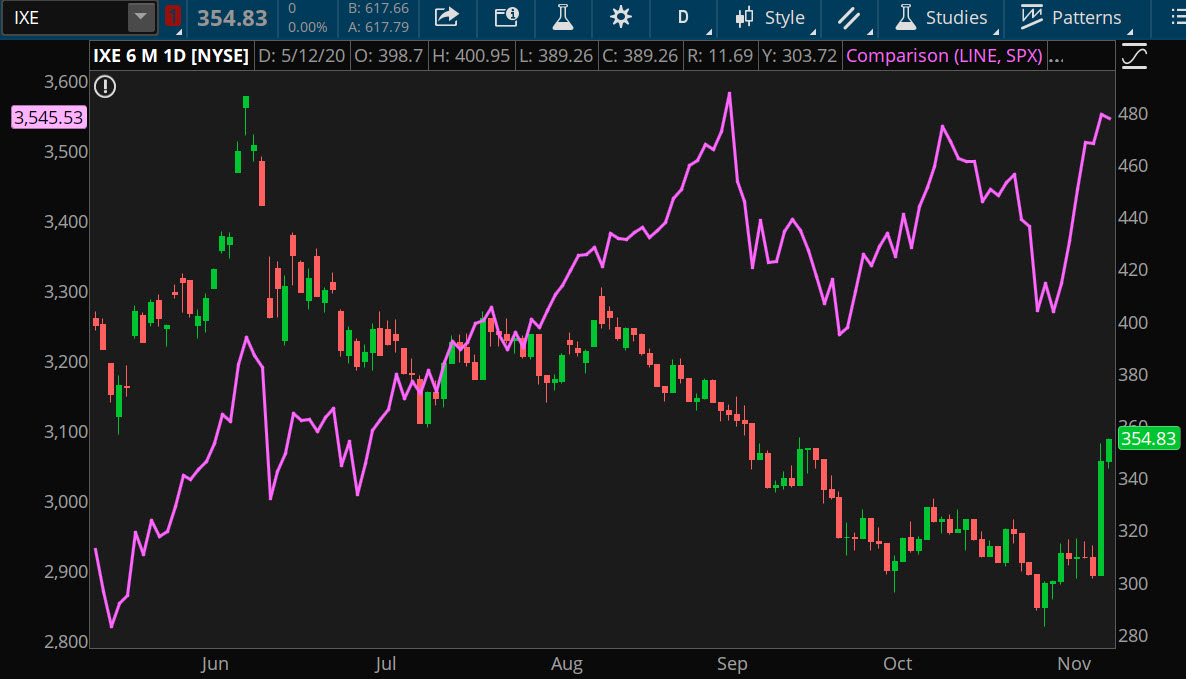 Chart source: The thinkorswim® platform from TD {{0|Ameritrade}}. For illustrative purposes only. Past performance does not guarantee future results.

The S&P 500 Energy Sector (IXE—candlestick) has been on a tear amid expectations that a coronavirus vaccine will stimulate the economy and boost demand for oil. Energy companies had been dramatically underperforming the S&P 500 Index (SPX—purple line) as the economic downturn has dampened the outlook for oil demand. Data source: S&P Dow Jones Indices.

Changes at the Fed Ahead? Will it Even Matter?

A new administration could shake up the Fed a little, though Fed Chairman Jerome Powell’s term doesn’t expire until a year from February. A “leading candidate” for Treasury secretary under President-elect Biden is Fed governor Lael Brainard, the Washington Post and other media outlets reported Monday. Brainard served in the Obama administration and has broad policymaking experience, particularly during economic crises.

Obviously, it’s way too soon to predict, but if Brainard does leave the Fed, it would potentially give Biden a chance to replace Brainard at the Fed with someone who reflects his own economic views. Of course, in the current era of bargain basement rates and robust use of monetary policy to help stimulate growth, the old phrase, “We’re all Keynesians now” might be appropriate. It’s not as though the Fed under Trump has been acting the way you might expect under a conservative administration, mainly due to the unprecedented times we’re in that most economists agree call for a very hands-on central bank. The point is, a Biden replacement for Brainard—or even for Powell (in 2022)—wouldn’t necessarily transform the tenor on Constitution Ave. or make investors more worried, say, about a dovish Fed unintentionally igniting inflation. How times have changed.

Some Restaurants Part of Reopening Trade Too

As we’ve talked about the “reopening” stocks, we’ve focused a lot on travel and tourism. But it’s also worth exploring the restaurant industry. To be sure, some restaurant stocks such as Domino’s Pizza (NYSE:) and Chipotle Mexican Grill (NYSE:) have had a decent run during the pandemic as they were already set up with a delivery business model or have found ways to connect with more customers digitally, or a combination of both. But other restaurants haven’t done as well, and their stocks seem like they have room to the upside once they are able to pack their dining rooms again.

As examples, Starbucks (NASDAQ:), Darden Restaurants (NYSE:), and Ruth’s Hospitality (NASDAQ:) all rallied Monday amid the “reopening” trade. But as that frenzy eased, these stocks pulled back as the reality sank in that the vaccine thing is still going to take a while. For restaurants that aren’t as readily in demand from the stay-at-home crowd as, say, Papa John’s (NASDAQ:), it seems like socially distanced dining rooms will continue to be a headwind for a while. Still, despite Tuesday’s pullbacks SBUX, DRI, and RUTH are all up for the week so far as investors seem to hold more optimism for an economic recovery than before the vaccine news.

Tech is Not Dead: The Information Technology sector () was the worst-performing in the SPX yesterday, losing nearly 2% as investors rotated out of growth and into value stocks. But consider not writing tech’s eulogy just yet, especially with this morning’s trade. True, Wall Street is forward looking, and there is probably something to the tech repricing that we’ve seen. But it seems that there’s still a strong case for tech companies.

There’ll probably be more remote working after the pandemic than before, and that will require chips, cloud services, and data centers. Plus, during the interim before a vaccine becomes widely available, investors may want to continue keeping more money in mega-cap tech-related companies, such as the FAANG stocks, than they might have if the pandemic hadn’t happened. That has been a popular trade as market participants want stock market returns given low interest rates but also want the relative safety of the larger, established companies amid the economic recovery.