If there was any question about how highly strung investors are over COVID-19, the announcement by Pfizer (NYSE:) and BioNTech (NASDAQ:) on Monday that preliminary trials showed their experimental vaccine to be 90% effective provided the answer. In the aftermath, even as equity markets popped, Treasury yields shot up to levels not seen since the onset of the pandemic in March.

Investors sold off Treasuries, with the yield on the note spiking to over 0.97%, some 15 basis points higher than the 0.821% hit late Friday, before retreating to about 0.96%. 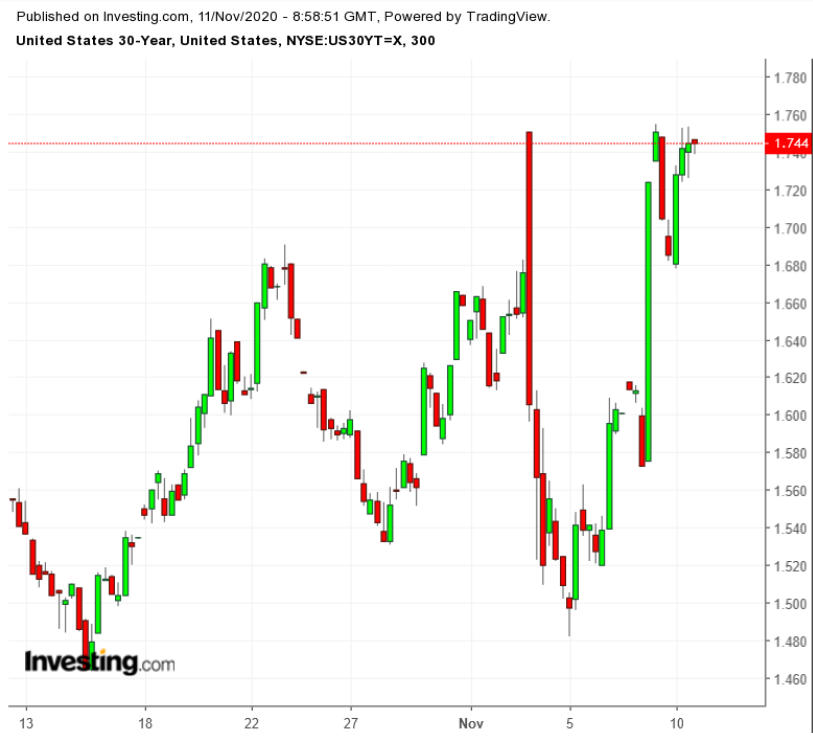 The spike in the yield—bond prices move inversely to yields—more than made up for dimmer prospects for fiscal stimulus after the from the US election.

There was talk of a “vaccine moment” and speculation that widespread availability of a vaccine next year might make the Federal Reserve revise its timeline for interest-rate changes.

The immediate question is how long this vaccine moment will last. The results are preliminary and it will still take months to make a vaccine widely available, even with an expedited approval process. The of infections could make that wait seem long. 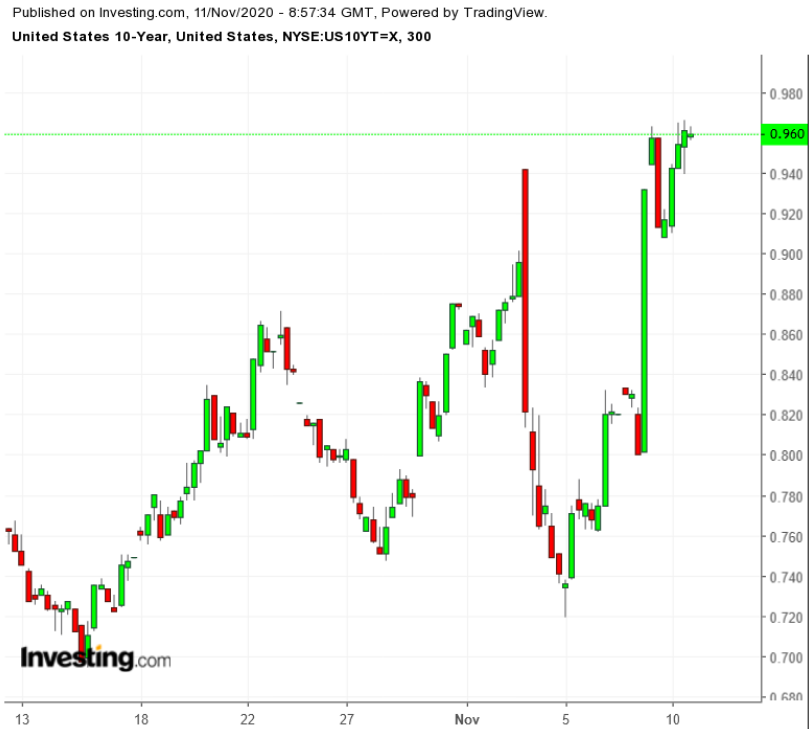 The likelihood is that Treasuries will remain , as the election news already roiled markets. The failure of a “blue wave” to materialize in the form of a Democratic sweep sent the 10-year yield plunging to near 0.70% from over 0.90% on optimistic bets that Democrats would be able to push through a stimulus of trillions of dollars.

An effective vaccine would significantly improve the economic outlook, making investors more likely to desert Treasuries and take on more risk. But while some analysts are saying the 10-year benchmark will cross the 1% threshold and go as high as 1.25%, others are more cautious.

As new infections are hitting records daily and US cases topped 10 million on Monday, it looks like the pandemic will get much worse well before a vaccine is available. The timing of an approval is up in the air and wider trials may expose safety risks.

Even if a stimulus bill is passed before the end of the year in a lame-duck Congress, it will probably be less than half the $2.2 trillion last sought by Democrats, leaving pressure on the Fed to provide more monetary accommodation and depressing yields.

Nor is the Fed likely to abandon its near-zero interest rate policy anytime soon, which many analysts see as a check on bond yields. Aside from the pandemic, the Fed is still far from reaching its 2% target for inflation.

Yields on euro area government bonds also rose on the vaccine news. The yield on Germany’s benchmark bond rose more than 11 bps, nearing -0.505%. (BioNTech is a German firm based in Mainz that is one of the pioneers in the messenger RNA technology used in the vaccine.)

Meanwhile, yields on Italian government bonds and those of other peripheral countries rose off record lows. The yield on Italy’s benchmark bond rose more than 10 bps to top 0.72%.

The European Union proceeded on Tuesday with its second issue of bonds to support its SURE unemployment program. The €8 billion in five-year bonds and €6 billion in 30-year bonds were oversubscribed about 10 times after the first issue of €17 billion last month was oversubscribed more than 13 times for a record €233 billion.