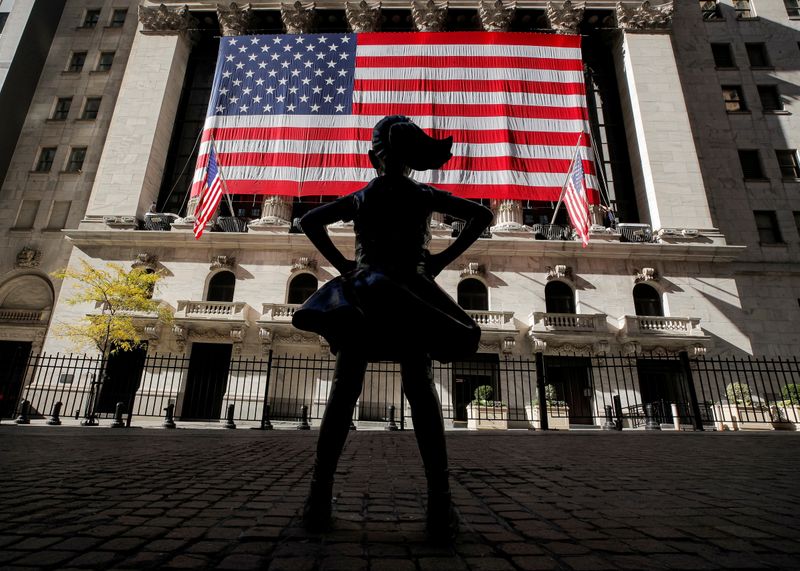 © Reuters. FILE PHOTO: The Fearless Girl statue is seen as the U.S. flag covers the front facade of the NYSE in New York

By Shriya Ramakrishnan and Medha Singh

(Reuters) – Wall Street’s main indexes were set to open near all-time highs on Friday as worse-than-expected jobs growth in November spurred bets of a new fiscal stimulus package to help lift the economy from its worst downturn in decades.

Nonfarm payrolls increased by 245,000 last month after rising by 610,000 in October, the Labor Department said on Friday. That was the smallest gain since the jobs recovery started in May.

“For now, the job market recovery is over until the winter wave of COVID-19 is behind us,” said James McDonald, CEO and chief investment officer of Hercules Investments, based in Los Angeles.

“Whether or not we see a double-dip recession in the U.S. depends on the interplay between the severity of the shutdowns and their impact on the economy over the winter and the size of potential stimulus from Congress and the Federal Reserve.”

A $908 billion stimulus plan gained momentum in Congress on Thursday after a months-long standoff between Republicans and Democrats over aid for businesses and millions of people affected by virus-led shutdowns.

The two parties also face a Dec. 11 deadline to pass a $1.4 trillion budget or risk a shutdown of the government.

“The market is going to be focused on the progress that is being made on the aid package. We are getting very close… I wouldn’t be surprised to see some sort of deal, as early as Monday,” said Peter Cardillo, chief market economist at Spartan Capital Securities in New York.

Positive vaccine updates from major drugmakers have eased worried around grim economic data and a surge in infections, setting the Wall Street’s main indexes for another week of gains after the benchmark S&P 500 clocked its best November.

The United States set single-day records for new infections and deaths on Thursday, with California’s governor saying he would impose some of the nation’s strictest stay-at-home orders in the coming days.

Growing confidence that a working COVID-19 vaccine would be administered before the end of the year pushed the hardest-hit airlines and tourism sectors higher.

Shares of U.S. carriers and cruise lines including American Airlines (NASDAQ:), Norwegian Cruise Line (NYSE:) and Carnival (NYSE:) Corp were up between 2.4 and 4% in premarket trade.

Oil majors Occidental Petroleum Corp (NYSE:) and Chevron Corp (NYSE:) rose about 1.5% each premarket, boosted by a rise in crude prices as major producers agreed on a compromise on supply. [O/R]

Drugmaker Pfizer (NYSE:) dipped 0.4%, extending declines from the previous session when it flagged challenges in supply chain for raw materials used in its COVID-19 vaccine.

Pfizer’s vaccine has already been approved by regulatory authorities in Britain, while the U.S. Food and Drug Administration is expected to take a decision after an advisory panel meeting on Dec. 10.

KLM, Delta to offer COVID-19 tested flights from Amsterdam to Atlanta By Reuters