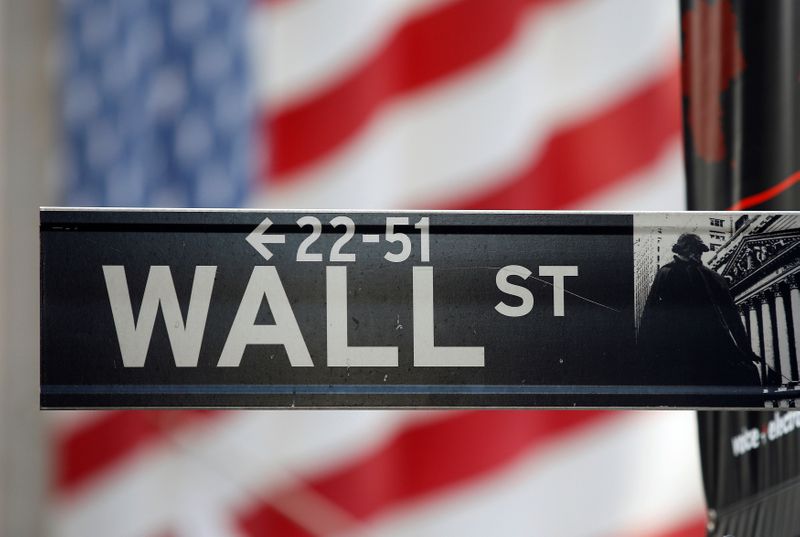 © Reuters. FILE PHOTO: A sign for Wall Street is seen with a giant American flag in the background across from the New York Stock Exchange

NEW YORK (Reuters) – The is poised to climb 9% between now and the end of 2021 as the anticipated widespread release of a COVID-19 vaccine drives an economic and corporate earnings recovery from the pandemic, according to a Reuters poll of strategists.

After a more than 60% recovery from the March lows of the outbreak to a record high on Nov. 16, the benchmark index is now up about 10% in the year to date.

The index is expected to end 2020 at 3,600, close to its current level, according to the poll median.

Recent evidence of high efficacy rates in experimental COVID-19 vaccines has driven an advance in equities this month, and strategists in the poll cited progress in the vaccine as the main factor behind their forecasts.

“They assume a vaccine is widely available starting some time in the second half of 2021,” said Sameer Samana, senior global market strategist for Wells Fargo (NYSE:) Investment Institute, which has a 2021 year-end forecast for the S&P 500 of 3,900.

With a big pickup in the economy expected to follow, Wall Street is likely “grossly underestimating” next year’s rebound in earnings, said Jim Paulsen, chief investment strategist at The Leuthold Group in Minneapolis, who sees the S&P 500 ending next year at 4,100.

“That’s one thing I think could be a huge driving force,” for stocks, he said.

Asked when earnings will return to pre-COVID-19 levels, most respondents said it would happen within a year.

Graphic: When will corporate earnings return to pre-COVID-19 levels in the U.S. stock market?, https://graphics.reuters.com/USA-STOCKS/POLL/jbyprebdzve/chart.png

Recent hopes related to the vaccine have breathed new life into cyclical stocks, such as industrials and energy shares, which investors dumped earlier during the pandemic.

Some strategists predict the gains in cyclicals will extend far into 2021, but others say the rotation may not be long-lived.

Jonathan Golub, chief U.S. equity strategist at Credit Suisse (SIX:) Securities, is neutral on cyclicals heading into 2021. In his outlook for next year, he wrote that, “the fundamental case for TECH+ remains compelling” based on expected growth in sales and margins, among other factors. He forecasts the S&P 500 will end next year at 4,050.

Investors were upbeat after Democrat Joe Biden’s win in the U.S. presidential election without a “Blue Wave” sweep by Democrats earlier this month, a feeling that’s likely to linger if a divided Congress means limited regulatory changes and Biden’s Cabinet picks are market-friendly.

On Monday, investors cheered reports that Biden had picked former Federal Reserve Chair Janet Yellen to be the next Treasury secretary.

Strategists in the poll said expectations the Fed will remain accommodative help to bolster the case for equities next year.

(This version of the story corrects attribution of the poll to Reuters in the headline. The poll was not conducted in collaboration with IPSOS.)