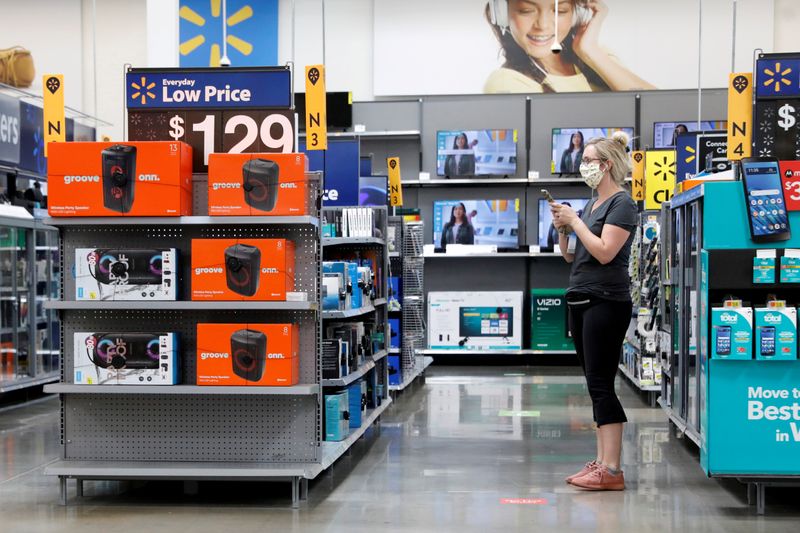 © Reuters. FILE PHOTO: A shopper is seen wearing a mask while shopping at a Walmart store in Bradford, Pennsylvania

By Melissa Fares and Aishwarya Venugopal

(Reuters) – Walmart (NYSE:) Inc said on Tuesday it was optimistic about its holiday sales prospects in a pandemic-ridden year after the big-box retailer beat Wall Street expectations for quarterly results as Americans increasingly shift their spending online.

The surge in demand for essentials at Walmart seen at the peak of the coronavirus lockdowns has carried into the second half of the year, with consumers relying on its same-day delivery and store pick-up services to buy everything from groceries to sporting goods.

This helped its U.S. e-commerce sales grow 79% with strong results across all channels and helped boost same-store sales and profit margins. Walmart has doubled down on its investments in e-commerce and in September launched a subscription service Walmart Plus, touted as a rival to Amazon.com (NASDAQ:)’s Prime subscription, which includes perks like free shipping and streaming services.

The company did not disclose any metrics about the new service that costs $98 per year and offers services such as unlimited free delivery, fuel discounts and no checkout lines.

“With Holiday in full-swing, we expect Walmart to continue its tradition of being one of the true pace-setters, and the efficiency with which it has integrated its two channels (store and online channels) will serve it well as promotional activity kicks up,” Moody’s (NYSE:) analyst Charlie O’Shea said.

The COVID-19 pandemic has forced retailers to drastically rethink how they do business during the key holiday season, with many big retailers including Walmart, Kohl’s (NYSE:), Target (NYSE:), and Best Buy moving their promotions to as early as October.

“This holiday season will obviously be unique … While many family gatherings may be smaller, we do believe families want to decorate, celebrate and enjoy food and gifts,” Chief Executive Officer Doug McMillon said on a call with analysts.

An early start to the holiday season has helped Bentonville, Arkansas-based Walmart “gives customers the opportunity to come to stores when they aren’t as crowded as they typically would be on a one-day Black Friday type of event,” Chief Financial Officer Brett Biggs told Reuters.

Still executives warned of continued pressure from COVID-19 related expenses. It incurred about $600 million in additional costs that included higher wages for warehouse workers and bonuses for store employees in the quarter and about $1.5 billion in such expenses in the prior quarter.

With COVID-19 cases rising in much of the United States and across the world that has forced countries like the UK to go into another lockdown, CEO McMillon said that Walmart was reinforcing safety procedures and has resumed limiting the number of shoppers allowed in stores at one time.

McMillon also called for Washington to help small businesses get through the next phase of the pandemic, while congratulating U.S. President-elect Joe Biden on his victory, saying that he was looking forward to working with the administration.

Sales at U.S. stores open at least a year rose 6.4%, excluding fuel, in the third quarter ended Oct. 31. Analysts had estimated an increase of 4.16%, according to IBES data from Refinitiv.

Operating income jumped 22.5% to $5.79 billion in the third quarter, while Walmart reported adjusted earnings per share of $1.34 that topped expectations for $1.18.