Weather-tracking blockchain in West Africa, but transparency on a raincheck 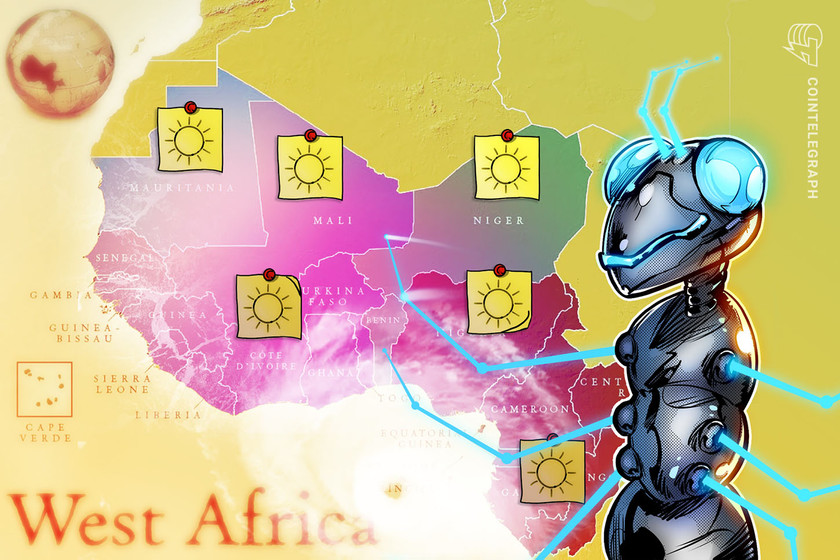 West Africa is home to an estimated 381 million people and counting. Unfortunately, the region was also found to be a hotspot for climate change, which will likely impact crop yields and food production while causing damage to its unique wildlife.

At the same time, West Africa is well on its way to becoming the next blockchain hotspot as well, with the region continuing to show interest in cryptocurrency and digital solutions. In 2019, Nigeria ranked as the number one country for Bitcoin searches on Google, which may be linked to the prominence of fintech adoption across the continent. For example, according to the Ernst & Young 2019 Global Fintech Adoption Index, one of the countries leading the push, South Africa, ranks as the fourth-largest emerging market by interest in fintech.

Due to Africa’s acceptance for new technologies and crypto, the region is arguably an ideal place to implement blockchain-based solutions to combat ongoing geographical challenges.

One of the companies hoping to make a difference is Telokanda — an open-source weather technology company launched by a former Boeing and NASA engineer — has released a blockchain-based weather balloon initiative. Telokanda has partnered with the blockchain platform Telos to upload weather data generated from weather balloons, which are high-altitude devices that collect and transmit information about atmospheric pressure, temperature, humidity and wind speeds via a small sensor called a radiosonde.

The sensors transmit data to the Telos blockchain in real time, where the information is then stored on RAM. Telokanda uses this data to alert first responders of severe weather conditions up to 12 hours in advance. The company is also prototyping a text messaging service to automatically notify citizens when balloons detect harsh weather conditions.

Douglas Horn, chief architect of Telos, told Cointelegpraph that the Telokanda weather balloon project is currently being piloted in West Africa due to the urgent need for weather data in the region:

“The lack of weather information in Africa has powerful negative effects on the local population, who must get by without modern weather forecasting. This is also a global challenge, as the lack of data in Africa limits meteorological predictions in the Atlantic and beyond.”

Data shows that weather observations coming from Africa mainly exist as incomplete, paper-based records. Even with assistance from the World Meteorological Organization in Geneva as well as Germany’s meteorological service Deutscher Wetterdienst, regions in Africa are hesitant to digitize historical climate data. According to a Nature article, millions of weather records in Africa remain in cardboard boxes and rely on obsolete technology while digitization efforts are held up due to data ownership and distribution issues.

Despite the region’s challenges in record-keeping for weather conditions, Telokanda founder Nicolas Lopez told Cointelegraph that the company’s interest is to work in West Africa partly because collecting its weather data is important for U.S. insurance companies analyzing the risk of hurricanes originating off the coast of Africa. “It’s a unique region where knowing the weather is not only helpful to local populations, but also the U.S. thousands of miles away,” he said.

While Telokanda’s sensor-equipped weather balloons work to collect data in West Africa, the Telos blockchain provides public transparency, allowing anyone to use and access the information collected. Although data transparency and the use of that information by others has been frowned upon by Africa’s weather officials, Horn asserted that the project can prove its value. “We want to make the data collection method as open-source as possible, so that anyone can contribute,” he said.

According to Horn, once a weather balloon transmits data to the Telos blockchain, a smart contract triggers payments in Telos tokens (TLOS) to a user’s digital wallet. Participants are rewarded up to 1,000 TLOS, or approximately $15, which can then be converted to the Nigerian naira or Ghanaian cedis using the Sesacash payments platform. Exchanges or automated market makers on Telos can also exchange TLOS instantly for a variety of dollar-backed stablecoins or the South African rand.

The cryptocurrency incentive is an important feature of Telokanda’s weather balloon project, especially in regions like Africa, which have suffered from high inflation rates and volatile national currencies. For example, a recent report covering the state of crypto in Africa states that over the past 10 years, the South African rand has lost over 50% of its value against the dollar. The report then notes that, due to this and other economic challenges, Africa is an ideal region for crypto adoption.

While innovative, challenges around data sharing may hamper adoption for Telokanda’s weather balloon project. According to a United Nations 2018 report on climate data sharing in Africa — which reviews the World Meteorological Organization resolution 40 on policy and practice for the exchange of meteorological data and products that regulates international data sharing — major barriers remain when it comes to efficiently sharing data in Africa.

The report notes that strategic barriers include an absence of legal obligation in the WMO resolution 40 to make data available domestically or for international use. In addition, the document states that national laws and legislation in Africa restrict access to weather data due to concerns about national security. Moreover, many governments in the region lack understanding of the value of data sharing and the infrastructure required for such. While cryptocurrency is adopted with open arms in Africa, data transparency via blockchain networks may not be so welcome.

Although this may be, Lopez remains hopeful, noting that Telokanda has already completed seven prototype launches in North America and Nigeria, and is now opening its program more broadly. Lopez further commented on cryptocurrency adoption:

“The biggest hurdle we see is actually access to Eosio currency in some countries, as this has to be done on a country-by-country basis. In Senegal for example, we want to provide wind direction data to drone operators, but there’s no clear exchange for the currency.”