Conflicting reports about the US president’s health could trigger additional market uncertainty as this coming trading week begins on Monday. As well, renewed Congressional efforts in Washington to reach a compromise on fiscal stimulus will likely amp up .

Comments by House Speaker Nancy Pelosi on Friday, that she would work to find compromise with Republicans on a stimulus bill, helped indices trim losses after news broke before the day’s market open that President Donald Trump had tested positive for COVID-19. Though all major US indices—the , , and the —finished the week lower, losses on the SPX were cut in half post Pelosi’s remarks.

However, on Friday night, after trading closed for the week, Trump was hospitalized. In a video , “Trump told Americans that the next few days will be the ‘real test’ of his treatment.” Reports concerning his condition have been conflicting. The president’s doctors have said he’s doing “very well” and is fever-free, but one assessment by a senior White House official noted, “we’re still not on a clear path to a full recovery.”

Whatever the ultimate outcome, expect Trump to ramp up his anti-China rhetoric, since he’s has been blaming the Asian nation for the virus for months now. We’d be surprised if Trump doesn’t frame this as personal; he’s been trailing in the polls, making it all but certain he’ll leverage this to marshal his base by finding an enemy in China.

Notwithstanding what the president may say, the three significant headwinds he continues to face heading into the November election aren’t going to disappear anytime soon:

1. Pandemic Management: The psychological impact of a president hospitalized for coronavirus brings this risk back into the spotlight, even after both markets and the US economy appear to be recovering from much of the damage wrought by the pandemic. Still, fresh cases across the country persistently remained above 40,000 a day last week, roughly 38% higher than April levels when widespread lockdown measures were in effect.

Clearly, the pandemic is an ongoing presence, an economic, market and societal pressure. Though progress has been made toward an effective vaccine, a useable inoculation, not to mention a cure, has not yet been invented. And even when an effective treatment does emerge, we’re not totally optimistic it would work against a virus that continues to mutate, nor that distribution will be able to efficiently allocate the drug to much of the world.

2. Slowing Economic Recovery: Friday’s release disappointed. The headline number showed only 661,000 jobs were created in September, versus 850K expected. On the face of it, the overall print did show an improving labor market, with the beating estimates, coming in at 7.9%.

However, the slowing momentum on jobs creation, which was about 200,000 short of consensus estimates, is of concern. Plus the headline number was weaker than the revised 1.5 million jobs added in August. In the final analysis, after five consecutive months of job gains, there are still 6.8 million more unemployed US workers than in February, before the pandemic.

Moreover, this week past week, (NYSE:) announced layoffs even as the major US airlines anticipate looming reduncancies.

3. Republicans And Democrats Unable To Agree On Additional Stimulus: The strongest equity rally in decades, since the March bottom, was largely due to aggressive global fiscal stimulus. The US Federal government injected almost $4 trillion in an effort to lubricate the country’s economy, pulled by the pandemic into the worst recession since last century’s Great Depression.

Even after US central bank officials pleaded with lawmakers to launch badly needed additional stimulus to prop up the flagging economy, the two parties remain divided on the amount necessary to sustain the recovery without needlessly inflating the country’s already ballooning debt, its highest since WWII.

Though last week the majority, Democrat-led House of Representatives passed a $2.2 trillion coronavirus bill, edging closer to the $1.6 trillion plan floated by the White House, doubts remain whether the majority Republican Senate will agree to that number.

With Trump’s positive diagnosis and all its implications for political instability, it’s unclear how additional stimulus now might actually boost markets already braced for chaos even before Trump’s illness added a huge dollop of uncertainty.

Last week equities finished a turbulent September down 4%, as the six-month rally from the March low took a breather. On Thursday, the S&P 500 is likely to retreat after completing a return move to a rising flag. 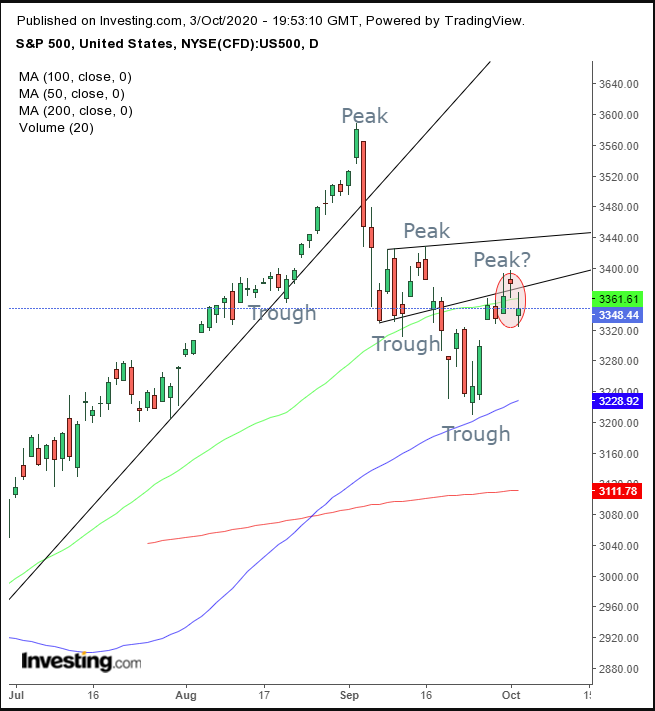 While the benchmark climbed back into the flag on Thursday, it respected the high of Wednesday’s shooting star. On Friday though, it fell back, completing an Evening Star—a reversal pattern—confirming the flag’s resistance.

As we’ve noted frequently, the has never closed the rising gap created by the coronavirus-related February selloff. 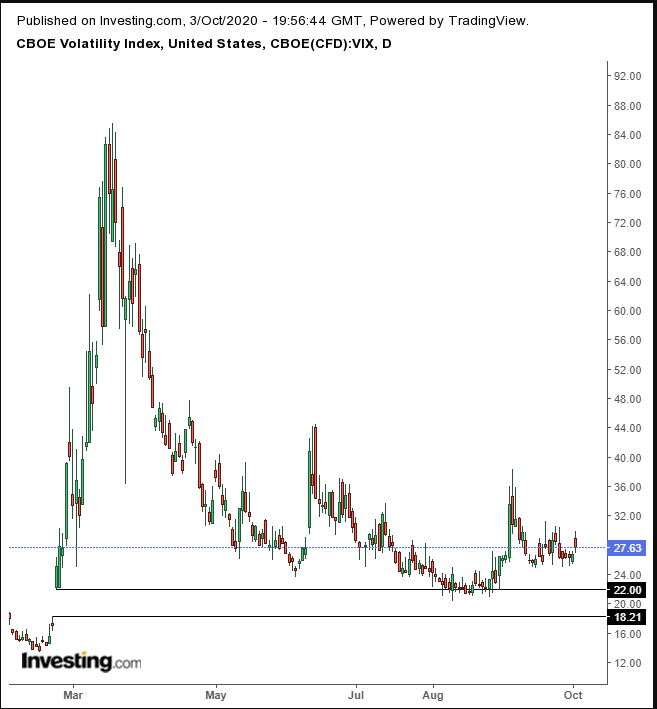 This factor continues to demonstrate that investor confidence has not yet been restored to pre-pandemic levels.

Nevertheless, bond traders appear to care more about the increased likelihood of a stimulus deal. Treasury yields, including for the note, bounced back from a sharp decline after news broke about the president’s diagnosis. 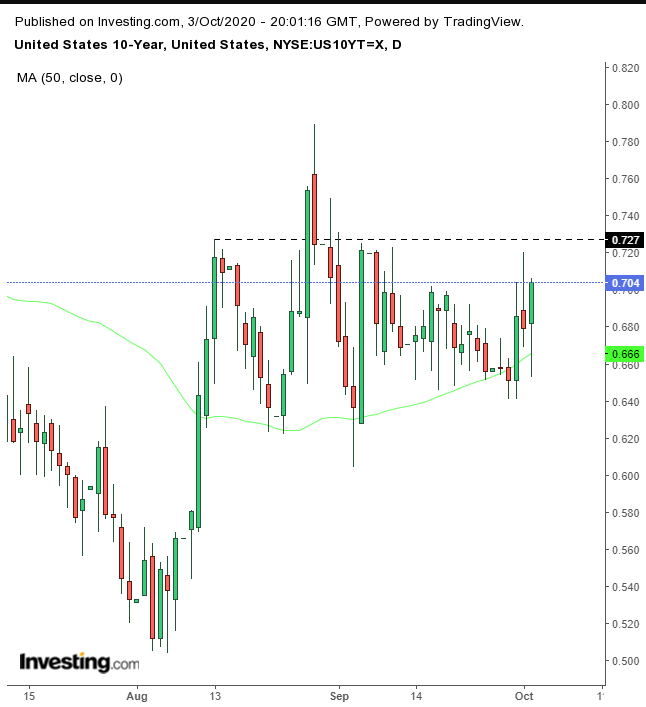 Still, rates continue to hover well below the Aug. 13 highs, the left shoulder of a H&S top, keeping the reversal pattern in play. The 50 DMA marks a natural neckline.

The climbed along with Treasuries. The USD opened Friday with a sharp decline that lasted approximately two hours, erasing the preceding five-hours-worth of gains accumulated late Thursday.

After the NFP release the greenback rebounded. However, it failed to maintain its positive momentum. 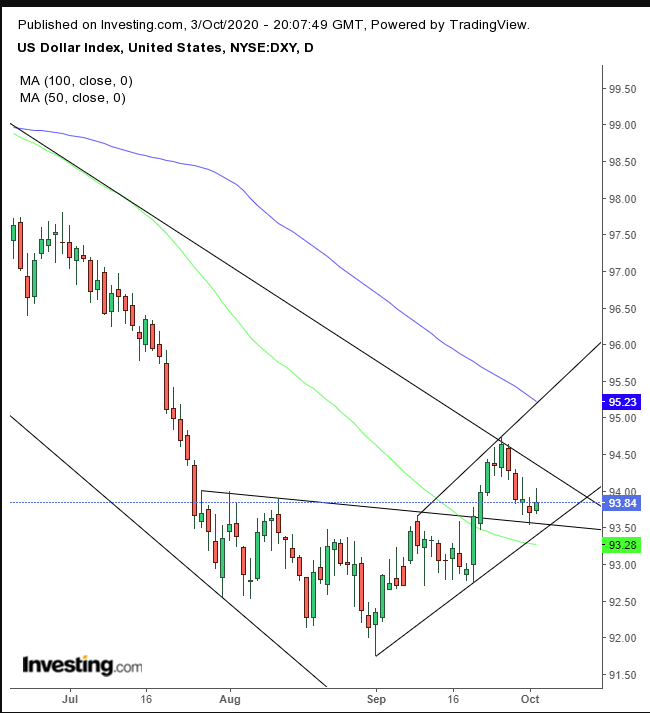 From a technical perspective, the USD extended Thursday’s rebound from the neckline of a bottom, after finding resistance at the top of a falling channel since March. The 50 DMA joined the neckline of the bottom, while the 100 DMA has been keeping arm’s length from the channel top, after being dragged down by it in June.

In a mirror image to the stronger dollar, weakened. 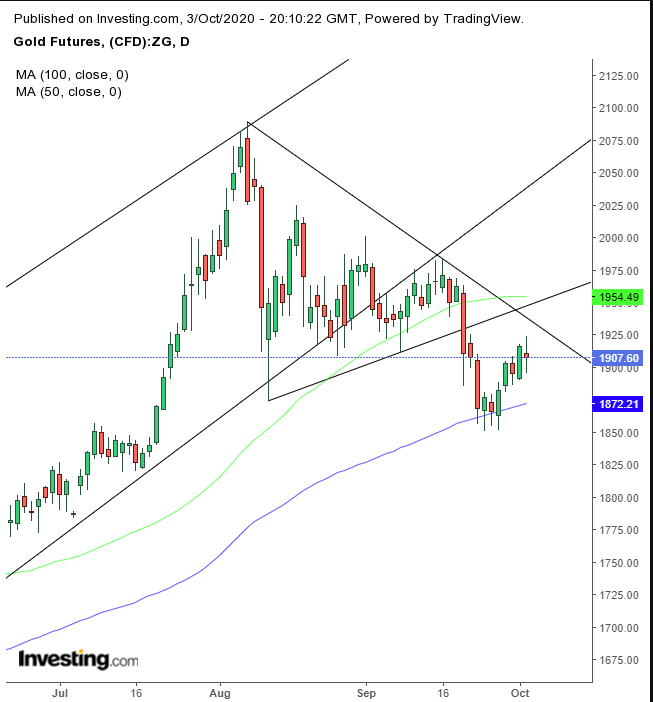 Technicals are suggesting the return move, after the yellow metal completed a bearish symmetrical triangle that pushed it below its rising channel since the March bottom, might be over. Note, however, that the long-term trend remains up and the exceptional uncertainty after Trump’s diagnosis could end the short-term downtrend. 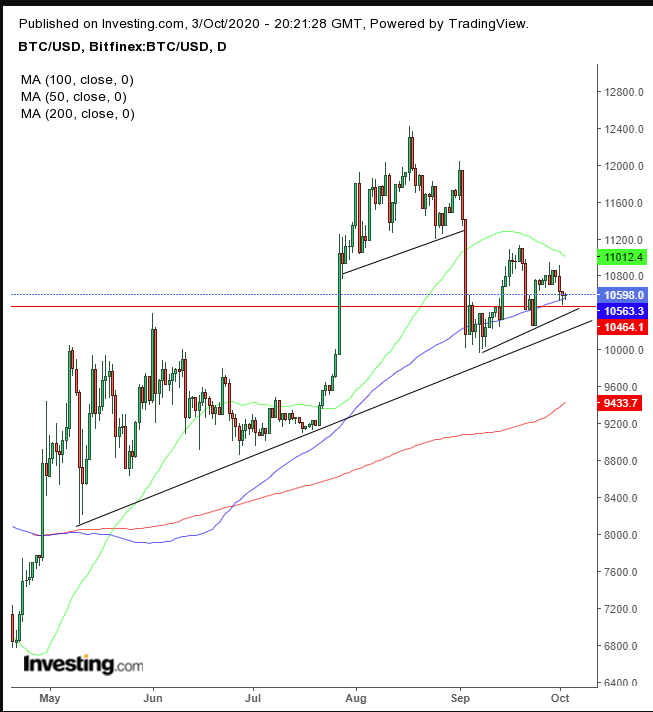 The digital currency is developing a small, month-long H&S continuation pattern, with the 100 DMA supporting its neckline, after the 50 DMA failed to support the preceding H&S that developed in August. Instead, it flipped to resistance, pushing along the current H&S top to completion.

If the current pattern completes with a downside breakout, Bitcoin will have completed a much larger, upsloping H&S top since May, whose neckline is loosely supported by the 200 DMA. Should this scenario play out, it would constitute .

sold off for a second day on Friday, reaching its lowest level in over three weeks. It’s now 29-cents away from it lowest point since May. Friday’s drop blew out any possibility of a bullish flag, after the commodity faced off the much larger bearish rising wedge. A drop below $36 would establish a downtrend.